Skip to content
HomeProjectsProjectsArduinoUsing a Soil Moisture Sensor with Arduino

Hi guys, welcome to today’s tutorial. Smart farms are becoming very popular as everyone is beginning to see the benefits in terms of crop health and yield and I know a lot of people that will be interested in smart farm automation. That’s why today, we will be looking at how to use a soil moisture sensor with an Arduino to determine the moisture content in the soil.

Soil moisture is generally the amount of water that is held in spaces between soil particles. It’s is a very important factor that determines the growth of crops and their health.

Some of the features of this sensor include:

The probe of the sensor shown below consists of two large exposed pads that are used to test the electrical conductivity of the soil.

Our goal for this tutorial is to demonstrate how to use this interesting sensor by measuring the soil humidity and displaying the value either on the Arduino Serial monitor or on the Nokia 5110 LCD.

The following components are required to build this project;

These components can all be bought via the link attached to each of them.

Connect the components as shown in the image below. 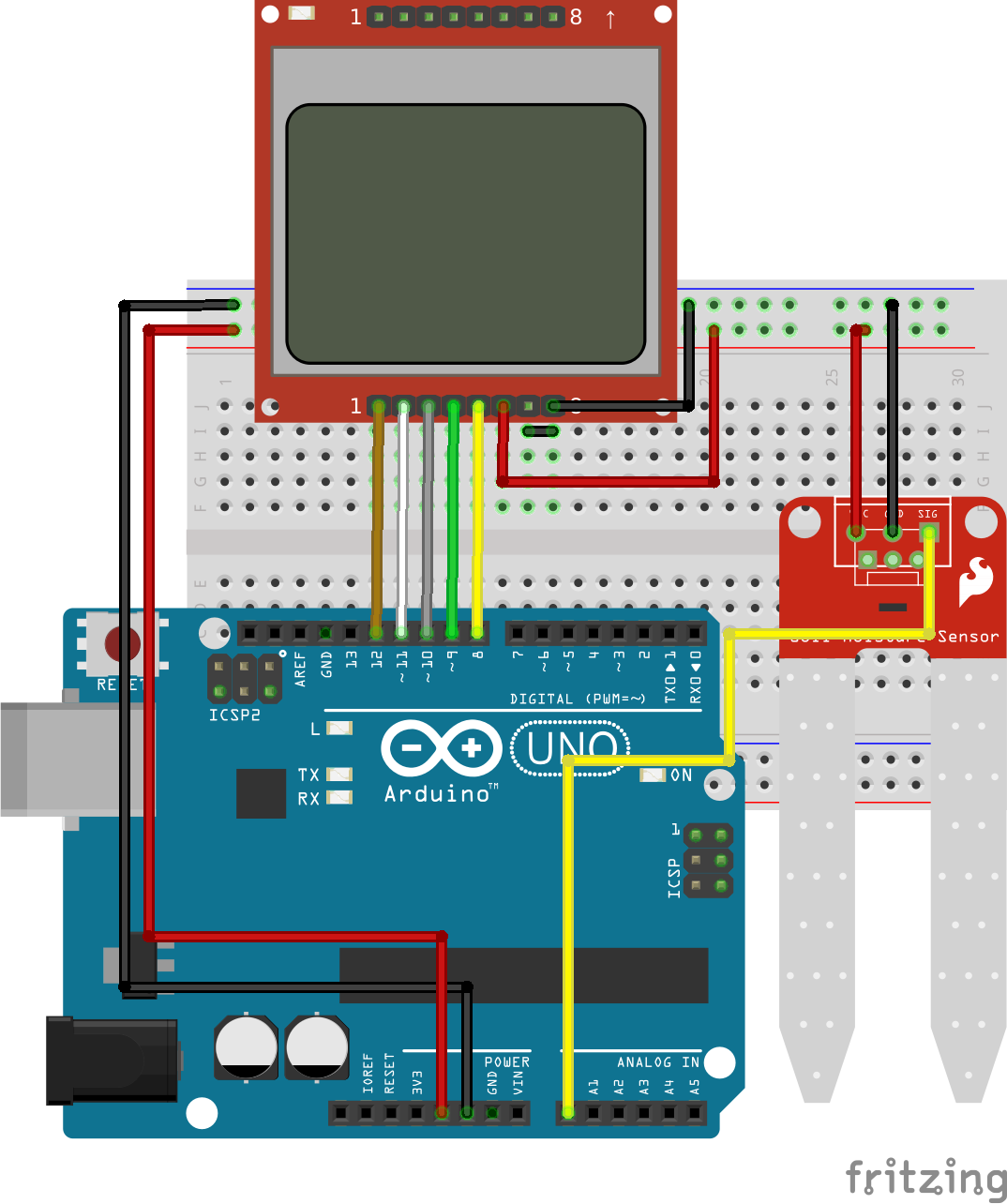 The pin connection between the Arduino and the soil moisture sensor is described below to make the schematics easier to follow.

We have covered how to use the Nokia 5110 LCD display in several tutorials on this website so I won’t be going into the details of how to use the display. For those who may find it difficult to follow the schematics, the pin connections for the LCD is also described below.

Go over the connection once more to ensure everything is connected as it should be.

Two Arduino sketches are provided for this tutorial. The first one is for those who are comfortable with displaying the data on the serial monitor while the second sketch contains the code necessary to display the soil humidity percentage on the Nokia 5110 LCD display. Since we have covered the use of  Nokia 5110 LCD display in several tutorials on this website, I will only explain the first sketch which contains the code to obtain the soil moisture level and display on the serial monitor.

The concept behind the code for this tutorial is simple, since we know the range of the Arduino ADC is between 0 and 1023, we are sure whatever readings the sensor provides will be within that range, thus, when we read the analog value provided by the soil moisture sensor, we use the Arduino map function to convert whatever value was read to a value between 0 and 100, indicating a percentage. The percentage is then displayed on the serial monitor or on the LCD Display. A percentage is used for good UX as it is easier for the user to understand.

To briefly explain the code, the first thing we do is to declare the analog pin of the Arduino to which the moisture sensor is connected after which we declare other variables that will be used later on in our code.

Next, we move to the void setup() function where we initialize the serial communication so we can display data on serial monitor.

Next is the void loop() function. We start the function by reading the value from the sensor then we call the convert to percentage function after which we display the converted value on the serial monitor.

The code for the conversion to percent function is shown below. As mentioned earlier, it takes in the analog value and converts it to the percentage value using the Arduino map function.

The procedure described above is the same for the second sketch, we only need to include dependencies required for the Nokia 5110 LCD Display.

The complete code for the project is attached under the download section of this tutorial.

Upload the code to your Arduino and setup the system with the soil sensor dipped in a fairly dry soil you should see the LCD/serial monitor display the amount of water in the soil as shown in the image below.

By adding a little amount of water to the soil, the resistance in the soil is lowered and you can see the change immediately on the Display/serial monitor as shown in the image below.

This project is a big step towards smart irrigation system as the change in the soil level can be set to activate a relay to turn on a pump to water plants once the water level is low.

That’s it for this tutorial guys, don’t forget to leave questions, and comments, in the comments section of the tutorial.

Till next time, Keep Building!