FM radio transmitters and receivers are one of the projects that fascinated a lot of people and drove them to become makers. The lure of being able to deploy your own radio station, or build your own surveillance(-like) devices was what encouraged most of us to build our first fm transmitter or receiver. Nowadays, microcontrollers help simplify and add a lot of functions to analog projects that’s why for today’s tutorial, we will look on how you can build an Arduino based FM radio receiver using the TEA5767 FM radio and an Arduino Nano.

At the heart of today’s project is the cheap TEA5767 FM radio module. This module comes with all the components required to build a FM radio receiver, all on board. The module is based on the TEA5767GH which is a single-chip, electronically tuned, FM stereo radio for low-voltage applications with fully integrated Intermediate Frequency (IF) selectivity and demodulation. Through an I2C interface, the module can be connected to a microcontroller to digitally control its tuning frequency and other characteristics, giving room for opportunities to digitize some of its operations. It comprises of two headphone jacks, one of which is for connection to an headphone/speaker while the other is for connection to the antenna which usually comes with the module.

Some of the features of the TEA5767 chip are outlined below:

More info on the chip can be found in its datasheet.

For this project, we will connect the FM module to Arduino nano, so we will be able to set its tune frequency, display its signal strength, current frequency, stereo mode and other. The Nokia 5110 LCD will be used as the system’s display, providing visual feedback to the user while potentiometers are used to set the frequency and volume of the radio receiver. Turning the knobs in one direction will increase the volume or increase the frequency (depending on the particular knob being turned) and vice versa. 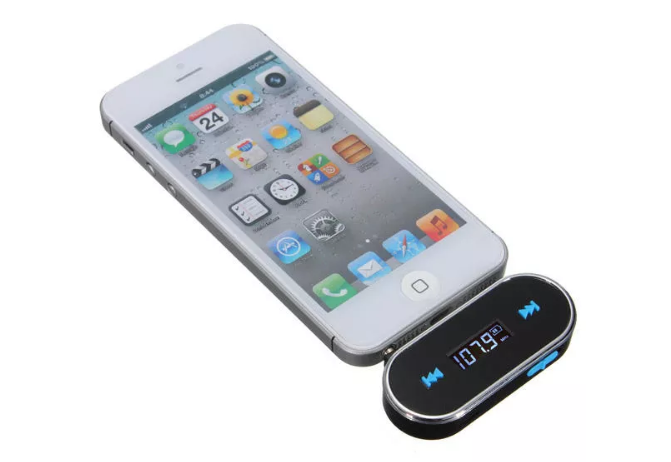 To test our radio receiver when the built is finished, we will use a small inexpensive FM radio transmitter (pictured above) which can be connected to our mobile phone to broadcast sound coming from it. Be sure to only use this within the limit defined for unlicensed broadcasting in your country, state or region.

We will need the following parts to build this project;

As usual, the exact model of these components that will be used for this tutorial can be bought via the links attached. The total cost of the project is around 15$ and could be lesser if you already have some of the components at home. The power bank is only used to make it easy to use the radio without being it tethered to a PC.

Connect the components as shown in the schematics below;

As usual, a pin to pin description of the connection between the components is shown below;

A lot was done using the Nokia 5110 LCD display in this tutorial, as such, it might be beneficial to check out some of our past tutorials, especially the tutorial on displaying custom graphics on the Nokia 5110 display.

With the components all connected, we can now proceed to write the code for the project. The sketch for today’s project relies heavily on two libraries; the LCD5110_Graph library and the TEA5767N library. The LCD5110_graph library facilitates interaction with the Nokia5110 LCD display, making it easy to display graphics and text using functions, while the TEA5767, facilitates the interaction between the microcontroller and the FM Radio module.

To do a quick run through the code and provide an explanation to some of the concepts, we start the sketch as usual, by including the libraries that will be used for the project.

Next, we declare the analog pin to which the potentiometer that controls the frequency is connected and also create variable names to hold the values of the raw value of frequency (int), current frequency, previous frequency alongside a variable to store the signal strength of the FM signal.

With this done, we proceed to write the void setup() function. We start the function by initializing the radio module, setting the mono reception and instructing it to cancel stereo noise. Next, we initialize the display using the initScreen() function and display the splash screen. The splash screen for this project was developed using photoshop and converted to a byte array using bitmap converter. You can check out one of our past tutorials on displaying custom graphics with the Nokia 5110 display to better understand how that works.

Next, is the void loop() function. We read the values from the potentiometer that controls the frequency every few milliseconds and map it to our frequency value.

In case there is no significant change in frequency, the last frequency is retained and displayed along with the signal strength and the stereo.

Go over the connections once again to ensure everything is as it should be, especially the connection between the external amplifier and the speaker. With that done, connect the Arduino to your computer and upload the code. Ensure all the libraries have been installed to prevent errors. With the code upload successful, after a couple of seconds, you should see the splash screen come up as shown in the image below.

This will then be followed by the main window which displays the current frequency to which the radio is tuned.

Turn up the volume and tune the radio to any of your local stations, you should now be able to hear the radio. Another way to test your receiver is to use an inexpensive radio transmitter which can be connected to your mobile phone and tune the radio to its frequency. However, be sure to ensure you are within the provisions of the law of where you are, this last approach may be classified as unlicensed broadcasting in some places.

That’s it for this tutorial guys; your own personal FM Radio Receiver. While this system is characterized by the poor audio output, with the use of a better amplifier to improve the sound, and a 3D printed or CNC machined enclosure, it could be transformed into a fantastic retro styled FM radio like the one in the image below. Feel free to reach me via the comment section for answers to any question you might have about this project. Look forward to seeing your Retro FM radios.

The video version of this tutorial is available on youtube.

Any tips for automatically switching off the amp when the headphones are connected?

if used without the initialization the loop would not be executed, and the pot value would not be red. then the frequency would not change, abd stand for 87 only.