I started playing with electronics back when I was 10 years old in Argentina, where I grew up. Then I got my ham radio operator license when I was 16 years old and I was very active in the ham club and on the air. It was then when I built my first vacuum tube transmitter and refurbished and old receiver (also vacuum tubes) that somebody from the club was throwing away. My interest for science and electronics grew and I ended studying physics but always tinkered with electronics, whenever I could.

I’ve moved a lot around the world for work (oil and gas) so my dedication to ham radio pretty much faded away. But it came back! Just recently, I got my ham radio operator license back and started to get active on 2mtr and on digital.

Due to lack of space outdoors, I had to settle for installing my center fed dipole on the attic (I have a long attic), but I quickly realized I needed more than 1 antenna. 80 mtr, 40 mtr, 20mtr….

And I didn’t want to run multiple lines to the attic, so an antenna switch was necessary. 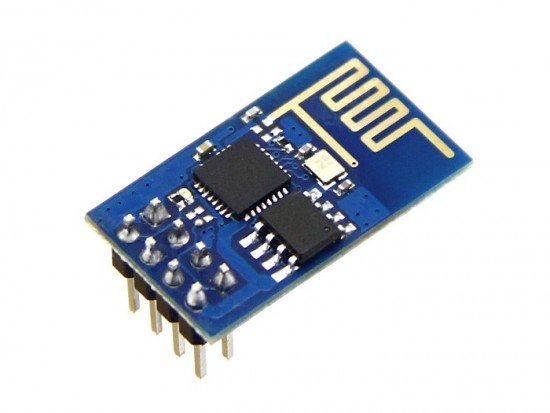 I bought a 4 position manual antenna switch and very quickly realized (again) that I did not want to go up and down the stairs with kids and wife sleeping to switch the antenna. And more importantly, I did not want to run another set of cables to drive a wired remote controlled one. Wireless was the solution. I checked the prices, and they were outside of my budget for a switch. So, what’s next? I came up with an idea. Get a RaspberryPi and add a relay board and then I have my WIFI wireless relay control. Add some UHF female SO-239s and we have a WIFI Antenna Switch. Well, two problems with this, first it is really clunky connecting all those coaxial cables to the relays and there would be a lot of signal loss (and good luck tuning that), its bulky and pretty difficult to assemble in one unit and that would not work properly; second, it was more expensive than I expected,  even DIY it was around 100  dollars. I built it anyway and, well it worked for a while. But I was not happy so I looked around and came up with a better idea (or so I thought!). I found the ESP8266, a WIFI module which is  small, cheap, I mean 3-dollars-cheap and fully programmable. Combining this module with a standard relay switch design, I thought I had a solution for way under 100.00 dollars integrated all in one single PCB board, suitable for mounting on a proper box.  Lets look at the design. 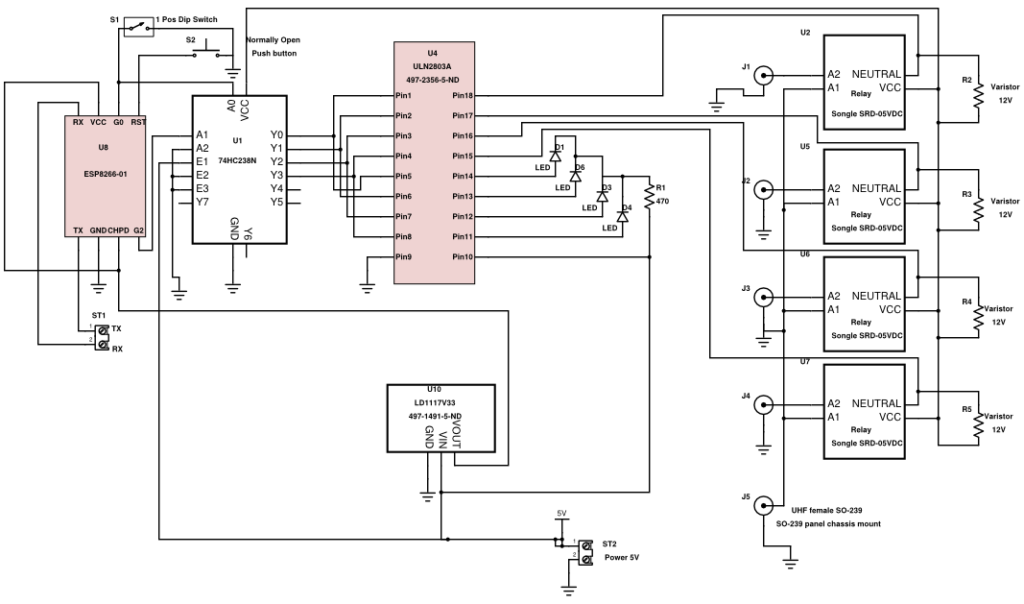 The brain of the switch

The ESP8266 is a very small WIFI enabled microcontroller. It can be programmed in C by flashing it with the manufacturer’s (Espressif) software development kit (SDK). But it can also be programmed in LUA using the NodeMCU SDK (open source, just Google it or go to GitHub). LUA is a scripting language used widely in the gaming industry and I picked it to program the ESP8266 because of being compact, very high level and allowed rapid prototyping.

The ESP8266 acts as an access point and/or a WIFI station,  so once it is configured it acquires an IP address and then you can communicate with it via a web browser or a TCP connection (phone, tablet, computer, etc).

The ESP8266-01 used in this project, has 2 GPIOs, GPIO0 and GPIO2, meaning that we can program the module so it can read and write stuff on these GPIOs. The ‘stuff’ is simply digital signals, a 0 or a 1,  or in volts, a few millivolts or 3.3 volts. This is perfect to drive LEDs or relays and make them open or close according to some logic and control either running on the module or instructed via a web or TCP server.

The module features a serial interface so you can communicate with it to program it.

There is plenty of material out there to get anyone going with this little wonder. The key things to know is that you will need a USB to serial module to initially talk to the ESP8266, be familiar with serial communication and able to do some script programming. For USB to serial, any FTDI232 based module will pretty much work, but be careful as they are counterfeit FTDI232 that can render useless, make sure whatever you get is genuine. Then you need to choose a serial terminal to send commands to the serial module that will send commands to the ESP8266. Something like CoolTerm or SSCOM32 would do the job. I use CoolTerm mostly on the Mac. Also, when you start copying LUA code into the module, CoolTerm does a great job.

With this brief introduction to the ESP8266, you can have a lot of fun prototyping all kinds of interesting WIFI projects.

I looked a several relay types, and for this first version of the switch, I estimated going with something on the lower power side would be a wise choice, something that could handle 100-300 Watts. There is plenty of time to improve the design and make it robust for high power transmitters. I started with a 4 position switch, so I needed to drive 4 low power, low current relays. The ESP8266 has 2 GPIOs (general purpose IO), GPIO0 and GPIO2,  but just 2 GPIOs, were not going to be able to drive 4 relays, I needed some logic. I decided to go with the 74HC238, a 3-to-8 line decoder. I just needed a 2-to-4 line decoder but since I had a bunch of these, lets use them, and connect the unused input line to ground. The ESP8266 GPIOs were going to feed the 74HC238 and provide the logic to switch the outputs, then these outputs will drive a Darlington power driver like the ULN2803. To make it safer, I decided to split the 8 ULN2803 outputs into 2 groups of 4, one group feeding the relays, the other the LEDs.

Figure 1 shows the desired truth table for the GPIOs and the Relays. Now to achieve this logic, I connected GPIO0 to input A0 of the 74HC238 and GPIO2 to input A1. As mentioned above, A2 is connected to ground. This arrangement provides me with the correct output logic from the 74HC238 which I can now connect to the ULN2803. The cool thing here is that at all times, only one output is active, which is what we want when switching antennas. We don’t want 2 antennas connected to the transceiver at the same time! Or do we?

To make convenient I added a reset push button switch and a flash switch, in case I needed to reset the board for whatever reason, or flash it if I had new firmware.

4 LEDs indicate which antenna is active and 4 relays do the switching as instructed by the ESP8266 and the logic circuitry. The input and output connectors are standard panel mount UHF female SO-239.

For safety, I included varistors at the feed point of the relays.

Putting it all together

I programmed the ESP8266 so it can be configured via a web browser to connect to the WIFI router. Once configured, the module acquires an IP address and then I can communicate via TCP protocol. The module responds to the simple commands 1, 2, 3, 4 to switch between the antennas. TCP commands can be sent from a laptop or computer using a simple utility written in Python, for example. If using a mobile device, there are apps that send and receive TCP commands. But better yet, I went ahead and wrote an iPhone app that specifically pairs nicely with the antenna switch. Figure 2 shows a screen dump of the app (which should be available for free on the Apple app store under AntennaSwitch). 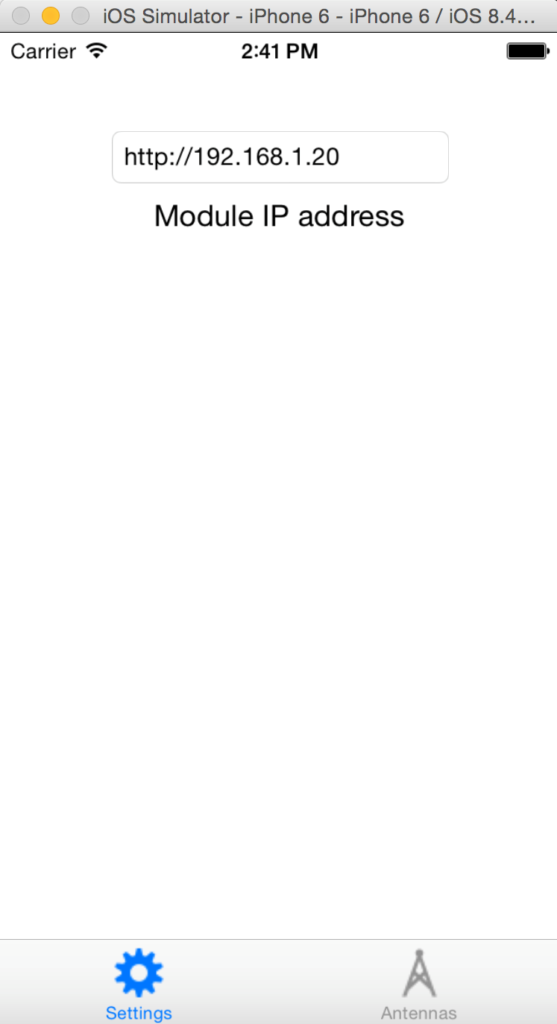 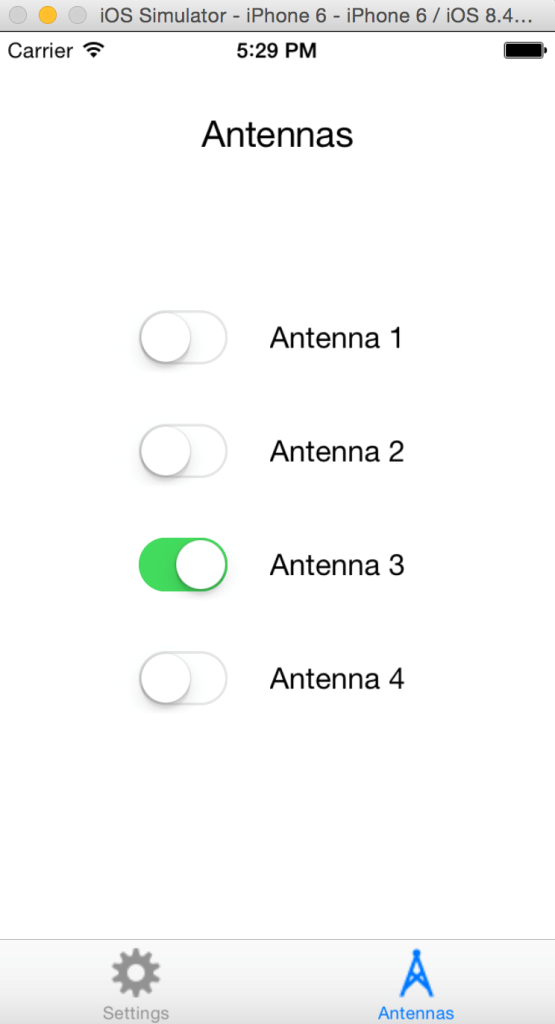 Figures 3a and 3b show the final PCB board and components. The finished board can be easily mounted in a metal box for safety and convenience. It only requires a 5 VDC small supply (250 ma). Figure 4 shows the schematic of the switch. 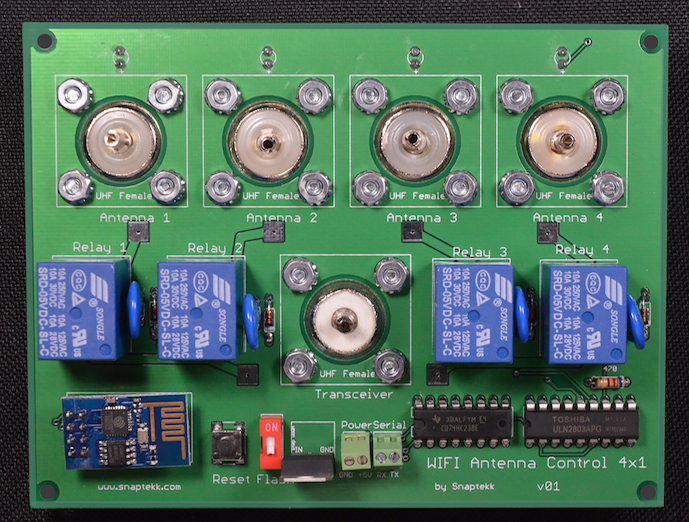 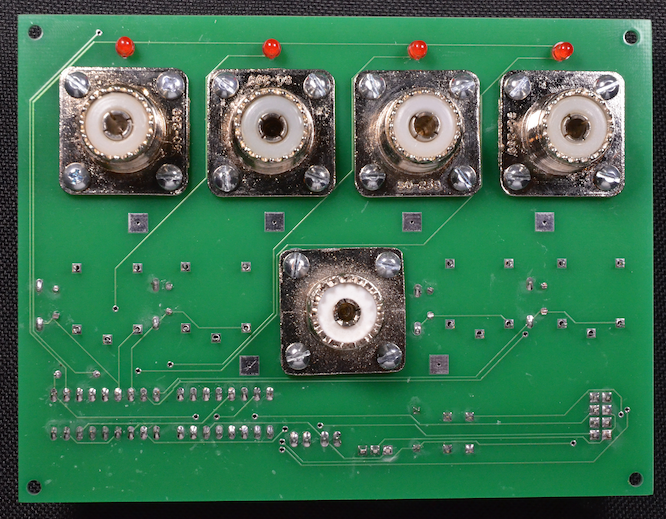 I was impressed of the performance and flexibility that the ESP8266 brings. Its small and extremely powerful and if you are interested in the Internet of Things (IoT), this module will allow you to hit the ground running. Being so small and modular it allowed me to integrate the UHF connectors, the relays, the logic circuits and the WIFI module all in one board that is 3 ¼ by 5 inches and can be easily mounted on any box.

Finished kits of the Antenna Switch are available, email me for details.

how to hack wifi from wifi router to mobile

What exactly are you trying to accomplish?

awsome, i am working on a project of my own and need to get away from RF control. Hope this can work controlling two dc motors. need to work out the controller board, will also control from pc. can you please advice i would love your help.

What is this project’s application usage?

For a ham radio operator it is important to have more than one antenna connected to their transceiver. Only one antenna can be connected at a time, hence a switch is required. The antennas might be far from the transceiver so you have tO run multIple long cables, with this switch you run just one cable and switch as needed as long as you have wifi converage.

Aside from that application which this device has addressed perfectly. This switching system is also useful for unlimited applications. This is such a great post.

Thanks for your input. You are welcome.

I have been a ham since 1983 and wanted a switch like this ever since but being a ham is already expensive. You have been very good at sourcing all the information and hardware. I would love to have one of these but need the programming explained or already written for me.

Is it possible to get a sketch adapted for android.