One of the downsides of using an Arduino board in projects is the fact that it comes with some other components which may not be needed after the code has been uploaded to the board. These peripherals consume a considerable amount of power which affects the overall power consumed by the project, thus increasing the rate at which the energy stored in batteries used for powering such project. This makes the Arduino boards not suitable for projects which are required to run on battery for long period of time like a weather monitoring station as there will be a need for constant battery change due to the high consumption rate of the device. One way to solve this problem while still retaining the “ease of use” that accompanies the Arduino platform is to use the ATMEGA328p microcontroller used on the Arduino Uno itself.  By using this chip, we eliminate the power loss of other components that make up an Arduino board and thus the battery will last for longer time.

The Atmega328p chip can be programmed in two main ways, assuming it has Arduino bootloader burned on the mcu.

The first way of programming the chip is the easiest as all we need to do is insert the chip into the Arduino Uno, upload the code and move it from the Arduino to our project when ready. The second option is used when there is no Arduino board. A USB to Serial adapter (an example is shown below) is connected directly to the microcontroller to program it via the Arduino IDE.

The following components are needed to build this project;

As usual, all the components listed above can be purchased via the link attached to them.

After connecting the components on the breadboard, the setup should look like the image below.

In hardware design and development, power management is done both from the hardware end by choosing low power components and from the software end by powering down internal microcontroller peripherals when they are not needed and other things like adjusting the voltage and frequency to ensure they meet the standard requirements. To reduce power consumption from the software (firmware) side of the device, we will use the Arduino low-power.h library. This library allows us to shut down internal peripherals of the microcontroller using time or via the use of interrupts.

Asides the low-power.h library, the Nokia 5110 LCD library, and library for the BMP180, BH1750 and DHT 22 will be used to easily interface the sensors with the Arduino.

To briefly explain the code for this project, we start by including all the libraries that will be needed as mentioned above.

Next, we specify the Arduino equivalent of the pins of the atmega328p to which the DHT sensor is connected as arguments after which we create an instance of the DHT library specifying that we are using the DHT22.

Up next is the void setup function under which we initialize the LCD, the light intensity sensor, and the pressure sensor.

The void loop() function is quite simple. we start by reading the light intensity, if the light intensity is above 30 lumens indicating daytime, we take the readings from other sensors and display them on the LCD.  Using the low power library the function sleepfortwominutes() was created. This function shuts down all the hardware peripherals after a reading has been obtained preserving the battery life of the system setup.

The complete code for the project is available for download under the section towards the end of this page.

Insert the Atmega328P microcontroller into an Arduino and upload the code. After uploading the code, remove the microcontroller and insert it correctly into the circuit on the breadboard.

While we can not wait for a year to confirm that this project will have a battery life longer than 1 year, we can measure the system’s current consumption and use that data to estimate how long a battery will last.

In sleep mode with the screen off, the current draw of the system was o.19mA 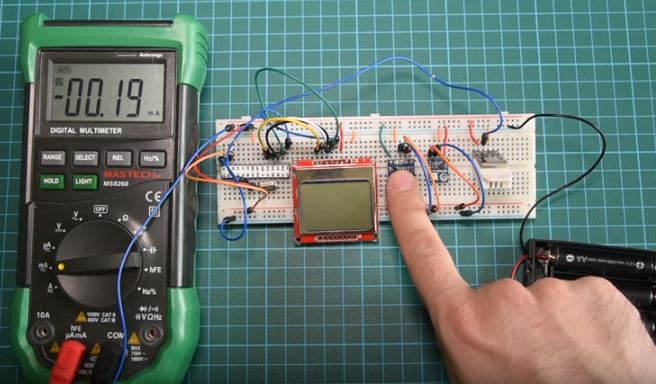 With the LCD on and the microcontroller in sleep mode, the current draw was 0.41 mA. 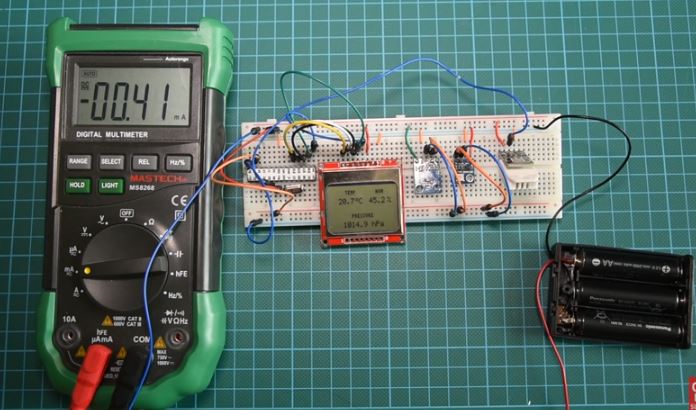 When the system is fully powered, with the microcontroller reading data from sensors, the current draw is 8.22mA 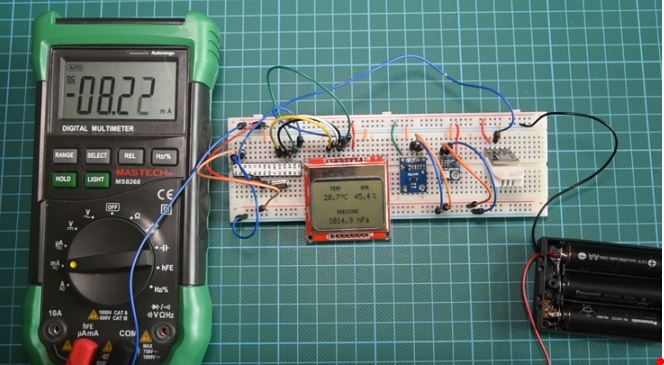 Using the excel sheet attached alongside the code and schematics under the download section, we can see that the system would last for a year running on batteries due to the amount of energy we save by occasionally putting the microcontroller to sleep.

That’s it for this tutorial guys, thanks for taking time to read through. Feel free to drop whatever questions you might have regarding this project under the comment section. I will do my best to provide answers.

The video tutorial for this project is located here.