The MegaTinyCore is an Arduino core for programming the new series of Microchip microcontrollers with the Arduino IDE. The Core is based on the work done by the Arduino team during the development of support for their new ATmega4809-based boards.  While the core provided everything we needed to compile code for the new microchip series boards, there was still a slight problem as the ATtiny 0- and 1-series can only be programmed through a Unified Program and Debug Interface (UPDI) (a 1-wire interface using the reset pin on the ATtiny) because they do not have a bootloader, and as such cannot be programmed via ISP or with ISP programmers. To solve this problem, GitHub user ElTangas wrote a UPDI programmer which can be uploaded to an Arduino Uno or equivalent board to turn the board into a UPDI programmer for the new series board, giving users the ability to not only develop their code with the Arduino IDE, but also upload the code to their target microcontroller using the Arduino board as the programmer, totally eliminating the need for Atmel studio in the development process.

Based on the above, this tutorial will show how you how to set up an Arduino board as the UPDI Programmer and the process of setting up the megaTinyCore on your Arduino IDE.

The following components will be needed to follow this tutorial:

None of the new ATtiny devices are available in DIP packages, as such, to connect them on a breadboard, you will need a sort of breakout board which is why the Adafruit 8-pin SOIC is being used for. For microcontrollers with more pins, you can check out their 14 and 20 pin SOIC or these 24-pin VQFN board on Amazon. All of these components can be bought from the majority of online electronics component stores.

With all the components in place, we can start by Installing the megaTinyCore on the Arduino IDE.

The megaTinyCore requires Arduino IDE version 1.6.3 or later although it was stated on its GitHub page that it may require a much more recent version of the IDE but the initial test was done with version 1.8.9.

The megaTinyCore can be installed on the Arduino IDE in two ways;

I will explore both methods and let you decide which is easiest or faster.

1. Installation via the Arduino Board Manager

The Arduino board manager was designed to make the installation of new boards and add-ons easy for users. To install the megaTinyCore using this method, follow the steps enumerated below;

With all of that done successfully, you should now see the Attiny boards all listed under the boards’ section (tools -> Boards) of the Arduino IDE. If that is so, it means the board installation was successful.

Manual installation is recommended if you are interested in contributing to the development of the core, or if having the latest fixes which are not in the released version is important to your build.

For automatic updates, instead of downloading the zip file, you can download the GitHub client, and sync this repo to the hardware subfolder of your sketchbook folder.

With the installation steps completed, you should now see the Attiny boards all listed under the boards’ section (tools -> Boards) of the Arduino IDE if the installation process was successful.

With that done, the next step is to set up a UPDI programmer after which you will be ready to upload code to any of the new attiny series Microchip microcontrollers.

As mentioned during the introduction we will need to make a UPDI programmer to be able to upload code to the attiny series using the IDE and an Arduino board.

There are two steps to doing this. The first step involves transforming an Arduino board to serve as the UPDI programmer while the second part shows how to connect the Attiny to the programmer and the Upload process.

1. Transform an Arduino to a UPDI programmer

To transform our  Arduino board to a UPDI programmer, we will use the UPDI Arduino sketch created by ElTangas. The sketch converts ATmega328(p)-based Arduino’s, like the Arduino UNO, Nano, and Pro mini, into a UPDI programmer. The sketch, however, does not work on boards based on other microcontrollers, like the 32u4 (on Arduino Micro/Leo) or any non-AVR board.

The following steps show how to make this cheap UPDI programmer;

With upload successful, you are now ready to use the UPDI programmer. If you use the new ATtiny series a lot, it will be a smart move to totally dedicate an Arduino pro mini or nano board as a permanent UPDI programmer.

2. Connecting the Attiny and uploading

Connect the ATiny to the Arduino as shown in the schematics below;

The connection is quite straightforward but pin-pin connection between the Arduino and the Attiny is illustrated below to prevent mistakes;

It is important to note that the UPDI pin of the ATiny is Connected to the Arduino via a 4.7k resistor which may not be necessary if using some of the breakout boards, as some of them come with the resistor built-in.

With the microcontroller connected to your Arduino UPDI programmer, we are now ready to upload code to the attiny.

Open or write the code you would like to upload. Verify the code to ensure that there is no error, then go to Tools -> Board, and scroll down till you see the ATtiny you are working with on the list and select it.

This should update the parameters being displayed when you click tools. Now we need to tell the Arduino IDE to use our programmer. To do this, go to Tools->Programmers (towards the end).

Scroll down on the pane and select jtag2updi (megaTinycore) as your programmer. 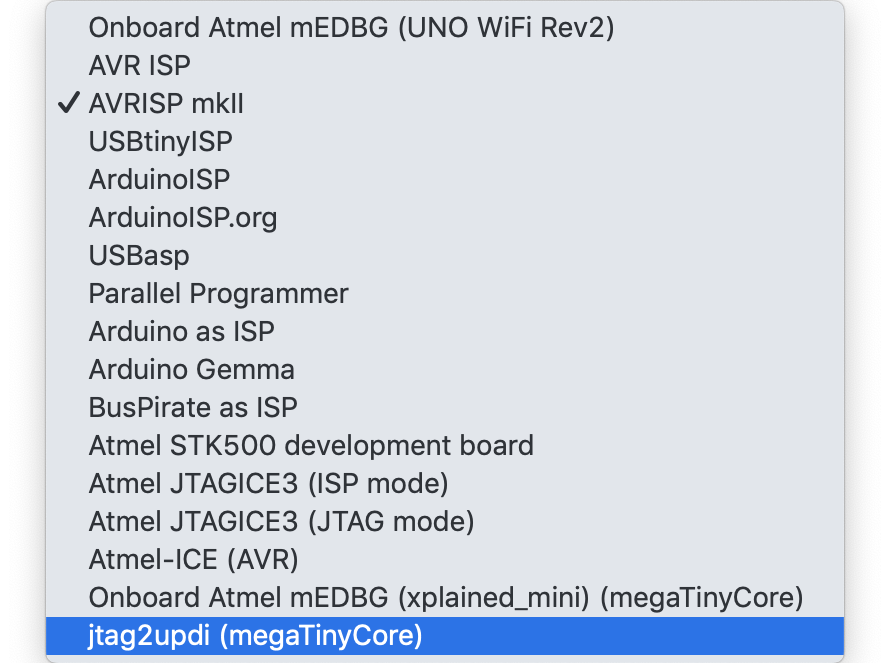 With that done, your screen should now look like the image below when you click on tools; 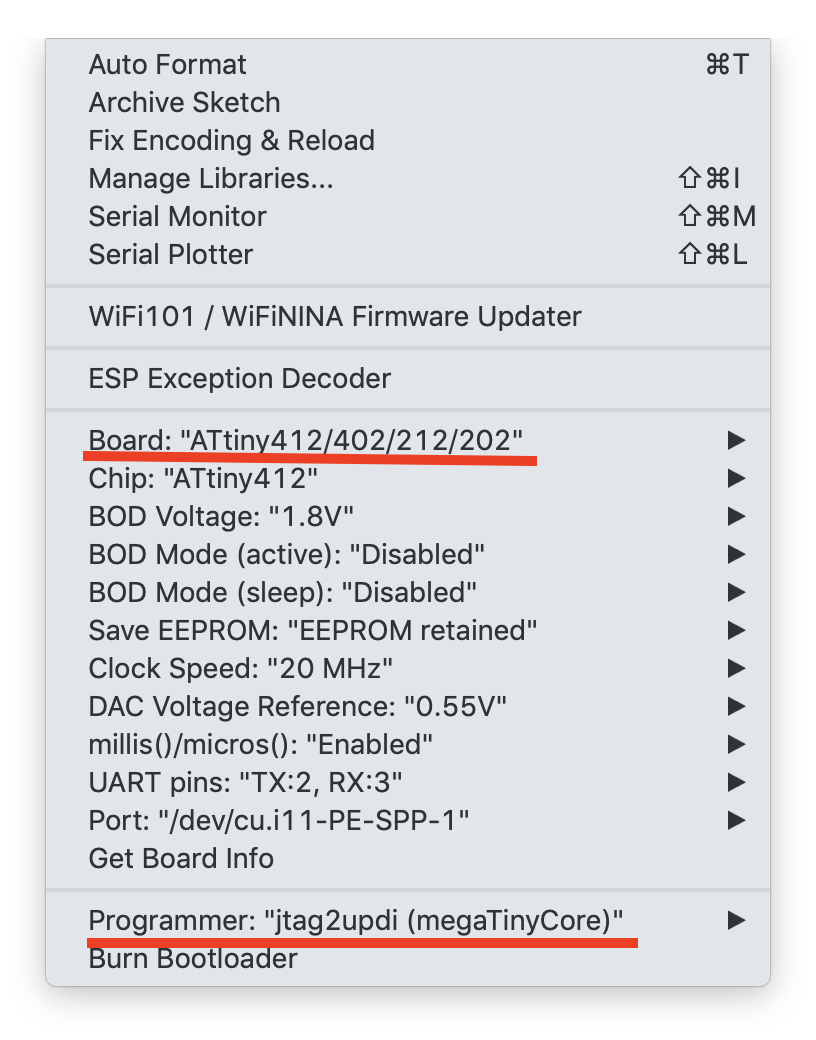 This means all lights are green. Now select the port to which the Arduino nano is connected and hit the upload button on the IDE. You should immediately see the upload process and when complete, the microcontroller should perform as programmed.

Compared to the former ATtiny microcontrollers, these new series of MCUs come with higher amount of flash memories, cost a whole lot less and are all-round more efficient compared to the previous set as such they should probably be considered when next you are making the choice of a tiny low-cost, low-power microcontroller for your project.

Sorry, not sure i get your question/comment

Hi there,
Thanks for the good article. Is it possible to upload a HEX file already compiled by ATMEL STUDIO by this method. If yes how to ?
regards
Sajeev

Dear friend, perfect tutorial very helpful.
I programmed an Attiny406 microcontroller successfully, however, I have a problem with pwm outputs.
For example I am uploading the following code which it is working perfect on Nano but not on the microcontroller Attiny406. Same issue on MH-Tiny board.

// map it to the range of the analog out:

Try declaring the variables as float,