The usage of Binary Coded Decimals to represent decimal numbers has many advantages in digital systems and, amongst these, the main advantage is the ease of conversion from and to decimals. However, there is a wastage of six (6) numbers from “A” to “F” as discussed above. In Binary Coded Decimal, each decimal digit is represented by a four (4) bit binary number (BCD), and each decimal digit can be represented by a weighted sum of binary values. It is known from previous articles, that the weight of a decimal digit, from right to left, increases by 10 times, whereas, of a binary digit (bit) by 2 times. In four-bit BCD, the first, second, third, and fourth digit has a weight of 20 = 1, 21 = 2, 22 = 4, and 23 = 8, respectively. In the following table, the binary power or weight of each BCD bit is shown. 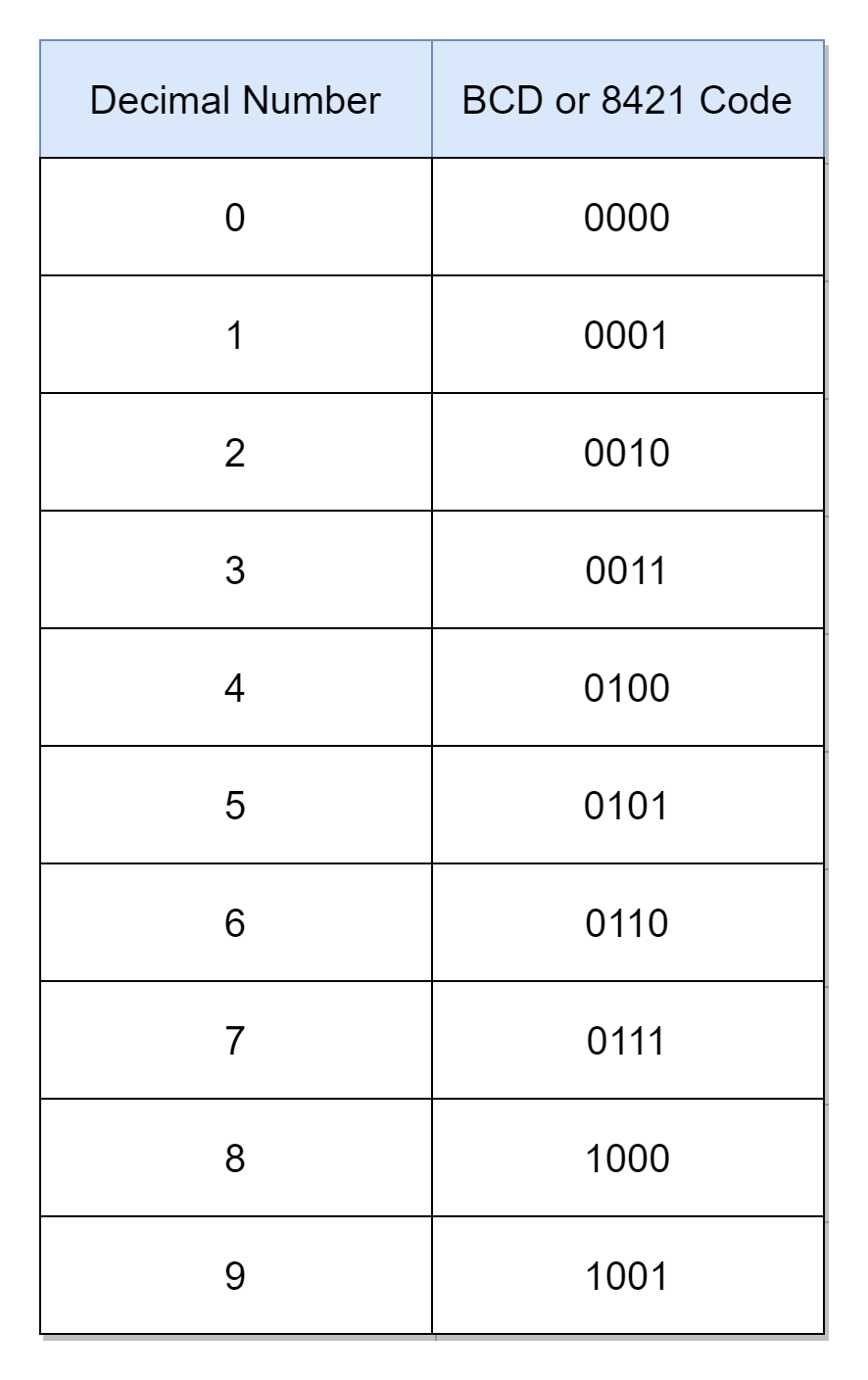 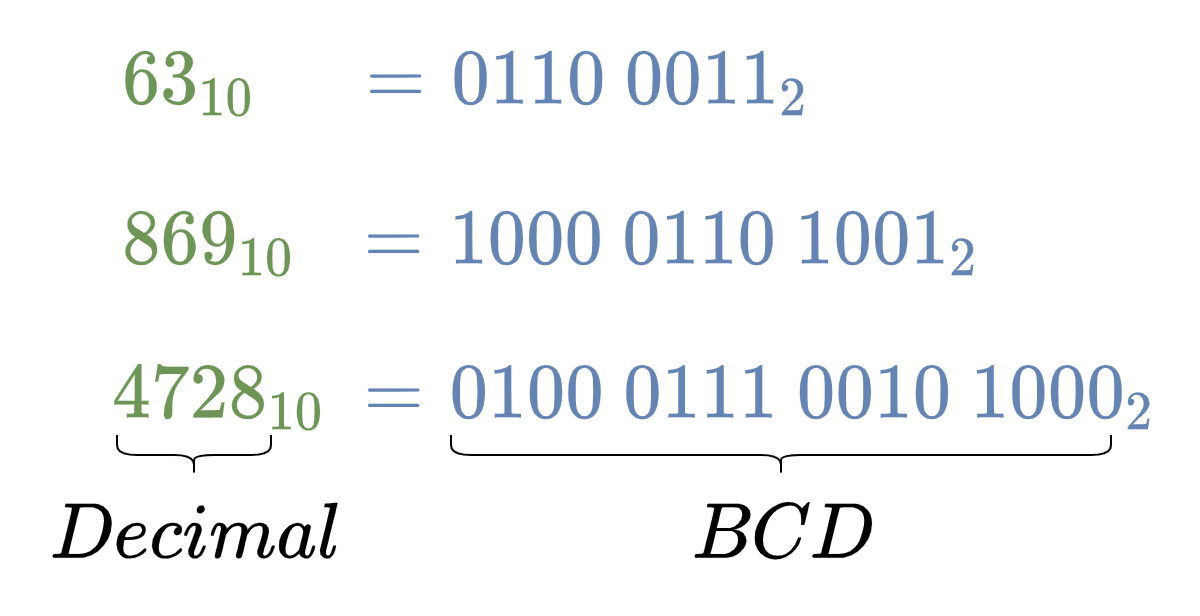 As each decimal digit is represented by a 4-bit BCD and, therefore, it is necessary to split the given binary number into groups of 4-bits. The 4-bit groups are formed from the least significant side (rightmost) to the most significant side (leftmost). Eventually, leading to the formation of the last 4-bit group which may require additional significant zero(s) to complete the 4-bit group. Each 4-bit group represents the respective BCD or 8421 code of that decimal digit. Using the above BCD truth table, equivalent decimal digits against respective BCD/ 8421 codes are obtained. The combination of decimal digits ultimately gives the representation of the desired decimal number. In the following examples, the BCD to decimal conversion is carried out to explain the conversion process. 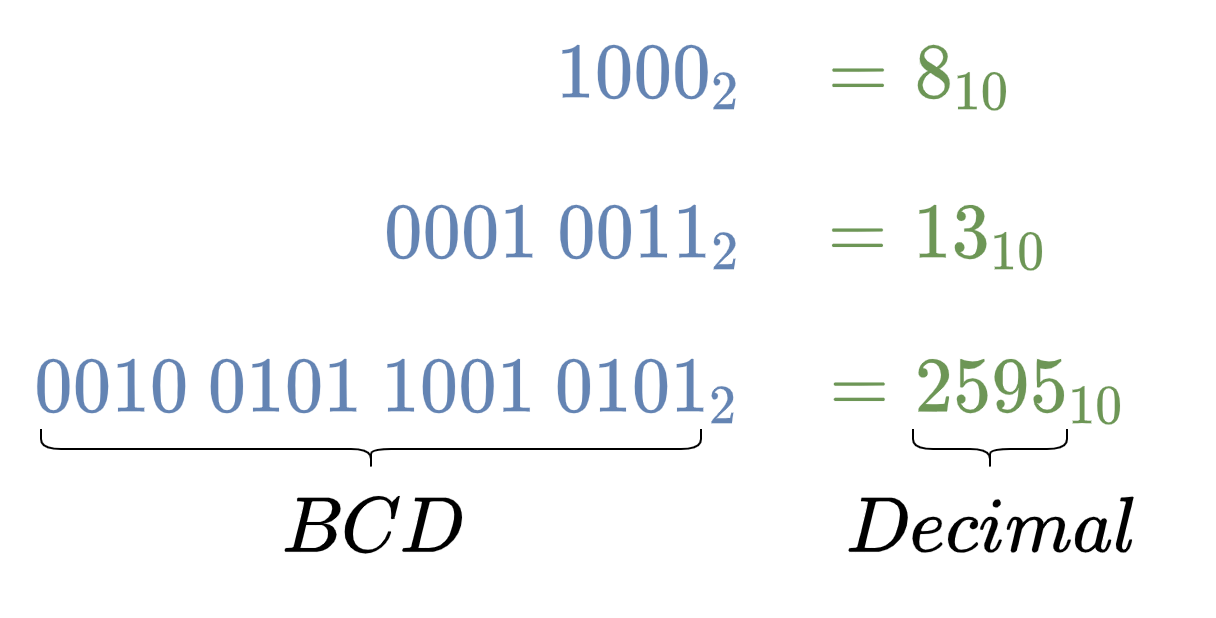 The Binary Coded Decimal is a mere representation of a single decimal digit and a decimal number represented by BCD encoding is not the actual binary equivalent of that decimal number. For example, the BCD equivalent of 6310 is 011000112, whereas, the pure binary equivalent of 6310 is 001111112. The BCD representation of decimals is useful for displaying decimal values etc. but is not an efficient way of storing data and for performing arithmetic operations. The storage using BCD encoding would require an additional bit(s) compared to its equivalent true binary number. It is because of discarding six (6) binary numbers out of sixteen (16) as described above. For example, the representation of a three-digit decimal number requires 12-bits in BCD and, contrary to this, a 10-bit binary number can accommodate a decimal number up to “1024”. Moreover, BCD encoded binary numbers are not suitable for arithmetic operations. Consider a simple example of the addition of two BCD binary numbers which generates a carry bit, the addition of this carry bit to a BCD number of “1001” or “9” would lead to an invalid BCD code of “1010”. The solution requires conversion from binary to decimal i.e. 1010 and then reverting to BCD equivalent i.e. “0001 0000”. However, it is more suitable and convenient to convert BCD encoded numbers to pure binary numbers before performing any arithmetic operations.