The rectification process is explained for each half-cycle.

During the first half-cycle, the potential developed forward biases D1 diode and reverse biases diode D2. The positive half-cycle passes through the D1 diode and develops the voltage across the load resistor as shown in figure-2. The current direction through the load resistor and the voltage polarity across it, are to be observed and should remain the same during the negative half-cycle.

During the second half-cycle, the voltage polarity across secondary winding is shown in figure-3 which is due to reversal of polarity across the primary winding. Under this polarity, the D2 diode is forward biased and the D1 diode is reverse biased. Hence, the D2 diode allows the current to flow through the load resistor whilst the D1 diode remains off during this half-cycle. The current direction through load resistor and voltage polarity across it remains the same as observed during the first half-cycle. This arrangement of diodes with a center-tap transformer leads to a uni-directional current flow through the diode. The rectification of alternating current takes place during both half-cycles i.e. for the whole time period of a sinusoidal signal.

The rectification process continues, similarly, by alternating the current flow through diodes D1 and D2 for the approaching cycles.

The average of the full-rectified sinusoidal wave is given by:

The transformers having a center-tap secondary winding are more costly and larger in size due to the presence of two windings on the secondary side. Because of this, in power supplies, mostly signal winding transformers are used and a special diode bridging is used to perform full-wave rectification. The diode bridge can be made using four similar diodes or a complete off-the-shelf diode bridge package can be obtained to perform full-wave rectification. The diode bridges are available in different ratings and specifications to fit into different applications and circuit designs.

A simple diode bridge full-wave rectifier is shown in figure-5 and four power diodes are used here instead of two diodes in the center-tap transformer. During the first half-cycle, the voltage polarity across the diode bridge is shown in figure-6 which makes the diodes D1 and D2 forward biased. The other half of the bridge i.e. diodes D3 and D4 remain in off condition. This biasing arrangement of the bridge causes the flow of current through the load and a voltage appears across it. The direction of current and voltage polarity across the load is depicted in figure-6.

The diode bridge circuit performs full-rectification of successive alternating cycles. The drawback of the bridge rectifier compared to the center-tap transformer is that it uses two diodes at a time for rectification which causes double forward voltage drops.

The power supply circuit of the previous article using a half-wave rectifier is used here to compare the results. The voltage source of 220VRMS with 100:1 transformer was used to supply a load of 1 kΩ Using bridge full-wave rectifier:

An approximate 20 VDC appears across (forward diode voltage drops are ignored to keep things simple) the load and the current flow through 1 kΩ load is:

The power delivered to the load using a full-wave bridge rectifier:

However, an increase in efficiency comes at the cost of ripples which are doubled compared to the half-wave rectifiers. The increase in ripples is due to an increase in frequency which has doubled. The ripples are undesirable elements of any electronic circuit and the output of power supplies can be smoothed using a filtering capacitor. The peak rectifier circuit with capacitor filter is shown in figure-8.

The ripple voltage for a full-wave rectifier is given by the following formula and note that ripple frequency has doubled as compared to half-wave rectifier:

For example, if the desired ripple voltage is 1V for the above example then the value of the capacitor filter is: 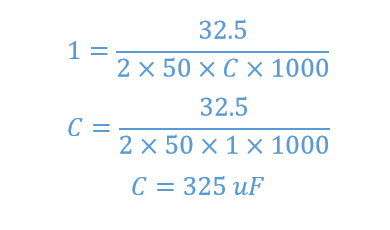 So, a capacitor of 325uF is required to have a ripple voltage of 1 V for a bridge rectifier power supply given in the above example.

The diode conduction period can be approximated by the following formula: 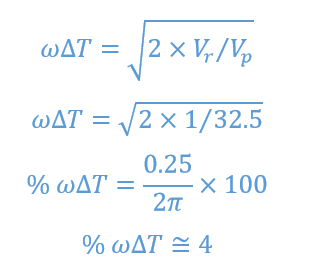 The diodes will conduct during only 4% of the total period and the rest of the period load will be supplied by the capacitor.

The full-wave rectifiers using bridge diodes are mostly used in power supplies and rectifiers. The drawbacks are the use of two diodes and an increase in ripples. Both of these factors could lead to distortions and harmonics in circuits.