In the following figure, a physical structure of the PN junction is shown. Both P-type and N-type semiconductors are in contact with each other. Actually, both regions are made of the same silicon crystal structure/ part and this, silicon crystal, is further doped to form P-type and N-type regions.  These regions are further connected to external wires through aluminum contacts. The terminals are named “anode” and “cathode” as per diode naming terminology.

Some of the majority electrons diffusing across the PN junction to P-type region, recombine with some of the majority holes. Due to this recombination process, some of the holes disappear in the P-type region and uncover the negative bound charges of impurity. This disappearance of holes in P-type, near the PN junction, causes depletion of positive charges, and as such negative charge appears.

So, there is a carrier-depletion region on each side of the PN junction, the P-type will be negatively charged and the N-type will be positively charged. The formation of charges causes an electric field (E) across the depletion and a voltage appears to have N-type as positive voltage relative to P-type having negative voltage. This electric field, actually, opposes the diffusion of majority carriers into other regions and the voltage developed, due to this field, acts as a barrier. The voltage barrier has to be overcome to diffuse majority carriers into other regions. The larger the barrier voltage, the smaller the number of carriers that will be able to diffuse to constitute the diffusion current. Thus, the magnitude of diffusion current (ID) depends on the barrier voltage.

The Drift Current (IS)

When this PN junction is not connected to an external voltage then under this open-circuit condition:

Under the open-terminal condition, the voltage across the depletion layer or the barrier voltage will be: 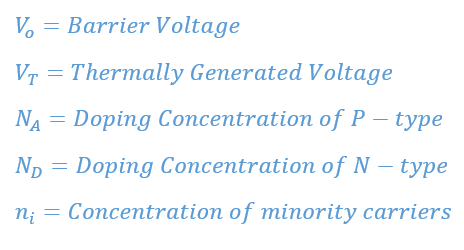 The above equation shows that the barrier voltage is dependent on the doping concentrations as well as on the temperature. It is worth mentioning here that for silicon, the PN-junction voltage barrier is between 0.6 V to 0.9 V, at room temperature.