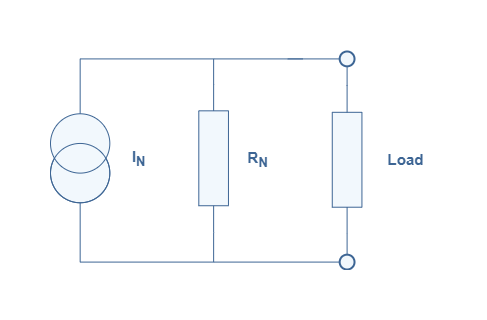 This tutorial is a continuity of our last article about Thevenin’s theorem. In the previous article, we have seen that any linear electrical circuit can be simplified into an elementary circuit that consists of an ideal voltage source in series with resistors.

Another very similar model is known as Norton’s theorem, it has been established in 1926 by the American engineer Edward Norton, more than 70 years after the first version of Thevenin’s theorem.

Norton’s theorem affirms that any linear electrical circuit is equivalent to an ideal current source in parallel with an equivalent resistor.

First of all, we give a recap concerning the bold terms of this sentence in order to understand the appropriate framework where this theorem applies. In the second section, we propose a step by step method to follow in order to determine Norton’s equivalent model of a circuit. Different real examples will be proposed in a third section in order to illustrate this method.

Finally, we will draw a link between Norton’s and Thevenin’s models, before concluding this tutorial.

Linear electrical circuits (LEC) are the framework of Norton’s theorem and they represented a particular type of circuit in which the only components are ideal sources and resistors.

An equivalent resistor Req represents an association of a set of interconnected resistors. The rules to associate resistors together are illustrated in Figure 2 below:

The framework and definition being now clear, we illustrate Norton’s theorem with the following Figure 3:

Using Norton’s theorem on a LEC leads to a simple circuit known as Norton’s model composed of an ideal current source in parallel with resistors. The equivalent current source and resistor are labeled with the subscript N as a reference to the name of the theorem.

The next section abstractly presents the step-by-step method to follow in order to determine the Norton model of any LEC.

Norton’s current IN represents the current at the terminals of the LEC when the load is replaced by a wire, it is also known as the short-circuit current.

Norton’s resistance RN is, in fact, equal to the Thevenin resistance RTh, they both represent the resistance at the terminals of the LEC when all the LEC’s sources are deactivated: the voltage sources are shortened and the current sources opened.

We propose the following steps to respect in order to determine the Norton model of any LEC:

The next section focuses on applying this method to real circuits, from the most elementary design to more complex architectures.

Norton’s model of some LEC

In order to determine the Norton model of this circuit, we remove the load Z and shorten the terminals of the circuit: 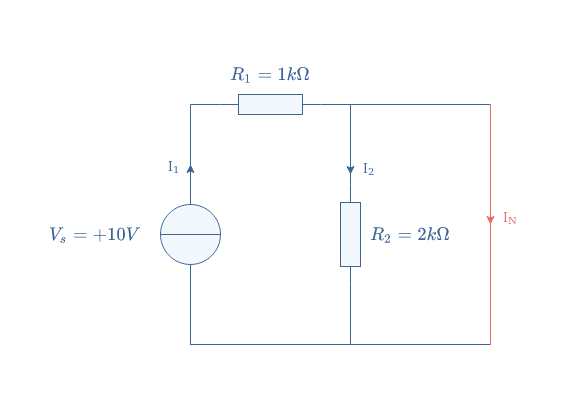 We can now determine the Norton current IN, Kirchoff’s current law states that I1=I2+IN. Since IN does not cross any impedances, which means that the resistor R2 is shortened, we can affirm that I2=0.

Norton’s current is therefore equal to the current delivered by the voltage source, it can be computed by applying Kirchoff’s voltage law: Vs=R1I1+R2I2=R1I1 ⇒ IN=Vs/R1=10 mA.

To find Norton’s resistance RN, we replace the voltage source by a wire: 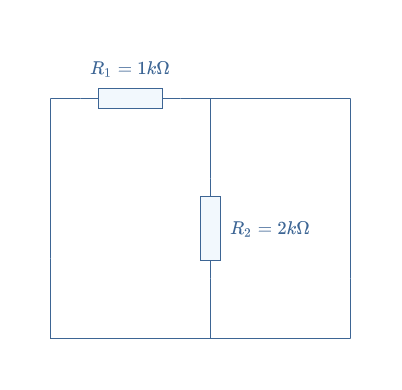 We can now give the Norton model of the circuit presented in Figure 4:

We consider a similar example than in the previous subsection by replacing the voltage source by a current source:

We replace the ideal current source by an open circuit in order to find Norton’s resistance: 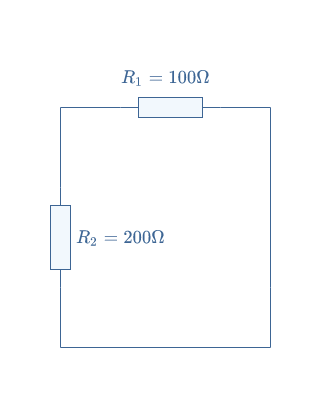 The equivalent resistance is simply given by the series associations RN=R1+R2=300 Ω.

The Norton model of the LEC presented in Figure 6 is finally given by the following circuit:

For the last example, we increase the complexity by including both current and voltage sources and more resistors in the same circuit. We consider the following LEC that we have already dealt with in our previous article concerning Thevenin’s Model:

After rearranging these equations to express IN as a function of i1, i2, and i3 in each line, we can finally isolate Norton’s current and find: IN=(V1-V2)/4R+(I/4).

We have already demonstrated in the Thevenin theorem article that RTh=4R/3 and since RN=RTh, the Norton resistance is thus already known.

Norton’s model of this complex circuit is given in Figure 9 below:

The link between Thevenin and Norton models

There is something very interesting to note about the multi-source example treated both in this article and the Thevenin tutorial. Indeed, if we proceed to the multiplication U=IN×RN, we find U=(RI+V1-V2)/3, it happens that this value is equal to the Thevenin equivalent voltage: IN×RN=VTh.

The conversion between a Thevenin model to a Norton model or reciprocally lies only on one operation, we illustrate this conversion in Figure 10:

This tutorial has been built around one sentence, known as Norton’s theorem: “Any linear electrical circuit is equivalent to an ideal current source in parallel with an equivalent resistor“.

We have first presented the framework in which this theorem can be applied along with the definitions of some key concepts. We have seen that linear electrical circuits (LEC) consist of an interconnection of ideal sources and resistors. Ideal sources are well defined in the first section along with the equivalent resistance concept.

The second part is a short section that proposes a step-by-step method to follow in order to determine the Norton model of any LEC. The method is illustrated with real examples in a third section which proposes simple single-source circuits and finally a more complex architecture.

To conclude, we establish a link between Norton’s and Thevenin’s equivalent circuits by illustrating how to convert one model to another.