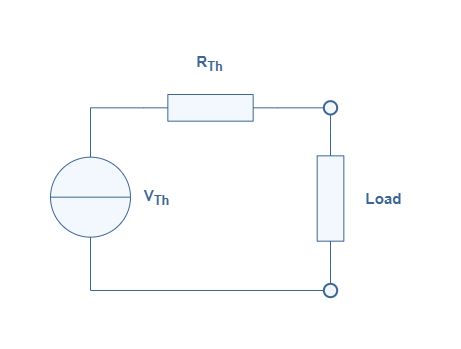 In this tutorial, we present a powerful method that can simplify through some transformation steps, complex circuits into elementary circuits and this method is commonly known as Thevenin’s theorem.

Originally, it was the German physicist Hermann von Helmholtz who first demonstrated the theorem in 1853, but history kept the name of the French engineer Leon Thevenin, who in 1883, unawarely of the work of Helmholtz, proposed a more elegant method to prove the theorem.

Thevenin’s theorem affirms that any linear electrical circuit is equivalent to an ideal voltage source in series with an equivalent resistor.

We will illustrate this statement in the first section where we also define the bold terms of the theorem. In the second section, we present the method to follow in detail, in order to apply Thevenin’s theorem to a circuit.

Finally, some Thevenin transformations are fully depicted in the last section with real circuits taken as examples.

As previously mentioned, Thevenin’s theorem can only be applied to linear electrical circuits (LEC). The internal structure of LEC consist of interconnected ideal sources and resistors. Reactive components such as capacitors and inductors must be excluded since their voltage/current characteristics are not described by a linear formula.

An ideal voltage source consists of a generator that delivers a constant value of voltage regardless of the current flowing in the circuit. This means that the same ideal source will always deliver the same voltage Vs for any circuit connected at its terminals. This property ensures that the voltage/current characteristic of an ideal voltage source is constant and therefore is linear.

Ideal current sources can also be found in LEC and consist of generators that provide a constant value of current regardless of the voltage at their terminals. A representation of an ideal current source along with its and voltage/current characteristic is proposed in Figure 2 below:

Now that these various definitions have been detailed, we can illustrate Thevenin’s theorem with the following Figure 4:

The simpler circuit obtained from the Thevenin transformation is known as the Thevenin model. The equivalent source and resistance are labeled with the subscript Th as a reference to the name of the theorem.

In the next section, we give the abstract method in order to determine this model from any LEC.

The goal of this section is to present how the Thevenin parameters VTh and RTh are determined.

Thevenin’s voltage VTh is the voltage between the terminals of the LEC when the load is disconnected and it is also known as the open-circuit voltage.

Similarly, Thevenin’s resistance RTh is the resistance at the terminals of the circuit when the load is disconnected and all the circuit’s sources are disabled, the voltage sources are replaced with short-circuits and the current sources with open-circuits.

We propose therefore a series of steps to follow in order to determine the Thevenin model of any LEC:

In the following section, we illustrate this method by determining the Thevenin model of some LEC examples with increased architecture complexity.

Thevenin’s model of some LEC

For the first example, we consider a basic LEC composed of only one voltage source and two resistors in a parallel configuration:

In order to determine Thevenin’s model, first of all, we proceed to steps number 1 and 2 explained in the previous section. When disconnecting the load Z from the circuit, we compute the voltage at the terminals of the LEC, that is to say across the resistor R2, by applying the voltage divider method:

After replacing the parameters by their values, we obtain VTh=2.5 V.

We consider now the circuit by replacing the voltage source by a wire. The equivalent Thevenin resistance is the parallel association of the resistors R1 and R2:

The voltage and current across any load Z are now much easier and faster to compute. As an example, if Z=100 Ω, we can use again the voltage divider formula to find VZ=0.4 V. The current is obtained by applying Ohm’s law to the resistance Z: I=VZ/Z=4 mA.

For the second example, we consider a similar circuit than in Figure 5, but replacing the voltage source by an ideal current source and rearranging the resistors:

First of all, we disconnect the load Z from the circuit in order to determine VTh: 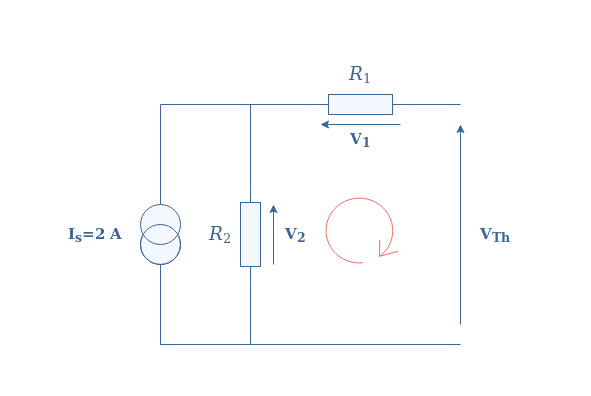 When applying Kirchoff’s Voltage Law in the loop highlighted with the red symbol, we find VTh=V2-V1. However, since the circuit is opened, no current is observed across R1 and therefore VTh=V2. The current flowing in R2 is thus equal to the current source, we finally apply Ohm’s law to R2 in order to find VTh=100×2=200 V.

Thevenin’s resistance RTh is found by replacing the current source by an open circuit, the equivalent resistor is determined by the series association of R1 and R2: RTh=R1+R2=150 Ω.

Figure 8 below illustrates the Thevenin model of the circuit presented in Figure 7:

For this last example, we propose a more complex circuit that includes both current and voltage sources:

We disconnect the load in order to determine the voltage VTh. It comes automatically that i4=0 since the circuit becomes open. Kirchoff’s current law affirms that I=i1+i2+i3, moreover, we can assert thanks to Kirchoff’s voltage law that:

We replace the current source by an open circuit and shorten the voltage sources in order to determine RTh: 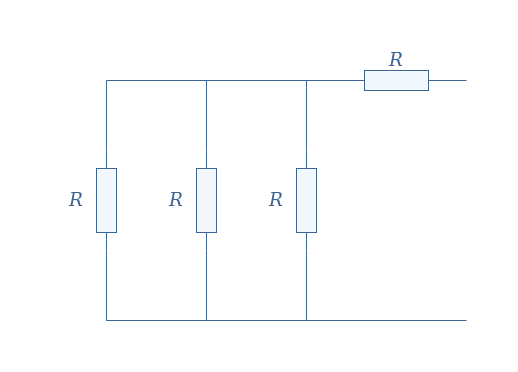 The equivalent resistance is given by the parallel association of 3 resistors in series with R, which leads to RTh=R+R/3=4R/3.

Thevenin’s model of Figure 9 is finally given by:

“Any linear electrical circuit is equivalent to an ideal voltage source in series with an equivalent resistor.” This sentence, known as Thevenin’s theorem, was the focus of this article.

In the first section, we define the bold terms which give the framework where the theorem can be applied. A linear electrical circuit (LEC) is an interconnection of ideal sources and resistors. Ideal sources are further defined as sources with a perfectly flat voltage/current characteristic. An equivalent resistor is simply a concept that allows us to regroup a set of interconnected resistors into a single component.

In a short second section, we abstractly present how to determine the Thevenin model of any LEC by following a series of steps.

The third section illustrates, with real examples, how to transform a LEC into its equivalent Thevenin’s model. First, we clarify how to proceed for circuits containing either voltage or current sources. Finally, we demonstrate how to perform the transformation with a more complex LEC containing both sources and more resistors.

It becomes especially clear with the last example that Thevenin’s model is a powerful tool to transform complex linear circuits into elementary circuits containing only one source and a resistor.