A digital logic circuit can be represented by Boolean Algebraic expression. It is a simple and effective way to describe digital circuit behavior and switching action. It is known that Boolean Algebra uses a set of rules and laws to reduce the logic gates or Boolean expression whilst keeping the particular logical operation unaltered. The digital logic circuits are constructed using logic gates such as AND, OR, and NOT gates, and these logic gates constitute a “Full Set”. This means that every other logical function can be constructed using the members of a “Full Set”.

The Product (AND) Term

In Boolean Algebra, product (multiplications) means resultant/ output of AND operation. The logical inputs are AND’ed together to yield a logical output. The product includes each possible instance of variables having a true or complementary form. These instances occur only once and are called “minterms”. A minterm is a product term in a Boolean function in which every element is present is either in normal or in complemented form. For example, F(A, B) function has possible minterms of AB, A’B, AB’, and A’B’.

These minterms can have two or more input variables or constants with two possible states of “0” and “1”. The following table gives possible input states with all possible combinations. 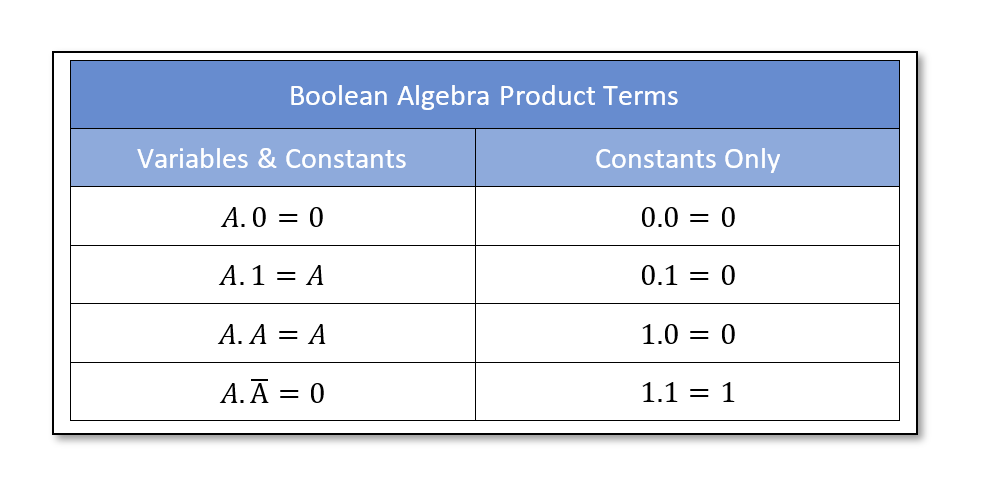 From the above table, the product of two variables can be simplified into a single constant using the following Boolean laws wherein “A” represents a variable input and “0” & “1” as constant inputs.

AND operation of a term with its complement is always equal to 0 i.e. A.A’ = 0

The AND operation is independent of the order of terms i.e. A.1 = 1.A

The AND operation of a term with itself is always equal to term i.e. A.A = A

The Sum (OR) Term

As described earlier in this article the AND function is termed as the product term because it produces the product. On the other hand, the OR function can be designated as a Sum term as it produces the sum of inputs/ variables. The OR function is similar to the sum operation of conventional mathematics and is also denoted by a plus (+) sign between operands. In expression form, it is expressed as “Q = A + B” where A & B are input variables and Q is the sum term.

In a nutshell, the AND function gives the logical product of Boolean multiplication. Likewise, the OR function gives the logical sum of Boolean addition. However, most digital circuits consist of multiple logic gates including AND, OR, and NOT gates which constitute combinational logic circuits. The combinational logic circuits are widely expressed as Sum-of-Products or Product-of-Sums as they include both AND, and OR functions, mainly.

The following truth table is drawn for all of the possible states of A, B, and C. The output of the above expression is set to “1” for all the terms of sum-of-products expression at their specific input states. 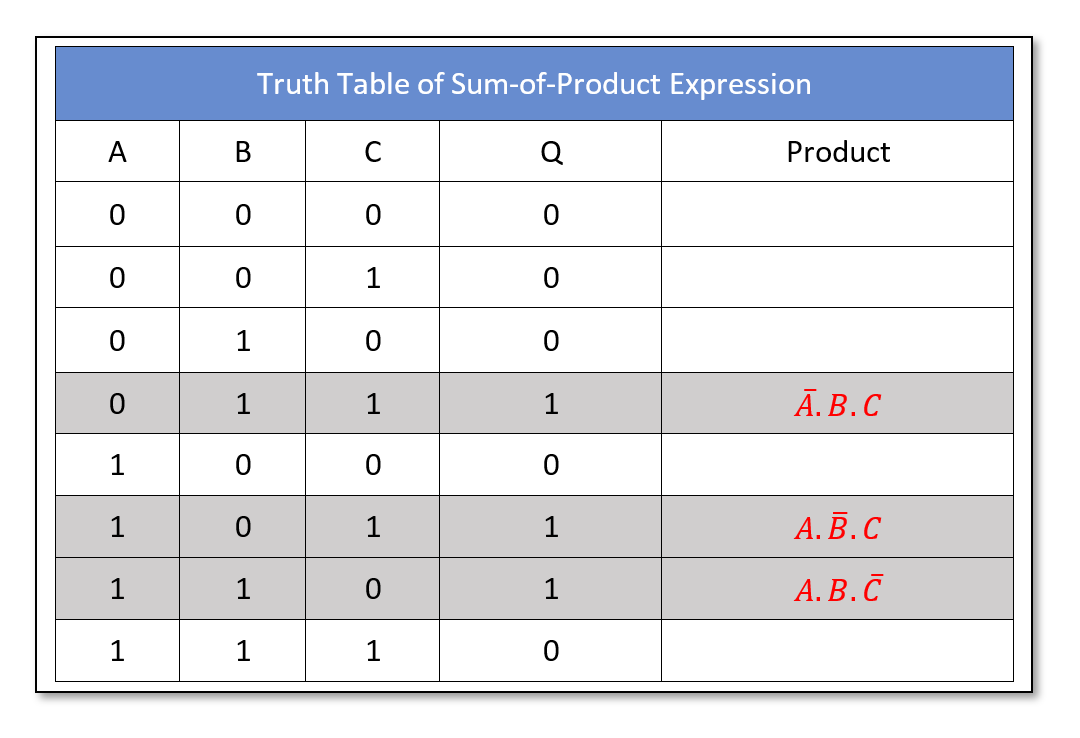 It is obvious from the above table that product terms are set to “1” for that specific state of inputs and the rest of the output states are set to “0”. When any of the terms is “1” then OR (sum) function sets the output to “1”.

Likewise, a Boolean sum-of-product (SOP) expression can be constructed from a given truth table. Consider the following truth tables. 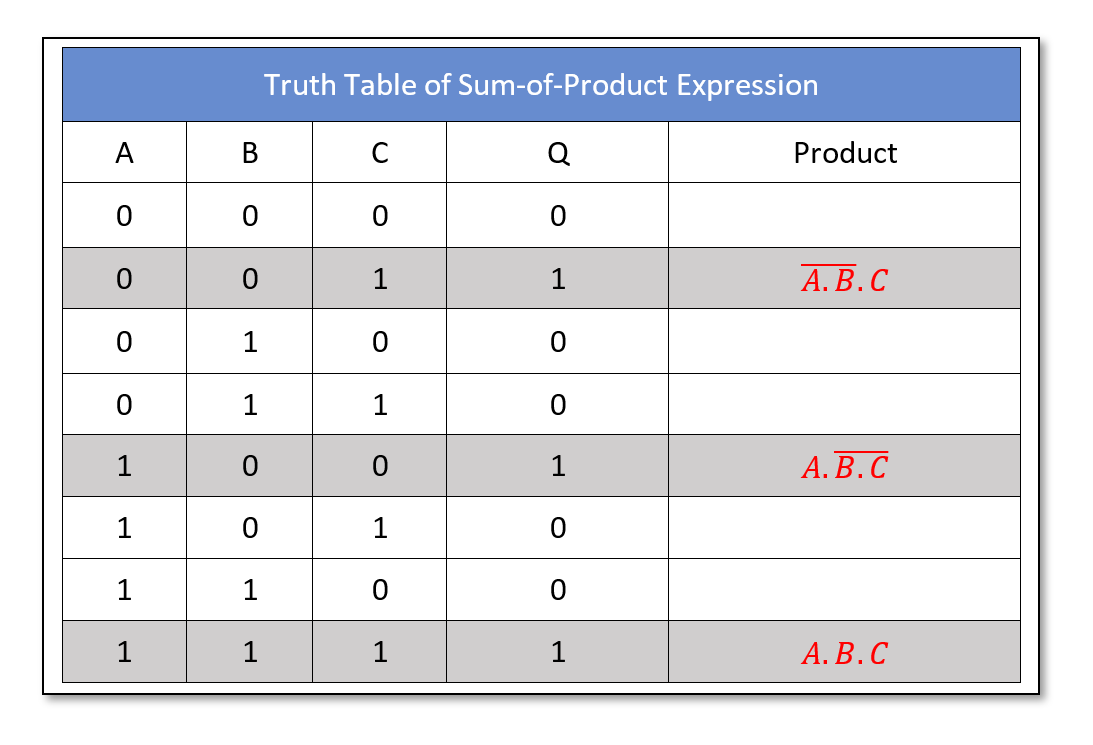 From the above truth table, the following sum-of-products expression is derived.

Consider the following given Boolean expression:

The expression is in non-standard form of the sum-of-product and as such converted into SOP form:

The following truth table is constructed from the above sum-of-product expression. 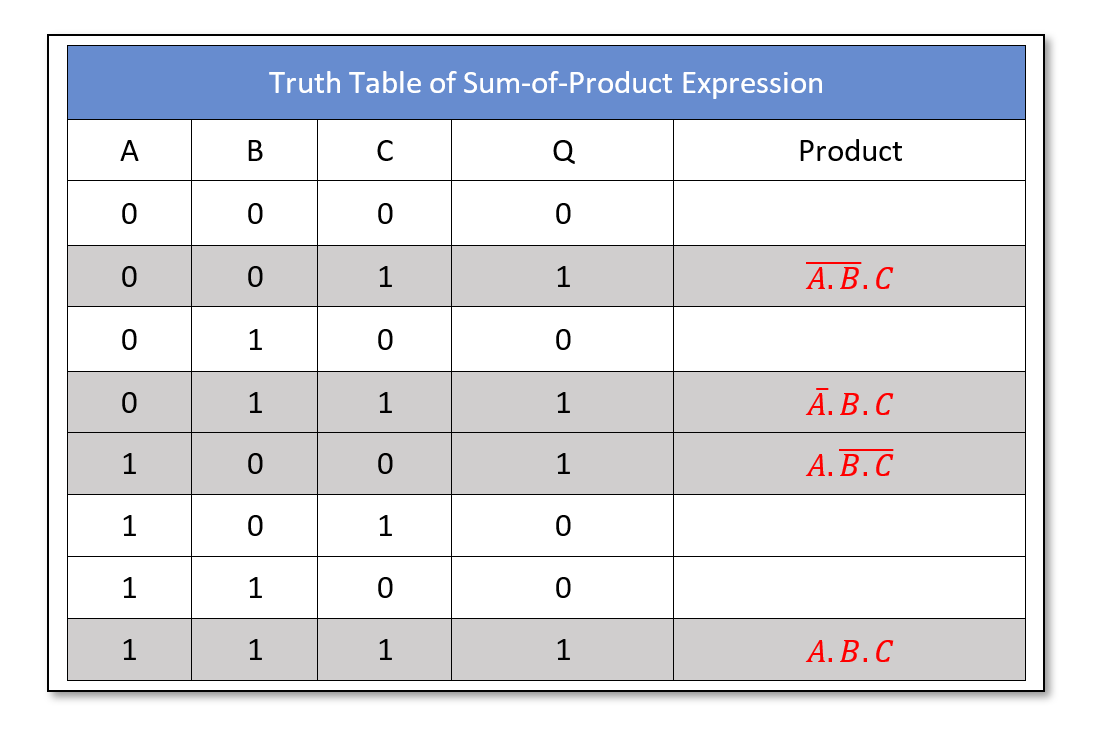 From the given sum-of-products expression following logic diagram is created.

Following the above example, any non-standard expression can be converted into a sum-of-product expression and a truth table from it.