A digital logic circuit can be represented by an equation in the form of Boolean Expression which describes the relationship of inputs and outputs of each logic gate with others. The overall function of a Boolean Expression and of each individual logic can also be expressed in table form which is called a Truth Table. The Boolean Expression of the digital circuit is used to construct a Truth Table for its respective function. The Truth Table comprises of inputs and outputs. The total number of inputs available to a digital logic circuit constitutes the inputs and are constructed for each possible state or combination. The function of each logic gate and of the overall digital circuit represents the output. These outputs are determined for each possible state or combination of inputs.

The number of possible states or combinations can be calculated using the following formula:

Number of the Input States or Combinations = 2n

Where “n” represents a total number of inputs a digital logic gate or circuit.

For example, using the above formula, a total of four (4) combinations of states for two inputs are possible. As it is already known from previous articles, that logic gates input and output states are represented in Boolean logic data type which has only two states i.e. “ON” = “1” = “TRUE” & “OFF” = “0” = “FALSE”. However, in Truth Tables, most commonly the states are represented by “1” & “0” Boolean types which are equal to bit values as well. The combinations of states for two inputs (X & Y) are:

For a three-input logic gate or circuit, a total of eight (8) combinations are possible using above given formula. The combinations of states for two inputs (X, Y & Z) are:

Similarly, a four-input logic gate or circuit can have a total of 16 possible combinations. However, in this article, more than a three-input logic gate or circuit is not used for the sake of simplicity. The Truth Tables constructed for two and three inputs represents the logic that can be used to construct Truth Tables for a digital circuit having any number of inputs.

The Truth Tables of logic gates along with their symbols and expressions are given below.

It is a single input gate and inverts or complements the input. For example, it outputs a “TRUE” or “1” when input is “FALSE” or “0” and vice versa.

The OR gate outputs “TRUE” or “1” for all input combinations except when all of its inputs are “FALSE” or “0”.

For a two-inputs AND gate:

For a three-input AND gate: 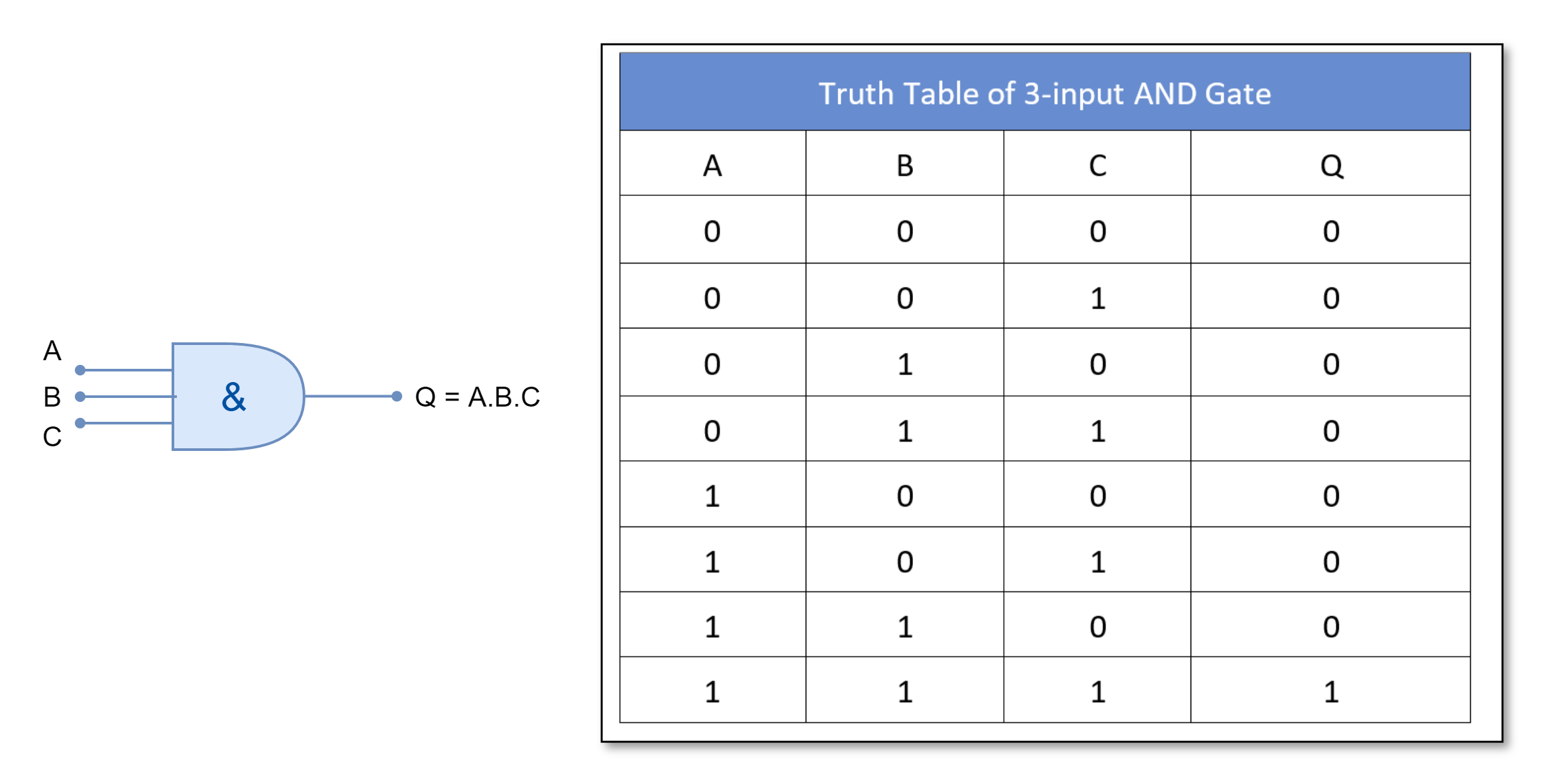 The NOR gate is the inverted form of OR gate i.e. a NOT gate is placed at the of an OR gate constitute a NOR gate. It outputs “FALSE” or “0” for all input combinations except when all of its inputs are “FALSE” or “0”.

The NAND gate is the inverted form of AND gate i.e. a NOT gate is placed at the of a AND gate constituting a NAND gate. It outputs “FALSE” or “0” only when all of its inputs are “TRUE” or “1”.

Besides, the above-mentioned logic gates, the Exclusive-OR (XOR) and Exclusive-NOR (XNOR) gates represent the most widely and commonly used logic. These logics are used in arithmetic computations and data checking circuits etc. Due to their importance in logic circuits, they are available in digital I.C. packages and hereby included in the article. 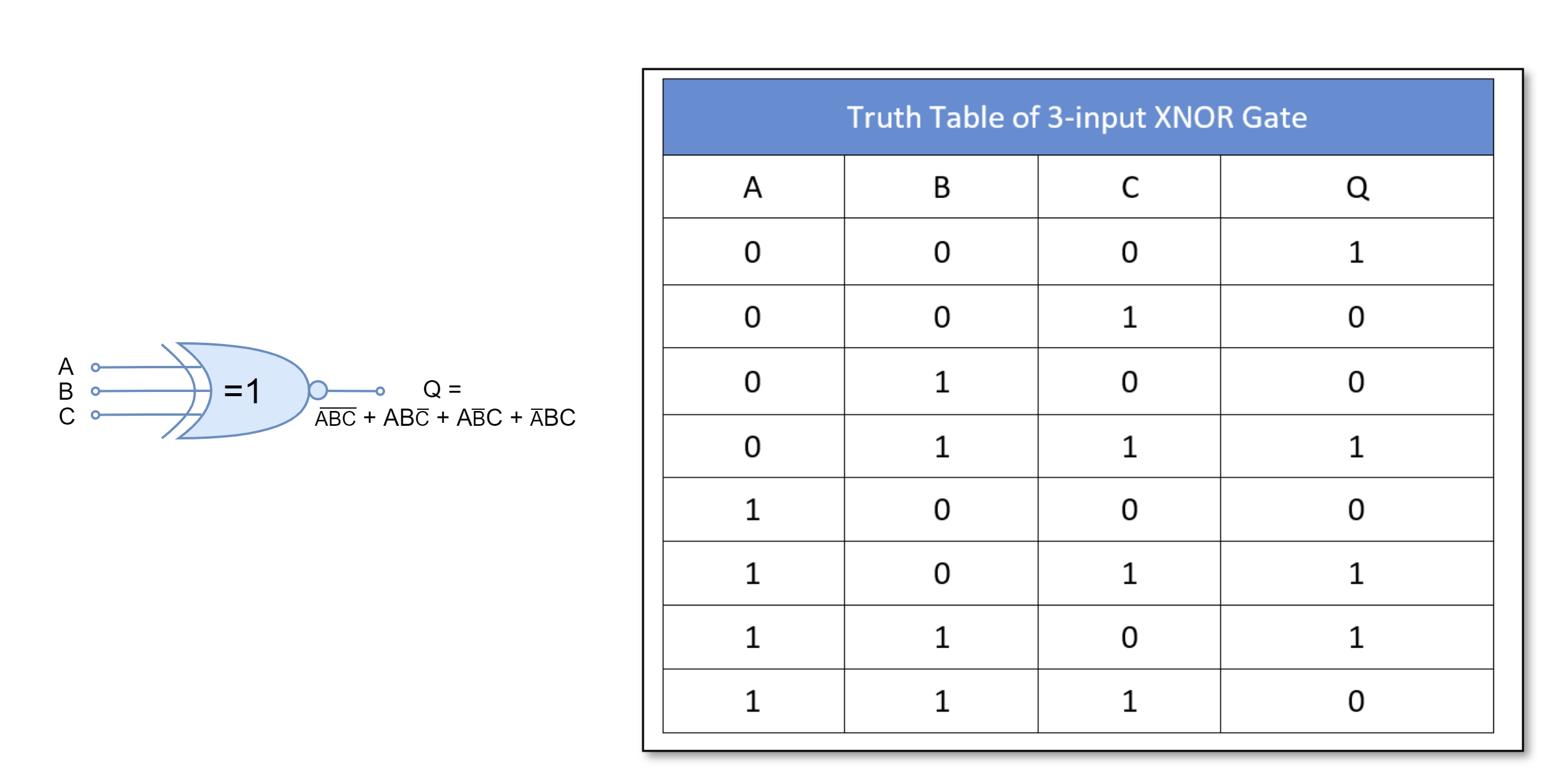 In the following figure, a Truth Table is constructed from the given logic diagram. The Truth Table constructed, shows the output of each logic gate against the input combinations besides the overall function logic circuit output. 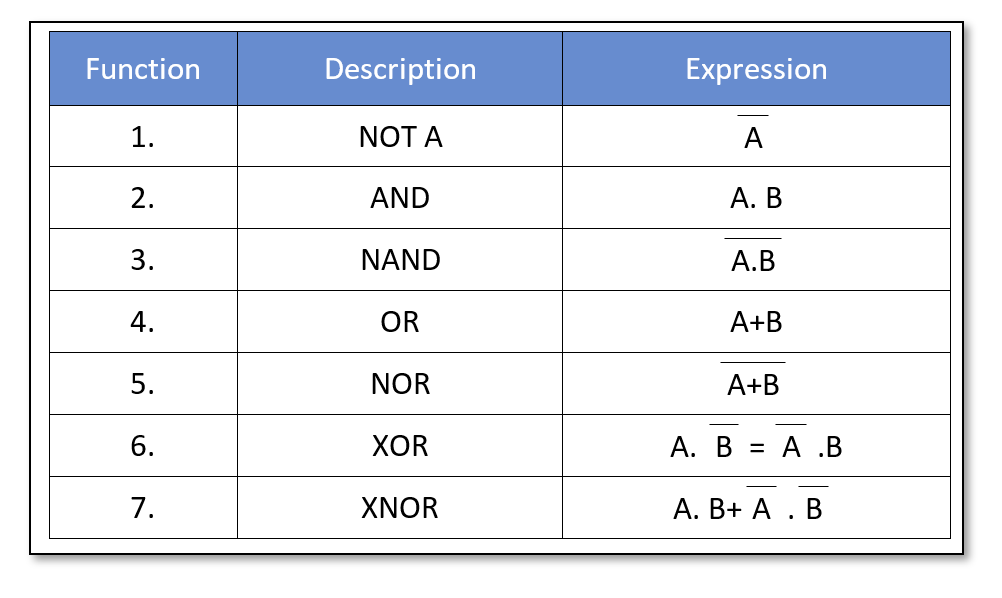