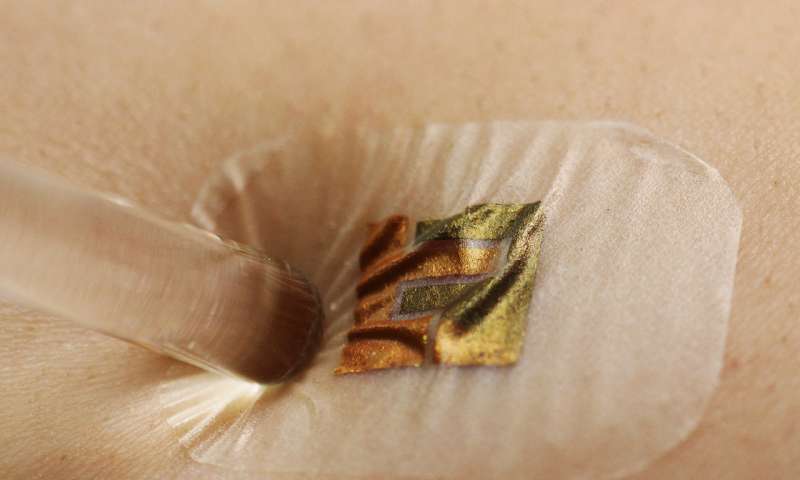 A team of researchers from Tsinghua University in cooperation with People’s Liberation Army Air Force General Hospital, China, has produced a two-stage patch to test the blood glucose levels. They published their research paper on the open access site Science Advances. In the paper, the group describes their patch system and how it succeeds in a small sample test with volunteer human patients.

In this new effort, the researchers of Tsinghua University sought to make life a little easier for people living with diabetes by developing an easier way to test their glucose levels. Now they can easily monitor their own blood glucose level and maintain their diet accordingly.

For most diabetics, the conventional method was to check their glucose levels by using a small device that pricks the skin just enough to draw a very tiny amount of blood, usually from a fingertip. A drop of blood is then squeezed onto a test strip inserted into a glucose monitoring device, which then shows a reading. This painful and prone to infection process often causes many diabetics to stop testing their blood glucose level, hence putting themselves at higher risk.

In this new procedure, the researchers introduced a two-stage, non-invasive method to accomplish the same result. The first stage consists of placing a small amount of Hyaluronic acid, a component frequently found in skincare products, on the skin and then pressing a paper battery on the same area. The battery pushes the acid to make its way into the skin. Then the acid induces a change in osmotic pressure in the subcutaneous fluid. That forces glucose back upwards toward the outer surface of the skin. After 20 minutes, the battery is removed and the second stage takes place. A 3μm thick, five-layer biosensor is attached to the same place of the skin. It looks like a Band-Aid with a square of gold foil on its center. The biosensor can be read by standard lab equipment.

A clinical trial of their device on a woman with diabetes and two other non-diabetic patients at the hospital showed that results were nearly as good as standard lab equipment without causing any discomfort to the volunteers. In the following video, the researchers explain how it works: