The logic NOT gate always returns a not (opposite) of the input signal. It is the simplest and most basic form of a logic gate having only one input and one output. The logic NOT gate is also termed as Inverting Buffer or an Inverter because of its inverting response.

The logic NOT Boolean expression or logic can be expressed as:

The logic NOT gate can be constructed using a simple Resistor – Transistor logic as shown in the following figure:

The transistor switches between saturated “ON” and “OFF” states depending upon the signal present at its base. At logic “LOW”, the transistor will be in “OFF” state and the logic “HIGH” appears at the output. Whereas, a logic “HIGH” at the input of the base will switch the transistor to an “ON” state and connects the output to the ground or zero potential. Hence, a logic “LOW” appears at the input. It is obvious that the circuit is performing as a function of inverter or logic NOT gate.

The logic NOT gate symbol has a triangular shape and points towards the output with a circle. The circle denotes the inversion and is called “Inversion Bubble”. The base or flat side of the triangle has the input connected to it. The symbol of a logic NOT gate is shown below:

The simple truth table of a simple NOT gate is: 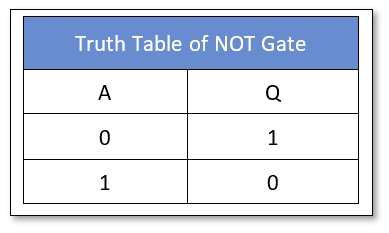 The following set of figures show a number of variations of logic inversions.

The logic NOT gate is available in both TTL and CMOS logic families. Normally 4 or 6 NOT gates are packed within a single commercial IC package. The most commonly used NOT logic packages are:

CMOS based OR Gate IC Package

TTL based OR Gate IC Package

Example of OR Logic

In the following figure, a NOT gate is used to drive a 12V relay to switch on the lamp using NI Multisim. The NOT gate (74LS04) energizes the relay when a “LOW” logic input is applied. The relay thus turns on the lamp through an external circuit of 12V. When the input is at the logic “HIGH” level, the 74LS04 will invert the “HIGH” to “LOW” and switch off the relay to turn off the lamp.

Figure 5: A Multisim circuit showing “NOT” logic to control an external circuit

NAND and NOR Gate Equivalents

As discussed above, a logic NOT gate can be constructed using a transistor. However, transistors take time to switch between saturated “OFF” & “ON” states. The switching is accompanied by some time delay in transistors and is not instant. Moreover, the transistor has the dominant characteristic of amplification and which may lead to its operation in amplification mode. In linear amplification operation, a small change in the input leads to a significant change in its output which can also cause to switch between “OFF” & “ON” states abruptly. A Schmitt Inverter or Hex Inverter can be used to avoid these problems.

As discussed in the previous article(s), in TTL family 2 to 5V is considered as logic “HIGH” and 0 to 0.8V as logic “LOW”. The voltage level of 0.8 and 2V can be set as Lower Threshold Voltage (LTV) and Upper Threshold Voltage (UTV), respectively. The Schmitt Inverter operates on these LTV and UTV limits and changes its state instantly. Whenever the input voltage level rises above UTV i.e. 2V then Schmitt Inverter output changes to logic “LOW” (obviously, it is an inverter), and as soon as input voltage drops below LTV i.e. 0.8V then its output changes to logic “HIGH”. It keeps the previous state during the transition period and switches state instantly upon reaching threshold voltages. It can be said to have a Hysteresis built into the Schmitt Inverter.

A very useful and common application of Schmitt Inverters is found in oscillators.

A simple Schmitt RC oscillator is shown in the following figure.