A logic gate is a basic building block of a digital circuit and they constitute complex Integrated Circuits (IC’s) and microcontrollers etc. having multiple inputs and outputs connected to external circuitry. These logic inputs and outputs can have only two states that are “0” and “1” or “LOW” and “HIGH”, respectively. These logic states represent two different voltage levels such as a logic “0” by a 0 Volts and logic “1” by a +5 Volts. These logic states are differentiated by different voltage levels or ranges depending upon the type of logic family. Any voltage below a certain level may lead to a “0” state and, on the other hand, any voltage above a certain level may lead to a “1” state.

The digital logic circuits make decisions based on only these two states and a voltage outside of differentiable logic levels could lead to uncertainty and the state of logic “0” or “1” cannot be sensed correctly. Such a condition could falsely trigger a digital circuit or logic gate.

Consider the following digital circuit, the recognizable voltage states for this digital gate are 0V and +5V for logic “LOW” and “HIGH”, respectively. The “X” & “Y” inputs of the digital circuit are connected to the ground (0V) through respective switches namely “a” &”‘b”. When the switch “a” is in close (ON) position then input “X” is connected to ground (0V) which is the correct voltage stage for logic “LOW”. Similarly, the closing of the switch “b” leads to the “LOW” logic state as well.

However, when switch ‘a’ is open (OFF) then there is no voltage connected to the input “X” and an expected state would be a logic “HIGH”. But for achieving a logic “HIGH”, the input needs to be connected to +5V which does not seem to be a case here. The input “X” is said to be in the floating condition as it is not effectively connected to any voltage level. Apparently, such a condition may cause input “X” to a have “LOW” logic state but expectations were to have a “HIGH” logic state. Consequently, leading to a false decision at the output “Q”. Moreover, such a floating input is prone to the slightest interferences, and noises could make input change state. The worst could be leading to random shifting of states or oscillation.

The uncertainty, false-triggering, or oscillation in digital circuits due to floating or unused inputs can be prevented by connecting them to a certain voltage level appropriate to the circuit. The tying of inputs defines the logic states in different controlling states of inputs such as seen above in the open switch state where it was unused. In digital circuits, many digital gates or their inputs remain unused and require tying up or down using pull-up or pull-down, respectively. A number of unused inputs prescribing to the same logic state or condition can be tied together using a single pull-up or down resistor.

Consider the following diagram of a two-switches case wherein instead of a floating state a second state is achieved by connecting inputs to +5V (a logic “HIGH” voltage level). Now, when switches are open, a logic “HIGH” state is present at the inputs. However, the closing of any switch would short-circuit the +5V with the Ground (0V) and causing an excessive current to flow. This could fry up the digital gate, input, and/ or circuity if there is no short-circuit protection is present. Instead, a pull-up resistor can be used between input and +5V to overcome this issue. The value of the pull-up resistor should be selected in such a way that when pulled-up allows a sufficient voltage drop to bring input voltage to logic “0”.

In the following figure, a suitable pull-up resistor is used to pull up each input of the digital circuit. When any of the switches are open (OFF) then the respective input is connected to +5V via this pull-up resistor. The current flowing into the input is very small and, as such, causes a negligible voltage drop across the pull-up resistor. Eventually, a full +5V (nearly) gets applied at the input to bring the logic “HIGH” condition.

Upon closing of any switch, the input is effectively connected to ground (0V) and a firm logic “LOW” condition is sensed by the logic gate/ circuit. However, this time, the VCC and Ground are not shorted due to the insertion of a pull-up resistor and a very little current flow through it. Now, both logic “HIGH” and “LOW” states are effectively achieved in the digital circuit using pull-up resistors. The output (Q) of the digital circuit will reflect the true picture of input states which was initially misleading due to floating inputs.

As discussed in previous articles, the logic gates are characterized not only by the operating voltage but also by their current sinking and sourcing capabilities. Besides the two distinct voltage states presenting logic states “0” & “1”, there are maximum and minimum voltages defining voltage ranges for each state. In the following diagram, the voltage ranges for logic “HIGH” and “LOW” states are shown which are separated by an intermediate state.

A number of unused inputs can be connected together with a single pull-down resistor. A sample calculation for a fan-in of 10 is shown below:

The input can be pulled down without using a resistor but is often avoided to avoid excessive current flow or power loss. The pull-down resistor limits the source current flowing towards the ground.

The open-collector or open-drain outputs are mostly used in inverters, drivers, or buffers where the output is connected to a different voltage level or to deliver high output current which may not be possible using normal logic outputs. For example, driving high current LEDs, relays, DC and servo motors, etc.

Consider the following calculation as an example for TTL NAND open-collector (74LS01):

This is the minimum resistance required to limit the current to 8mA which is the maximum current at the logic “LOW” state. In a similar way, the pull-up resistor value can be calculated through which an external load is connected. The external load usually requires high voltage or current and, for this purpose, normally hex inverter buffers are used. The TTL 74LS06 Hex Inverter Buffer uses 5V for biasing but its open-collector can support up to 30 Volts and a maximum of 40mA current at logic “LOW” level.

In the following example, a LED is driven from a 24 Volt supply using a 74LS06 Hex Inverter Buffer. The LED requires 10mA current at a 2.2V voltage drop. The 74LS06 Hex Buffer requires at least 0.1V at the input to sense the “LOW” state. The current limiting resistor value: 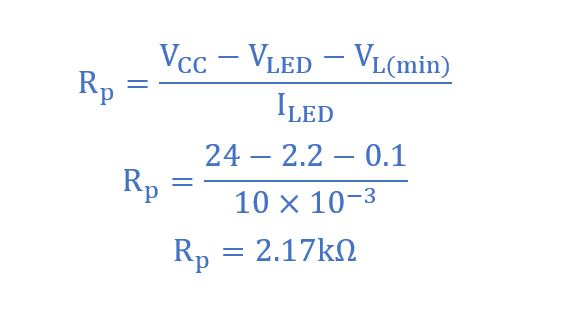