The logic NAND gate is also referred to as Sheffer Stroke Function and is expressed by a vertical bar or arrow between the inputs.

When both inputs “A” and “B” are “HIGH” then both transistors are in saturated “ON” states and a state “LOW” appears at the output (Q). Turning any of the inputs to logic “LOW” will drive the relative transistor to the “OFF” state and pulls the output (Q) high to VCC.

The representation of a NAND logic by a symbol is shown in the following figure. An inversion bubble at the output denotes the inversion of the multiplication.

The truth table of a two-input NAND logic gate is shown below:

Similarly, the truth table of a three-input NAND logic gate is as follow: 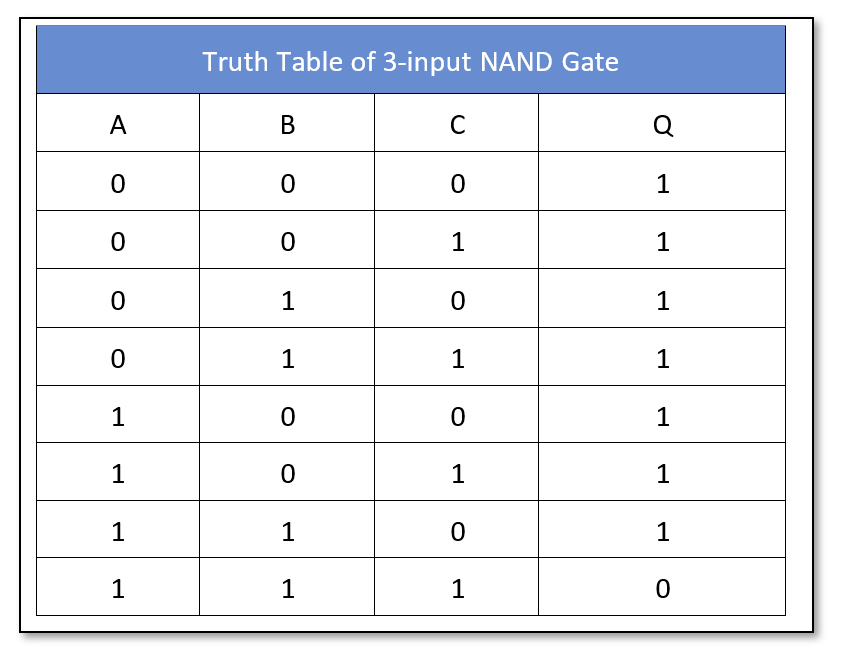 The Boolean expression can be extended to include multiple inputs to obtain a logic NAND operation. The commercially available NAND logic circuits have up to four inputs but the number of inputs can be further extended by cascading the NAND logic circuits. In the following figure, five two-inputs NAND gates are cascaded together to obtain a four-input NAND function.

The NAND logic circuit having an odd number of inputs can be constructed by driving the unused input to logic “HIGH”. This will ensure that another input(s) of the NAND logic gate is truly reflected in the output. It is explained in the following diagram where unused input is pulled high using a pull-up resistor.

The logic NAND gate is described as a universal gate because it can be used to form the other logics i.e. AND, OR, NOT, Exclusive OR, Exclusive NOR, and NOR, etc. It is the most common and widely used logic gate because of its Universal Gating capability. The examples of forming the AND, OR, and NOT logic by using NAND gates are shown in the following figure.

The NAND logic gates are available in both TTL and CMOS logic families. The most commonly used NAND logic packages are:

In the following figure, a NAND gate is used to drive a 12V relay to switch on the lamp using NI Multisim. The NAND gate (74LS00) turns off the relay when all of the inputs are connected to VCC. The relay thus turns off the lamp through an external circuit of 12V. When one of the inputs is connected to Ground, NAND logic goes “ON” turning the relay and lamp to “ON” state.