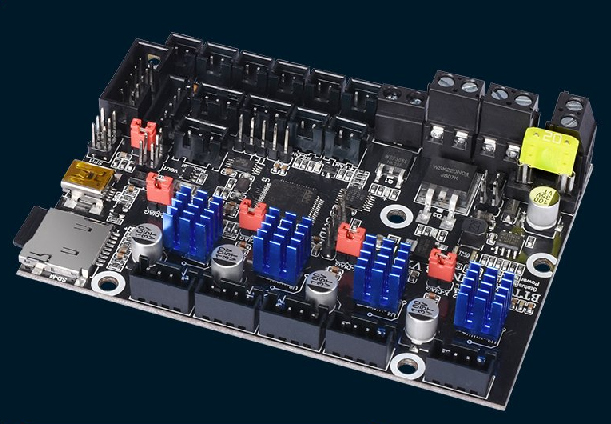 3D printer controller boards are the brains of any 3D printer. All the electrical components are interfaced with the printer motherboard. The main job of the controller is to follow the code from the 3D printer software and produce a 3D printed object. The controller receives various inputs like the extruder temperature or the state of the limit switches, and it controls the stepper motor’s direction on the axis. The 3D printer controller consists of a variety of sub-circuits, including a microcontroller, stepper motor drivers, and various sensor ports. There has been a lot of development in the field of additive manufacturing, and using a tailor-made customized motherboard for a particular 3D printing device is a good choice as it can perfectly replace the controller of that original printer.

BIGTREETECH team says about the improvements made in this new version of the control board,

The control board consists of the ARM Cortex-M3 STM32F103RCT6 microcontroller. For motor driving, onboard TMC2209 IC is used. The TMC2209 is an ultra-silent motor driver IC for two-phase stepper motors. It has an easy-to-use UART interface that opens up tuning and control options. The supported file format for coding is GCode and is compatible with software like Cura, Simplify 3D, Pronterface, Reptier-host, and Makerware. The control board supports a double Z-axis interface and other functions like BLTouch, filament detection, power-off resume, automatic shutdown, etc.

The control board uses an MP1584EN power chip which supports 12-24V input power and a maximum current of up to 2.5A. The onboard ports include two CNC fan interfaces. For thermal management, the board utilizes WSK220N04, which has low on-resistance and reduced heat dissipation. Moreover, the heat dissipation capacity is enhanced by enlarging the heat-sinking area on the PCB.

The BIGTREETECH motherboard comes with pre-installed firmware for testing, which can be changed or modified according to one’s needs. The firmware can be found here, and there is a BLTouch pre-configured firmware for SKR-mini-E3 V2.0, which provides support for BLTouch auto-leveling sensors.

In the summary, the BIGTREETECH SKR-mini-E3 V2.0 is a powerful and efficient control board tailor-made for Ender-3 printers.

“It can perfectly replace the motherboard of the original Ender3 printer.” Yes it can, but can work with many other printer as well, including printers with dual Z-axes. Read the GitHub page.