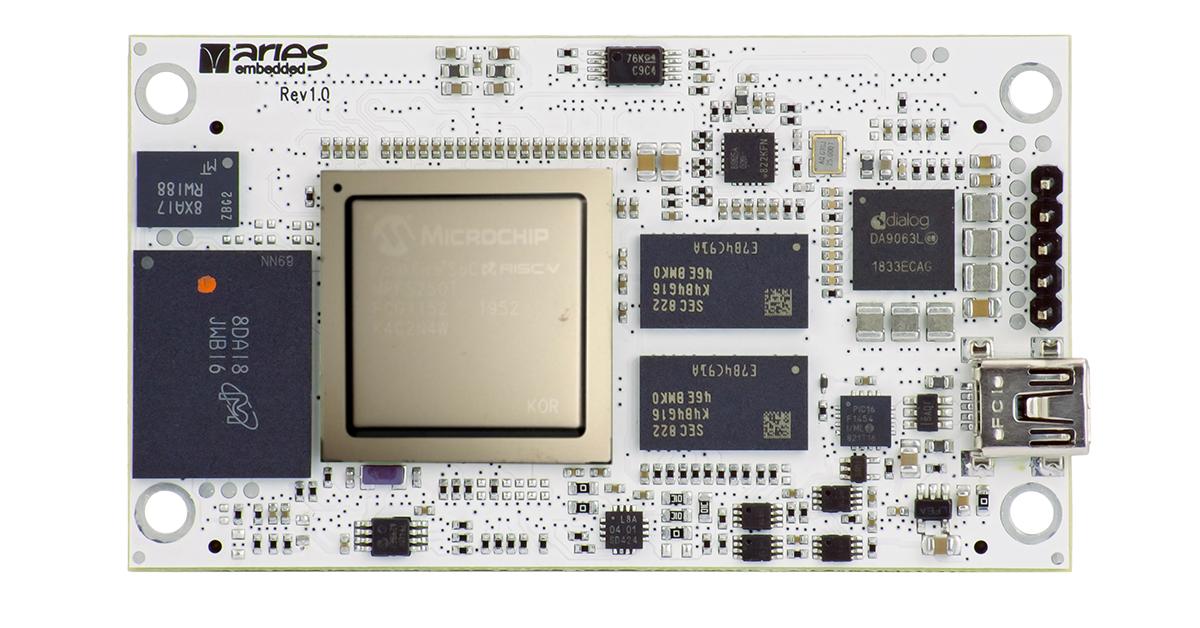 Aries Embedded has launched a Linux-powered, FPGA-enabled RISC-V SoC from Microchip’s Micro semi unit, called the M100PFS. It is one of the first compute modules equipped with the PolarFire SoC. The M100PFS features an identical 74 x 42mm footprint as Aries’ similar M100PF module, which is equipped with the PolarFire FPGA without the Linux-ready RISC-V cores. The M100PFS enables applications like wireline access networks, cellular infrastructure, defense, commercial aviation, industrial automation, and IoT.

The M100PFS incorporates a 32 MBit SPI NOR flash and also an “execute in place” Quad SPI flash controller. It offers support for up to 64GB eMMC by order. Its 3.3V, 0 to 70°C tolerant module features dual 180-pin Samtec board-to-board connectors. I/O features includes 2x GbE, 2x CAN 2.0 A and B, 2x SPI, 2x I2C, 5x multi-mode UARTs, and single USB 2.0 OTG and MMC 5.1 SD/SDIO connections. Additionally, the module enables GPIO, an RTC, a clock distribution, and different timers, inclusive of 5x watchdogs. The announcement does not include a carrier board, but the FPGA-only M100PF module features an optional M100PFEVP baseboard. The carrier features a microSD slot plus 2x GbE ports, a micro-USB port, 4x DB9 ports, and 2x UART and 2x CAN ports. The M100PFEVP also features a TFT, HSMC, and 3x PMOD connectors. The M100PFS module will be available along with the Linux- and FPGA PolarFire SoC development tools.

The M100PFS is available now for order, with an undisclosed price. Shipping is expected to begin in Q3 2020. For early access and customization services, you have to make a special request. More information can be found in the Aries Embedded announcement and product page.