The AND logic returns logic “HIGH” when all of its inputs are in the “HIGH” logic state. In other words, the output of AND gate will be “LOW” when any of the inputs is in the “LOW” logic state. In order to obtain a logic “HIGH”, all of its inputs should be “HIGH” and any of the input turning “LOW” will result in the output being driven to logic “LOW”.

In the following figure, a basic two-input AND gate constructed using Resistor-Transistor Logic (RTL) are shown. For each input, a Transistor (T) is used and the output is driven across the Resistor (R). In this type of AND logic circuit, the transistors are operated in saturated “ON” & “OFF” states.

When both inputs “A” and “B” are “HIGH” then both transistors are in saturated “ON” states and a state “HIGH” appears at the output (Q). Turning any of the inputs to logic “LOW” will drive the relative transistor to the “OFF” state and thus incomplete path across VCC & Ground yields state “LOW” at the output (Q).

The representation of a AND logic by a symbol is shown in the following figure. Its symbol denotes the multiplication/ AND logic operation.

The truth table of a two-input AND logic gate is shown below: 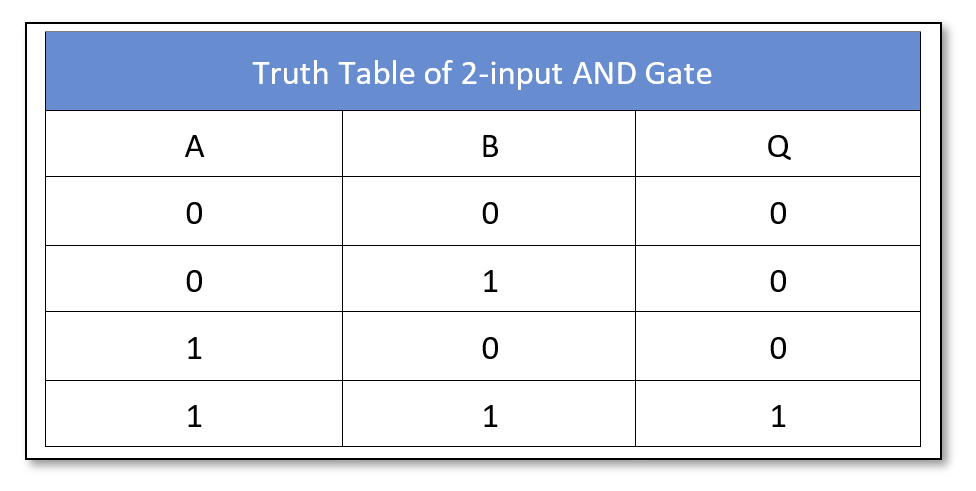 Similarly, the truth table of a three-input AND logic gate is as follow: 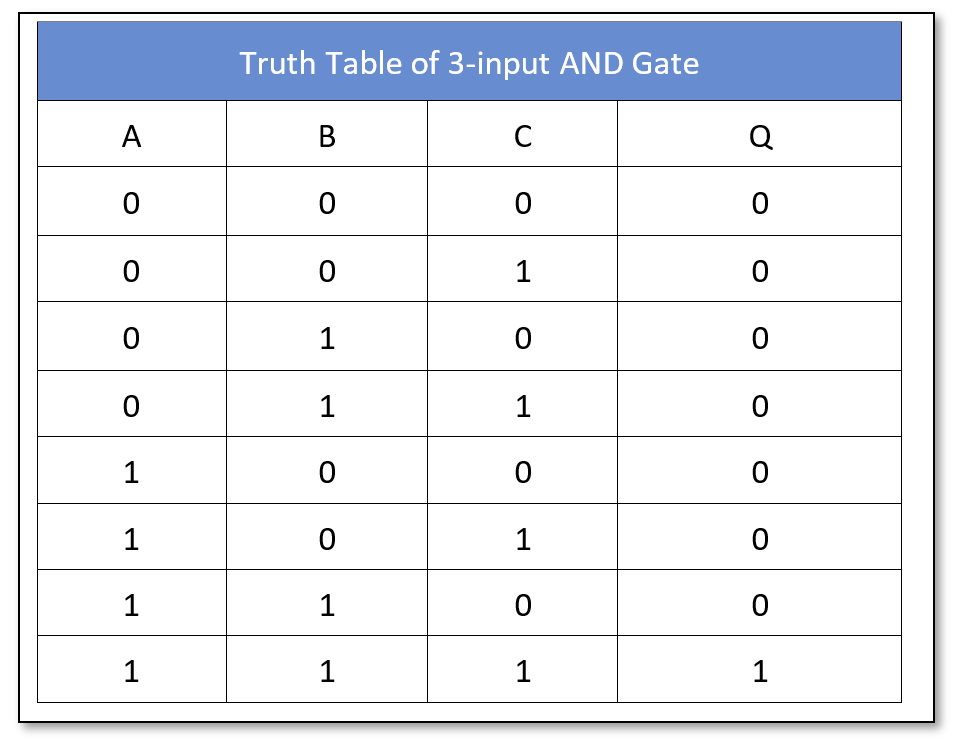 The Boolean expression can be extended to include multiple inputs to obtain AND logic operation. However, commercially available AND logic circuits have up to four inputs but the number of inputs can be further extended by cascading the AND logic circuits. In the following figure, three two-inputs gates and one three-input AND logic gate are cascaded to construct a six-inputs (2 x 3 = 6) AND logic circuit.

The AND logic circuit having an odd number of inputs can be constructed by driving the unused input to logic “HIGH”. This will ensure that another input(s) of the AND logic gate is truly reflected at the output. It is explained in the following diagram where unused input is pulled high using a pull-up resistor.

The AND logic gates are available in both TTL and CMOS logic families. The most commonly used AND logic packages are:

CMOS based AND Gate IC Package

TTL based AND Gate IC Package 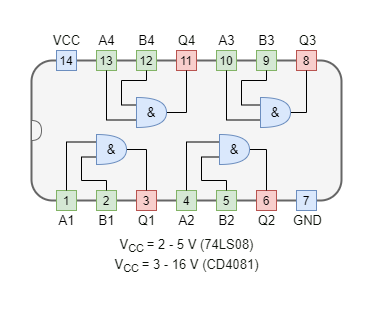 Example of AND Logic

In the following figure, a AND gate is used to drive a 12V relay to switch on the lamp using NI Multisim. The AND gate (74LS08) energizes the relay when all of the inputs are connected to VCC. The relay thus turns on the lamp through an external circuit of 12V. When one of the inputs is connected to ground AND logic goes “OFF” turning the relay and lamp to “OFF” state as well.