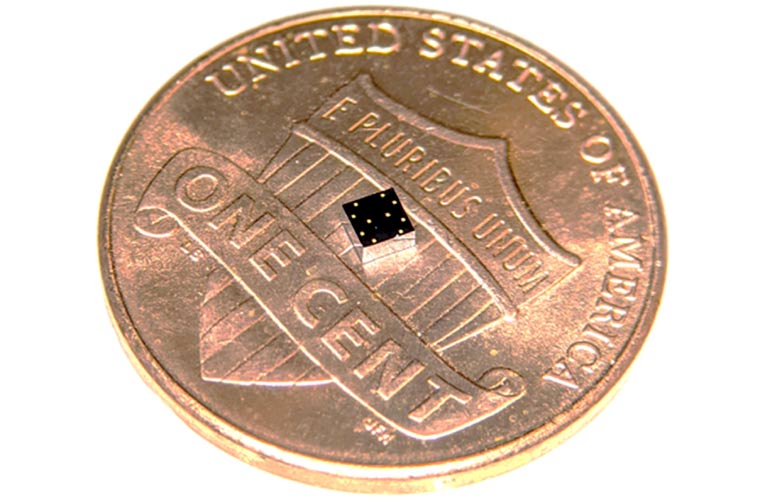 A team of researchers at the ‘Georgia Institute of Technology’ has come up with a non-invasive sensor-in-a-chip that records details of the heartbeat, respiration rates, and lung sounds. It even tracks the wearer’s physical activities, such as walking. The signals are recorded in sync, potentially giving healthcare workers a detailed overview of a patient’s heart and lungs.

The ladybug sized chip acts as a high-tech electronic stethoscope combined with an accelerometer and is called an accelerometer contact microphone. It detects vibrations that enter from inside the body while filtering out distracting noises from outside the body’s core like airborne sounds. The sounds thus produced are analyzed to get detailed information on the patient.

The device is sensitive to sounds coming at it from inside the body and it picks up useful vibrations even through clothing. The chip has two thin layers of silicon sandwiching a 270 nm gap, each carrying a small voltage which gives it a sensing capability. Vibrations from bodily motions and sounds send pressure waves through the chip which makes the voltage change subtly and creates readable electronic outputs.

The sensor is a chip attuned to vibrations and next to it is an electronic chip called a signal-conditioning circuit that translates the sensor chip’s signals into patterned read-outs. While the chip was being tested on humans, it recorded a variety of signals from the mechanical workings of the lungs and the heart with great clarity. The team plans to attach three sensors or more to a chest band to triangulate signals, determining exactly where they come from inside the body.

The chip is sealed inside a vacuum cavity to keep air currents from interfering with incoming vibrations. This reduces noise to an ultra-low level and gives the sensor an incredibly broad bandwidth. The researchers used a manufacturing process developed in Ayazi’s lab called the Harps+ platform (high aspect ratio poly and single crystalline silicon) for mass production. Thereafter, hand-sized sheets were cut to the needed size.