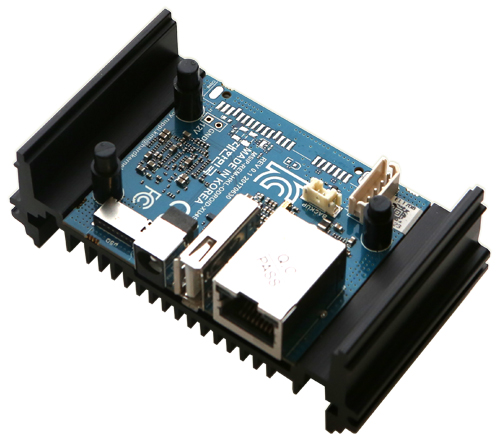 Hardkernel has produced a single-unit version of its four-unit, 32-core Odroid-MC1 cluster computer for running Docker Swarm, Build Farm, and other parallel computing applications. The design offers greater flexibility for users to combine Odroid-MC1 Solo units for a “single unit, 2, 3, 4, 5, 6, or n stackable cluster”. The octa-core Odroid-MC1 Solo costs $48. Combing one or more Solo units with the original 4-unit MC1 acts as a single cluster.

The Odroid-MC1 Solo and Odroid-MC1 use an Odroid-XU4S SBC that is similar to the SBC that powers the Odroid-HC2 network attached storage (NAS) device. Both boards are smaller, stripped-down, headless version of the open-spec Odroid-XU4 SBC.

All these boards are equipped with 2GB LPDDR3 (in a PoP configuration), as well as a GbE port, USB 2.0 host port, and a bootable microSD slot with UHS-1 support. The XU4s used on the Odroid-MC1 lacks the one additional feature found on the HC2 NAS computer that is a USB 3.0-based SATA port.

The new Odroid-MC1 Solo board, including the stacking case, measures 92 x 42 x 29mm. These boards are powered by a 5V/4A power supply. A UART, an RTC with battery connector, as well as “M3 x 8mm” self-tapping screws are also there on this board. The XU4-compatible Linux image is based on Kernel 4.14 LTS.