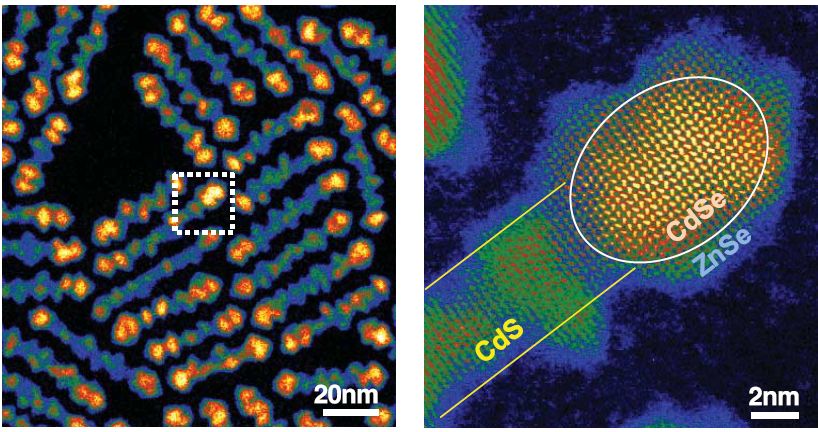 A team of researchers from the US and South Korea reported a unique type of NanoLEDs with unprecedented brightness levels, that excess 80,000 cd/m2, and also can operate both as light emitters and light detectors.

These new LEDs are about 50nm long and 6nm in diameter. As described in the paper, they included quantum dots of two different types, one of which can enhance radiative re-combinations (useful for LEDs) while the other type leads to efficient separation of photo-generated carriers.

The research of this invention had been published in a paper titled “Double-heterojunction nanorod light-responsive LEDs for display applications“. The researchers consider the dual-mode LEDs will pave the way to new types of interactive displays.

As we head toward the “Internet of things” in which everything is integrated and connected, we need to develop the multi-functional technology that will make this happen. Oh et al. developed a quantum dot-based device that can harvest and generate light and process information. Their design is based on a double-hetero-junction nano-rod structure that, when appropriately biased, can function as a light-emitting diode or a photodetector. Such a dual-function device should contribute to the development of intelligent displays for networks of autonomous sensors.

The device can reach a maximum brightness in excess of 80,000 cd/m2 with a low turn-on voltage (around 1.7 V). It also exhibits low bias and high efficiencies at display-relevant brightness. The research team reports an external quantum efficiency of 8.0% at 1000 cd/m2 under 2.5 V bias.

One of the experiments was operating a 10×10 pixel DNHR-LED array under reverse bias as a live photodetectors, combined with a circuit board that supplied a forward bias to any pixel detecting incident light. And by alternating forward and reverse bias at a sub-millisecond time scale, light-detecting pixels could be “read out” as they illuminated the array.

Future applications of the DNHR LEDs include: