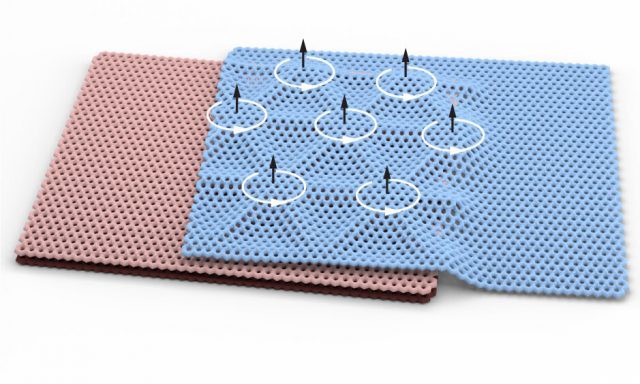 A group of scientists at Columbia University and the University of Washington has found unique electronic states along with an uncommon kind of magnetism, can develop in a three-layer graphene structure.

The work was inspired by current research studies of twisted monolayers or twisted bilayers of graphene, making up either 2 or 4 overall sheets. These results were discovered to treat a range of uncommon electronic states driven by strong interactions between electrons.

We wondered what would happen if we combined graphene monolayers and bilayers into a twisted three-layer system,

stated Cory Dean, a teacher of physics at Columbia University and among the paper’s senior authors.

We found that varying the number of graphene layers endows these composite materials with some exciting new properties that had not been seen before.

To conduct the experiment, the scientists stacked a monolayer sheet of graphene onto a bilayer sheet and twisted them by about 1 degree. At temperature levels a couple of degrees over, the group observed a range of insulating states and which do not carry out electrical energy, but they are driven by strong interactions between electrons. They also discovered that these states can be managed by using an electrical field throughout the graphene sheets.

We learned that the direction of an applied electric field matters a lot,

stated Yankowitz, who is likewise a previous postdoctoral scientist in Dean’s group.

Besides, the group found completely new magnetic statesin the twisted system. Unlike standard magnets, which are driven by a quantum mechanical residential or commercial property of electrons called “spin“. As they observed, a collective twisting movement of the electrons in the group’s three-layer structure carries the magnetism.

“This is really just the beginning,” as stated Yankowitz, because they are dealing with the experiments to improve and understand the basic properties of the brand-new states they found in this research.

More information can be found in this research paper.