Skip to content
HomeBlog Particle accelerator fits on a chip 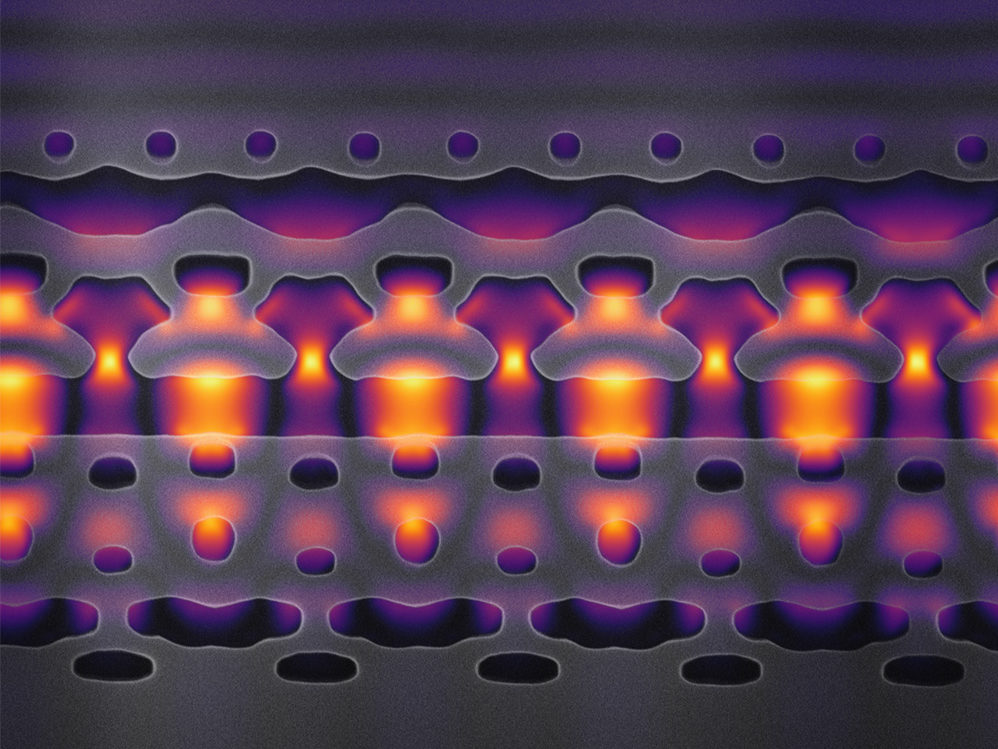 Particle accelerator fits on a chip

Researchers at Stanford University have demonstrated the acceleration of electrons through what they describe as an “On-chip integrated laser-driven particle accelerator”, detailed in a recent paper published in the Science journal. by Tom Abate

On a hillside above Stanford University, the SLAC National Accelerator Laboratory operates a scientific instrument nearly 2 miles long. In this giant accelerator, a stream of electrons flows through a vacuum pipe, as bursts of microwave radiation nudge the particles ever-faster forward until their velocity approaches the speed of light, creating a powerful beam that scientists from around the world use to probe the atomic and molecular structures of inorganic and biological materials.

This image, magnified 25,000 times, shows a section of an accelerator-on-a-chip. The gray structures focus infrared laser light (shown in yellow and purple) on electrons flowing through the center channel. By packing 1,000 channels onto an inch-sized chip, Stanford researchers hope to accelerate electrons to 94 percent of the speed of light. (Image credit: Courtesy Neil Sapra)

Now, for the first time, scientists at Stanford and SLAC have created a silicon chip that can accelerate electrons – albeit at a fraction of the velocity of that massive instrument – using an infrared laser to deliver, in less than a hair’s width, the sort of energy boost that takes microwaves many feet.

Writing in the Jan. 3 issue of Science, a team led by electrical engineer Jelena Vuckovic explained how they carved a nanoscale channel out of silicon, sealed it in a vacuum and sent electrons through this cavity while pulses of infrared light – to which silicon is as transparent as glass is to visible light – were transmitted by the channel walls to speed the electrons along.

The accelerator-on-a-chip demonstrated in Science is just a prototype, but Vuckovic said its design and fabrication techniques can be scaled up to deliver particle beams accelerated enough to perform cutting-edge experiments in chemistry, materials science and biological discovery that don’t require the power of a massive accelerator.

“The largest accelerators are like powerful telescopes. There are only a few in the world and scientists must come to places like SLAC to use them,” Vuckovic said. “We want to miniaturize accelerator technology in a way that makes it a more accessible research tool.”

Team members liken their approach to the way that computing evolved from the mainframe to the smaller but still useful PC. Accelerator-on-a-chip technology could also lead to new cancer radiation therapies, said physicist Robert Byer, a co-author of the Science paper. Again, it’s a matter of size. Today, medical X-ray machines fill a room and deliver a beam of radiation that’s tough to focus on tumors, requiring patients to wear lead shields to minimize collateral damage.

“In this paper we begin to show how it might be possible to deliver electron beam radiation directly to a tumor, leaving healthy tissue unaffected,” said Byer, who leads the Accelerator on a Chip International Program, or ACHIP, a broader effort of which this current research is a part.