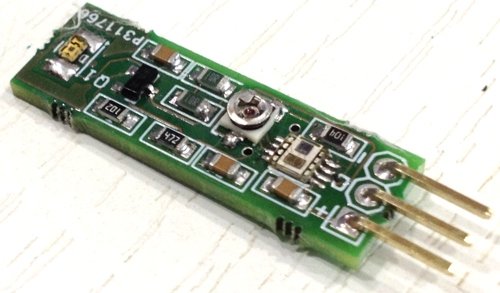 This reflective sensor module is a high-performance 0-5 cm active proximity detector. The sensor can provide a range up to 50cm with higher current infra-red LED and current limit resistor R2, R4 used across IR LED. Because the sensor operates on an absolute reflectance threshold principle, it avoids the ambiguity of motion-based proximity systems. The Si1102 consists of a patented, high-EMI immunity, differential photodiode and a signal-processing IC with LED driver and a high-gain optical receiver. Proximity detection is based on measurements of reflected light from a strobed. The sensor board is based on Si1102 from Silicon Labs. The Si1102 is an active optical reflectance proximity detector with a simple on/off digital output whose state is based upon the comparison of reflected light against a set threshold. An LED sends light pulses whose reflections reach a photodiode and are processed by the Si1102’s analog circuitry.

If the reflected light is above the detection threshold, the Si1102 asserts the active-low PRX output to indicate proximity. This output can be used as a control signal to activate other devices or as an interrupt signal for microcontrollers. Note that when the proximity of an object nears the pre-set threshold, it is normal for the PRX pin to alternate between the on and off states. To achieve maximum performance, high optical isolation is required between two light ports, one for the transmit LED and the other for the Si1102. The Si1102 light port should be infrared-transmissive, blocking visible light wavelengths for best performance. This dual-port active reflection proximity detector has significant advantages over single-port, motion-based infrared systems, which are good only for triggered events. Motion detection only identifies proximate moving objects and is ambiguous about stationary objects.

The Si1102 allows in- or out-of proximity detection, reliably determining if an object has left the proximity field or is still in the field even when not moving. The Si1102 proximity detector is designed to operate with a minimal number of external components. The trimmer potentiometer is used to set the proximity detection threshold. The Si1102 periodically detects proximity at a rate that set programmed by a single resistor (R5). The part is powered down between measurements. The resulting average current, including that of the LED, can be as low as a few microamperes, which is well below a typical lithium batteries self-discharge current of 10 μA, thus ensuring the battery’s typical life of 10 years. When enabled (SREN driven low by a microcontroller or PR1 pull-down potentiometer exists), the Si1102 powers up, and then pulses the output of the LED driver.

Light reflected from a proximate object is detected by the receiver, and, if it exceeds a threshold set by the potentiometer at the SREN pin, the proximity status is latched to the active low PRX output pin. The output is updated once per cycle. The cycle time is controlled through the optional R5 resistor.

Note: It is important to have an optical barrier between the LED and the Si1102. The reflection from objects to be detected can be very weak since, for small objects within the LED’s emission angle, the amplitude of the reflected signal decreases in proportion with the fourth power of the distance. 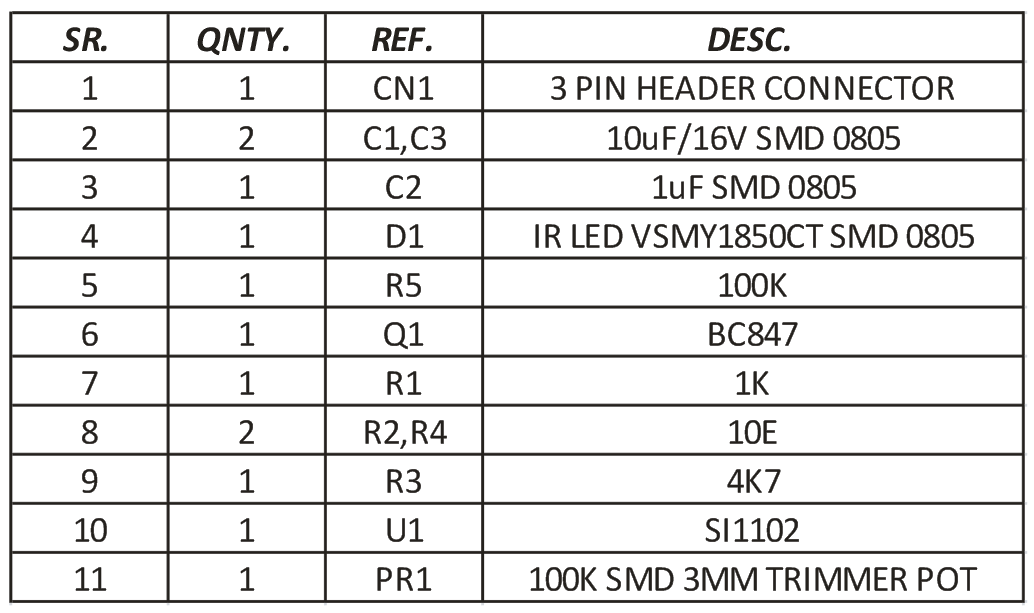 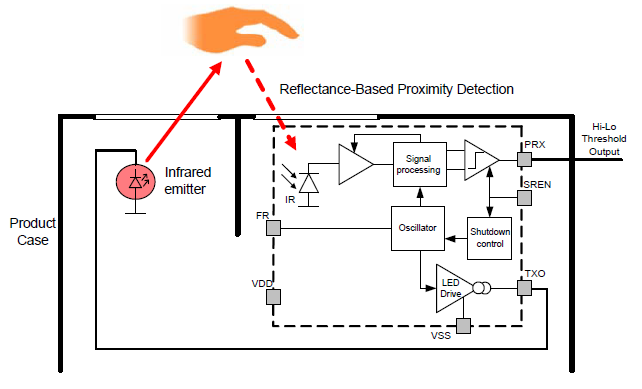 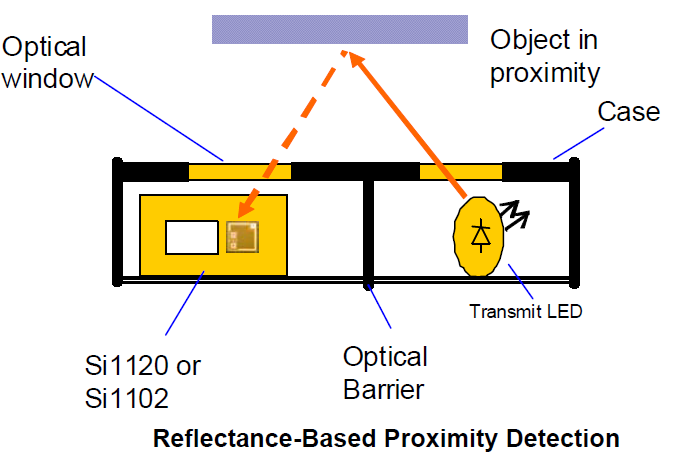