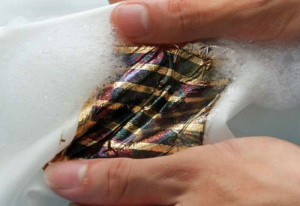 Scientists of Japanese research institute RIKEN and the University of Tokyo have successfully developed a product that allows solar cells to continue to provide solar power after being washed, stretched and compressed. Takao Someya of Riken Center for Emergent Matter Science, a designated national R&D Institute in Japan, led the research team.

The research results were published in the journal Nature Energy and illustrated a photovoltaic material that could be used to make washable outer garments and wearable devices. The researchers say that the innovated solar cells will be a power source to low-power devices and can also be worn concurrently. This innovation might solve one of the biggest challenges of the Internet of Things (IoT), the requirement of a reliable power source to keep all devices connected.

The newly invented solar cells could power wearable devices that include health monitors and sensors for analyzing the heartbeat and body temperature. This could make prevention and early detection of potential medical problems possible. Though the concept of wearable solar cells is not unique, the previous wearable solar cell solutions suffered from the lack of one vital property i.e. long-term stability in air and water, including resistance to deformation.

The recent stretchable solar cell innovation has successfully achieved all of the most important features and is creating the way for the top-notch quality of modern wearable technology. The material on which their new device is based on is called PNTZ4T – a highly efficient polymer solar cell capable of small photon energy loss. The scientists deposited the device onto a parylene film which was then placed onto an acrylic-based elastomer. The construction method has proved to be particularly very durable.

The device produced 7.86 milliwatts per square meter based on a sunlight simulation of 100 milliwatts per square meter before considering resistance and durability. It showed the least decrease in efficiency when soaked in the water and when stretched. The efficiency decreased by only 5.4 percent and 20 percent respectively. Kenjiro Fukuda of RIKEN Center for Emergent Matter Science said,

We were very gratified to find that our device has great environmental stability while simultaneously having a good efficiency and mechanical robustness. We very much hope that these washable, lightweight and stretchable organic photovoltaic will open a new avenue for use as a long-term power source system for wearable sensors and other devices.