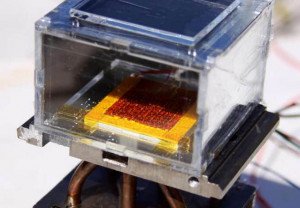 Water Out Of Thin Air

Due to the advances of technology, we are able now to produce water out of thin air without using the resources usually applied like mains utilities. Such approach would be perfect in places that lack natural resources like deserts. Working from the effects of direct solar radiation, a group of researchers at UC Berkeley had designed such a device with minimum mechanical parts and simple embedded systems.

Using a structure known as a Metal Organic Framework (MOF), these researchers have been harvesting water directly from the air (at humidity levels as low as 20%). This humidity level is commonly found in dry regions of the world. The prototype was able to extract 2.8 liters of water per day at an air humidity of 20 to 30%.

MOFs are network-like structures composed of organic compounds and metallic units and have been around since their invention about 20 years ago. Depending on the MOF composition and base materials, certain molecules can be deposited particularly stably into voids in the structure. Gases from hydrogen to methane are possible. Their storage density per volume is actually higher than if the gases were compressed into large hollow tanks.

The water harvester is shown clearly in the first picture, where there is within about 1 kg of MOF crystals pressed between an upper light absorbing layer and a lower condenser plate.

“As ambient air is drawn through the porous MOF, water molecules attach themselves to the interior surfaces. Sunlight entering through a translucent window in the top of the unit heats up the MOF and drives the bound water toward the condenser, which is at ambient temperature via a heat pipe and radiator arrangement below the unit. The vapor condenses and the water drips into a collector.” – Elektor

Knowing how best is this technology can be used and scaling it up with the right parameters, it is predicted to make a breakthrough in the world of regenerating natural resources using solar energy without solar PV cells. More details about this new technology is available at UC Berkeley News.