Skip to content
HomeBlog Bosch BMA400 – Did you thought accelerometers couldn’t get any better? 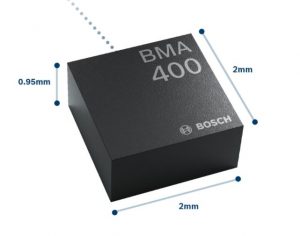 Bosch BMA400 – Did you thought accelerometers couldn’t get any better?

Accelerometers are used in almost all fields, and they have been growing in popularity in IoT and wearables. Nowadays, those devices require a of energy, and because of this, they need to be constantly charged or batteries need to be constantly changed which causes users to lose interest, or to be limited by this problem. Size might be a problem too because some MEMs (micromechanical systems) acceleration sensors are too big to be implemented in everyday portable objects. In June 2018, Bosch will unveil their BMA400, a sensor that extends battery life and has a huge range of capabilities in a small size.

BMA400 is capable of measuring tilt, orientation, tap/double tap, and step counting (with activity recognition) using a low- noise measurement of accelerations in three perpendicular axes. Additionally, the device only uses 10% of the energy current comparable devices use which makes it useful for applications where charging is impossible. For example, this device could be used for package tracking over long distances, saving power by putting itself on sleep mode until something happens (the package is mishandled) which could compromise the quality of the product inside the package.

Other applications include home automation (automatic air conditioning that considers status (open or closed) of windows and doors), security (burglar detection), and sports. The BMA400 includes an activity detection function that can differentiate between walking, running, and standing. All this could be applied into wearables, and because of its size it could be a game changer in hybrid smartwatches (traditional watch with added smarts in a discrete way).

BMA400 measure only 2 mm x 2 mm x 0.95 mm, and device data can be retrieved over longer intervals (FIFO buffer of 1kB). Other specifications include:

This improvements in an already widely used technology could result in advances in thousands of different devices, and in the implementation of this sensor in devices where it couldn’t be fitted before. Improving battery means improving product usability which results in happy users who can now use their device for longer periods of time. Also, makers and hobbyists could now apply this technology to new devices using the increased battery life as an advantage.