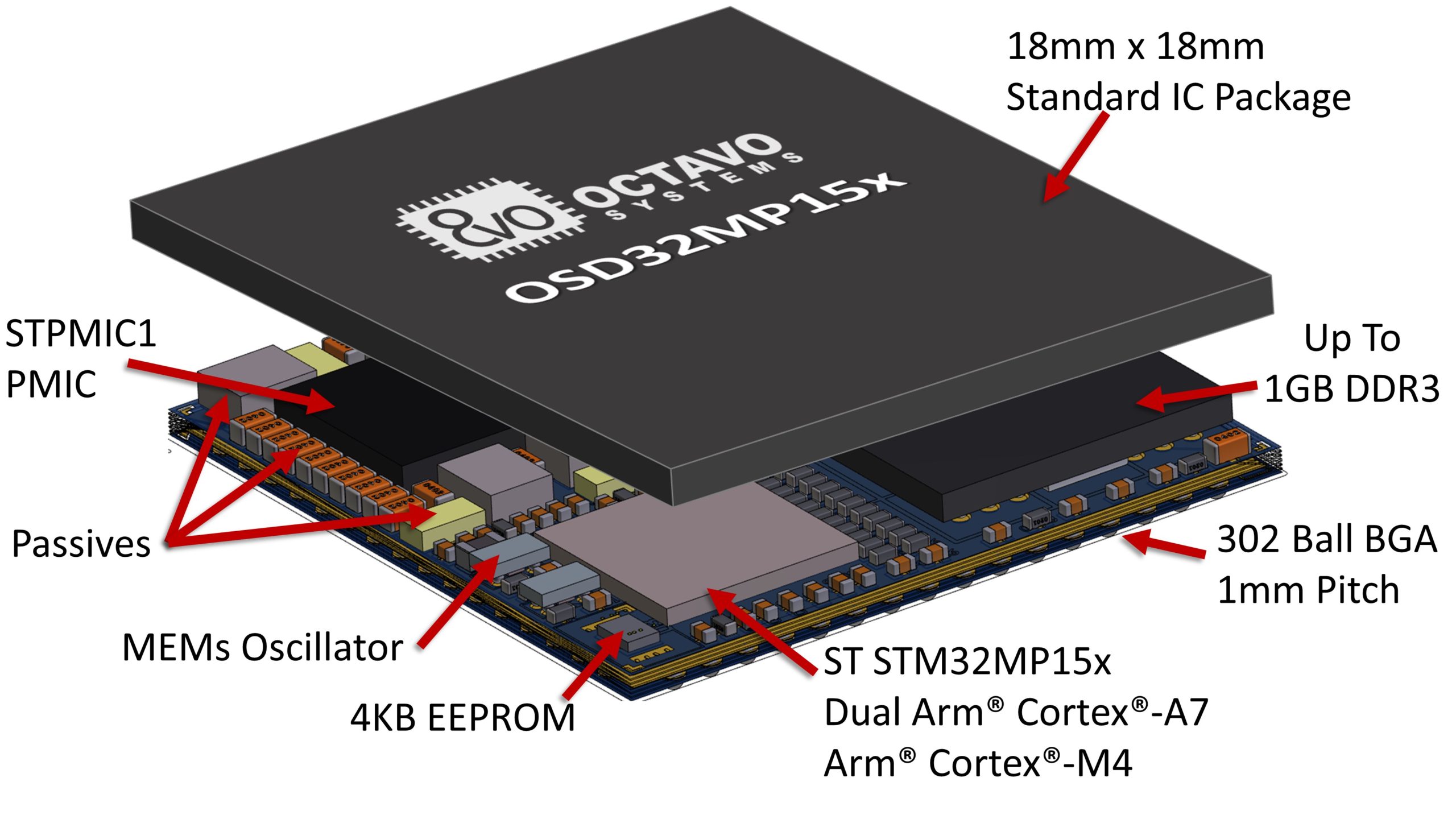 Octavo Systems, an ST Authorized Partner, has expanded its support of the OSD32MP15x System in Package, the smallest available STMicroelectronics STM32MP1 module, with a production release at speeds up to 800MHz, and two new development boards.

OSD32MP15x System in Package In Production at Speeds Up to 800MHz

The OSD32MP15x System in Package has entered full production and can be ordered through Octavo Systems distribution partners now for delivery by the end of March. The OSD32MP15x, already shipping to customers for engineering development, integrates the STM32MP1 Dual Core Arm® Cortex® A7 + M4 microprocessor, up to 1GB of DDR3L RAM, STPMIC1A Power Management IC, EEPROM, MEMs Oscillator, and over 100 passives into a production cost saving, BGA Package.  The OSD32MP15x provides complete access to all the features and performance of the STM32MP1, including the recently announced 800MHz clock speed, while removing tedious tasks like DDR routing and power sequencing. At 18mm x 18mm, the OSD32MP15x is up to 64% smaller than an equivalent system made from discrete components.

“The Octavo Systems OSD32MP15x SiP solution delivers MPU performance while allowing customers to remove complexity from their designs thanks to the MCU-like implementation, so they can focus on the value-added features of their applications,” said Ricardo De Sa Earp, General Manager of the Microcontroller Division, STMicroelectronics. “The OSD32MP15x SiP’s small size makes it ideal for space-constrained environments, while also optimizing system cost thanks to the ability to use 4 layer PCBs.”

Octavo Systems also announced two hardware platforms to speed customers’ development with the OSD32MP15x. The OSD32MP1-BRK, a breakout platform, provides easy access to the I/O on the STM32MP1.  The OSD32MP1-BRK features the OSD32MP157C-512M-BAA System in Package, a microSD card, 32KHz crystal, a USB port, and 2 2×30 100 mil (2.54mm) spaced headers. “The OSD32MP1-BRK provides designers a completely flexible prototyping platform.  By maximizing the number of I/O that are brought out, designers can quickly build a proof of concept that more closely matches their actual system without creating their own board”, said Erik Welsh, CTO of Octavo Systems. “And since the board uses standard 100 mil headers, designers can prototype everything on a breadboard!” The OSD32MP1-BRK is designed and manufactured by Allied Component Works, LLC, a member of the Octavo Systems partner network.  The product ships in April with all design files freely available on the Octavo Systems web site.

The second development platform is the OSD32MP1-RED Reference, Evaluation and Development board.  Developed by Octavo Systems, and shipping in May, it features the OSD32MP157C-512M-BAA SiP, a WiFi and Bluetooth Module, 1GB Ethernet, 8GB eMMC, and HDMI.  The OSD32MP1-RED expands easily by providing connectors that are compatible with Raspberry Pi, MikroElektronika mikroBUS™ Click, and STMicroelectronics Motor Control Header.  The OSD32MP1-RED also provides connectors for a DSI display and a camera.

“The OSD32MP1-RED is a great platform for anyone developing IoT applications or applications needing a high-end HMI,” adds Greg Sheridan, VP of Strategy for Octavo Systems. “With the connectors and peripherals provided the OSD32MP1-RED makes it easy to quickly begin prototyping your system.”