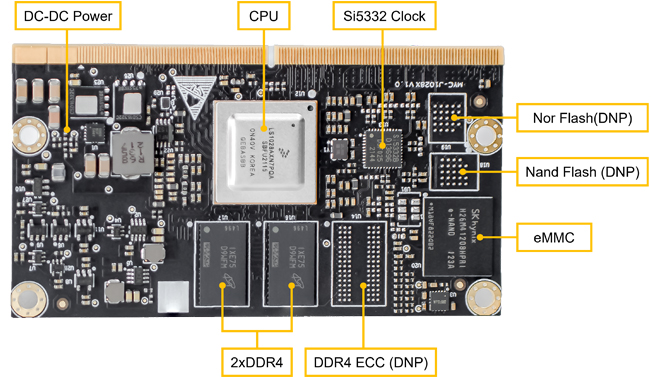 MYIR announced the introduction of their new CPU Module MYC-J1028X running a NXP LS1028A processor based on dual Cortex-A72 Armv8 cores, featuring time-sensitive networking (TSN) based Real Time Ethernet communication and integrated 3D GPU with support for a 4K display. The MYC-J1028X has 2GB DDR4 and supports multiple external memory options including 8GB eMMC (default), QSPI NAND Flash (DNP) and XSPI NOR Flash (DNP). It has 32Kbit EEPROM and one temperature sensor on the rear of the board. A number of peripheral and IO signals are access through one 0.5mm pitch 314-pin MXM 3.0 gold-finger-edge-card connector. It is capable of of supporting Ubuntu and Real-time Edge images based on Linux kernel. Typical applications are industrial router, industrial control, edge computing, automotive electronics, industrial IoT and more others requiring high reliability, powerful communication and display capabilities.

The MYD-J1028X Development Board is a complete evaluation platform for the Layerscape LS1028A applications processor. It consists of an MYC-J1028X CPU Module and a specially designed base board. The MYD-J1028X takes advantages of the LS1028A to have explored rich peripherals through connectors and headers such as one USB3.0 Host, five Gigabit TSN Ethernet, one M.2 Key E based WiFi module interface, one USB 3.0 M.2 Key B based 5G Module interface, one M.2 Key B based SSD Module interface, one DP display port, one Audio output port, one Micro SD card slot, two SIM card slots, etc.

The MYD-J1028X board is delivered with one Quick Start Guide, one Type-C cable, one12V/2A power adapter, and one DC power jack as well as offered software development resources to enable users to start their development rapidly after getting the board out-of-the-box. MYIR also provides MY-CAM002U USB Camera Module and MY-WIREDCOM RPI Module (RS232/RS485/CAN) as options for the board to further enhance its functionality of the board.

The MYC-J1028X supports for -40 to 85 degrees Celsius working temperature and is fully qualified for industrial applications. It is also a high-performance economic ARM SoM, pricing at $179/pc. Discount is to be offered for volume quantities.

More information about the MYC-J1028X CPU Module can be found at: