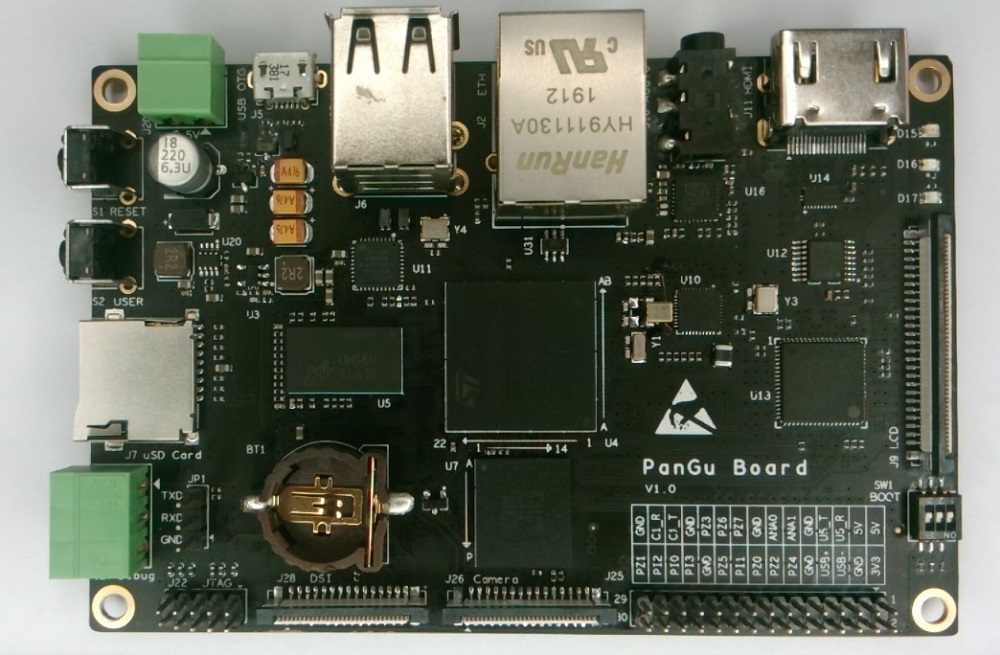 i2SOM has launched a PanGu SBC based on STMicroelectronics (ST) STM32MP1 series SoC. The PanGu SBC list support for both Yocto and Debian and offers 1GB DRAM, HDMI, Ethernet, LCD, USB OTG, USB Host, TF Card, audio and other interfaces. The PanGu Board utilizes the STM32MP157AAA3 version of the SoC series. This version integrates a 650MHz Arm dual-core Cortex-A7 core and 209MHz Cortex-M4 coprocessor with an FPU, MPU, and DSP instructions.

The PanGu Board integrates HDMI, 1000Mbps Ethernet, LCD, USB OTG, USB Host, microSD, audio, with a host of other interfaces. The board is designed for applications as well as industrial systems, the IoT, portable consumer electronics, automotive electronics, and others. PanGu supporting both Yocto Linux and also the Jessie version of Debian gives users the option of choosing which OS to run.

There are two boards based on the STM32MP1 SoC we have seen this year, the Avenger96 SBC, a sandwich-style 96Boards CE Extended SBC released by Arrow and the SOM-STM32MP157, a tiny COM module launched by Kontron. Memory features for the PanGu include 16-bit DDR3L DRAM up to 1GB, 8-bit eMMC flash, Quad-SPI NOR flash, and support for microSD. For the display feature, the board enables a parallel RGB LCD interface with resolution support for up to WXGA (1366×768), a MIPI DSI interface. It also supports resistive and capacitive touch panel, and an HDMI Type A connector with audio output included.

The PanGu is equipped with 2x USB host ports and a micro-USB 2.0 OTG port. An 8-bit parallel camera interface is available for camera support. The PanGu board displays 1x red LED for system power and 2x blue LEDs for users. Available also is a 3.5mm stereo headphone jack and support for microphone input. Debugging access is available via the board’s JTAG/SWD and TTL debug ports. The PanGu power options include a 5V DC and support USB or 3.81mm terminal block supplies, as well as Support for CR1225 batteries for backup, is available. The PanGu board can be expanded through an 80-pin board-to-board connector.

The PanGu is available for purchase from Taobao for the currently listed price on RMB 319 RMB (approximately $46.38 US). The price has apparently crashed significantly since June 25. The price as at last week was 499 RMB (approx. $72.50 US).