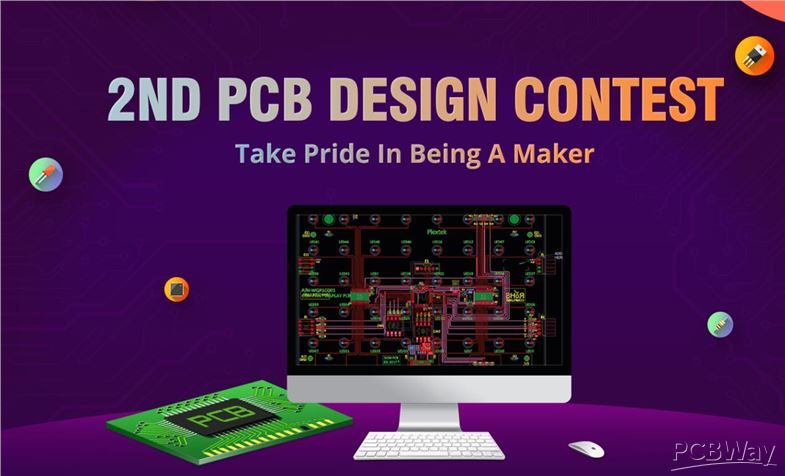 Late of last year, PCBWay, a leading manufacturer in PCB and PCBA, announced the first of it’s kind PCB design contest in close partnership with SpainLabs (Well-known Spanish electronic forum) with amazing prices and even cash prices was offered to some of the best PCB and Product design from several competitors which all ended up in a huge success. In less than 3 months since the end of the first design contest, PCBWay is launching another one design contest for the 2nd edition of the competition.

Everyone has been waiting on their toes for the commencement of the 2nd Edition of PCBWay design contest. As of June 11, information was shared on the competition’s official website that the contest would start soon. This means it is time to get ready with some awesome PCB designs and win fabulous prizes.

This is the second edition of the competition, and the primary goal is to discover hidden gems in the electronics engineering field. The competition is being organized by PCBWay, SpainLabs, YoREPARO, and lastly ATMakers. They are collaborating to create an avenue for talented electronic engineers to generate revenue.

This is the award for the best design in the competition.

THE MOST POPULAR DESIGN AWARD

This is the award for the most popular design and not necessarily the best design in the competition.

This is a special prize for a person that excels in assistive technology. The price awards a lavishing $1000 in cash + $100 in coupons+ 10000 PCBWay Beans+ Certificate of Awards & Honors.

Unlike the last contest which was the maiden edition, professionals such as Mitch Athman, Bill Binko, Carlos Navas and the likes have been contacted and will be judges for the competition. These are experts plus several others that have been gotten so that there will be a fair selection process.

There is no limit to the PCB design’s size, layers, theme, or even the quantity of entries as compared to some limits imposed in the first edition. This means you can enter as many times as you want to and there are no restrictions about what you will be entering the competition. Size does not matter. Deadline for submission is the 12th of December, and if you’re interested, all you have to do is to click here to get to the official website and get started.

“PCBWay Beans” can be used to redeem gifts. Its property comes from “PCBWay Points.” But when you redeem the gift, it will subtract the corresponding value.

How To Get Started With The Competition

More information about the contest can be found on official contest page here.