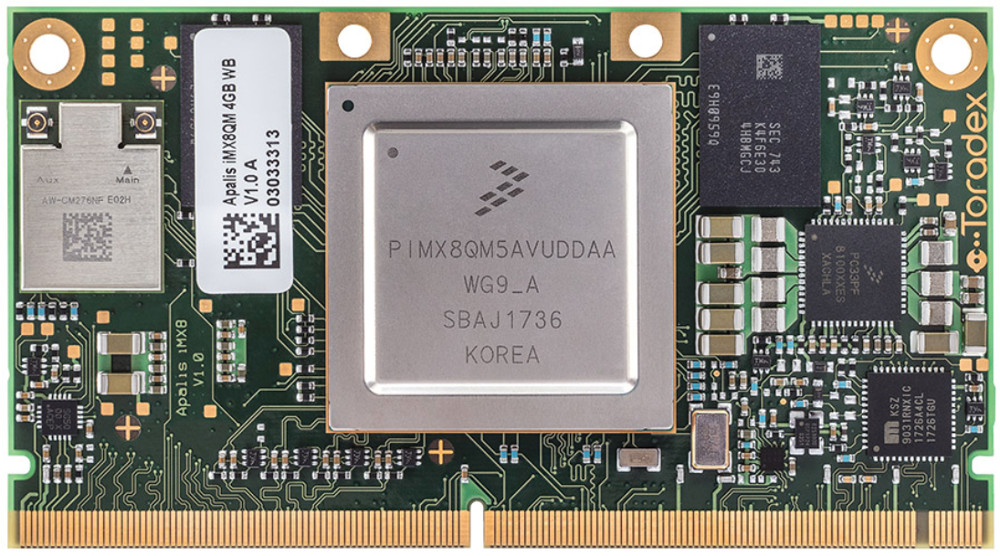 Toradex, a Swiss embedded technology firm announced the world’s first embedded board built on NXP’s i.MX8 QuadMax back in Mar. 2017. Recently, Toradex has opened early access for selected customers to the SODIMM-style Apalis iMX8 module. A sign-up form offers the potential for newcomers to get an early look.

This new Linux powered, wireless-enabled Apalis iMX8 uses the QuadMax, which is the most powerful i.MX8 Quad model. Like the Quad and QuadPlus, it offers 4x 1.26GHz Cortex-A53 cores, 2x 266MHz Cortex-M4F cores for real-time processing, one or two Vivante GC7000LiteXS/VX GPUs, and a HIFI4 DSP. The QuadPlus adds a 1.6GHz Cortex-A72 core, and the Apalis i.MX8’s QuadMax provides two -A72 cores. The module supports up to 4 GB LPDDR4 RAM.

The Cortex-A cores run a “Yocto Project“ based Linux distribution provided via a BSP (Board Support Package). The M4F MCU cores run FreeRTOS which is also provided by the same BSP. With its dual GPUs, the Apalis iMX8 supports multiple-screen automotive installations. However, the module is designed for a broader range of cutting-edge computer vision systems, as well as signal processing and HMI applications. The module offers onboard, dual-band 802.11ac WiFi, and the dual-mode Bluetooth module is said to be Bluetooth 5.0 ready.

The module is equipped with 2x PCIe Gen 3 interfaces, 3x CAN, 4x SPI, 7x UART, and 8x analog inputs. The I2C count has increased to 7x, and the PWM count has advanced to 6x. You also get an IrDA connection, up to 133 GPIOs, and 8- and 4-bit SDIO/SD/MMC interfaces. The Apalis iMX8’s SATA interface has moved from SATA II to III. As before, there’s a GbE (Gigabit Ethernet) controller with a second RGMII. You get a USB 3.0 host interface, and 3x USB 2.0 host ports, one of which is OTG.

The module provides a quad-lane MIPI-DSI interface and offers an HDMI 2.0a interface for up to 4K UHD 2160p. There’s also a single/dual-channel LVDS interface with up to 1920 x 1200 x 24bpp resolution and 4-wire resistive touch. One new feature is a choice of DisplayPort 1.3 or eDP 1.4.  An optional 5MP camera module is supported by dual quad-lane MIPI-CSI interfaces. Analog audio I/O includes a stereo line in, mono mic in, and stereo headphone out interfaces.

The Apalis i.MX8 offers the same two carrier board options provided for the Apalis TK1: a 250 x 250mm Apalis Evaluation Board, as well as a less feature-rich, 125 x 90mm Ixora Carrier Board. The boards have real-time clocks and 7-27V DC input support. The Apalis i.MX8 appears to be ready to ship soon to qualified early access providers. You can sign up to apply for early access on the Apalis i.MX8 product page.