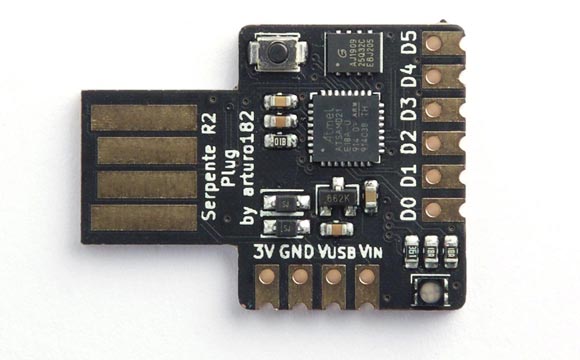 A version of the Lisp programming language for Serpente ARM board. This is a version of uLisp 3.0 designed to work with the tiny Arturo182 Serpente boards:

It’s a slightly modified of the ARM version of uLisp; at some stage I may incorporate it into the standard ARM version. For more information about uLisp see: uLisp – Lisp for microcontrollers.

I’ve also created an Arduino Core that is needed by uLisp. You could also use this on its own to program the Serpente boards in C from the Arduino IDE.

For full information about the Serpente boards see: Serpente Documentation.

To buy the boards see: Serpente – A Tiny CircuitPython Prototyping Board on Tindie.

These boards are based on the Microchip ATSAMD21E, an ARM Cortex M0+ CPU with a 48 MHz clock. There are three variants which differ only in the type of USB connector provided. Each board provides 256 KB flash and 32 KB RAM, and also include a separate 4 MB SPI DataFlash chip which is used by uLisp to allow you to save the Lisp image using (save-image).