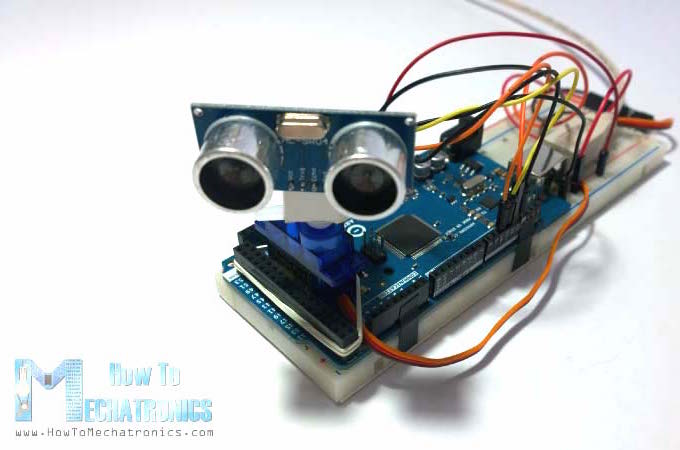 A radar system uses high frequency radio waves for object detection. A high-power RF pulse is transmitted into space and its echo reflected off from an obstacle is recorded. By computing the time elapsed between the transmitted and reflected pulses, and knowing that the electromagnetic wave propagates at a constant speed of light, the radar computes the distance of the obstacle. Because the speed of radio waves is so high, the time lapse is usually very small, and therefore requires sophisticated electronics for range detection. The time lapse would be easier to detect if the waves with lower propagation speeds were used, for instance, sound waves that travel at a much slower speed (~ 340m/sec in air) than light.

Dejan Nedelkovski from How To Mechatronics illustrates the principle of radar using ultrasonic sound waves. In his project, he used an HC-SR04 ultrasonic ranging sensor module for measuring distance to an object, similar to the echolocation technique used by mammals like dolphins and bats. The HC-SR04 is a fully-integrated module with onboard transmitter, receiver, and control circuit. It can measure an object distance ranging from 2cm – 400cm with an accuracy of 3mm. The HC-SR04 sensor is mounted on a servo motor for scanning the surrounding. An Arduino board is used to control the angular position of the servo during scans. The echo data output from the ranging sensor is received by Arduino and is sent to a computer along with the angular positions along the scan through a USB port for post processing.

On the computer side, a PC application was developed using the Processing platform to retrieve the radar echo data, combine it with the angular position data, and visualize the radar signature on the screen. Check out the following video to see this radar in action.