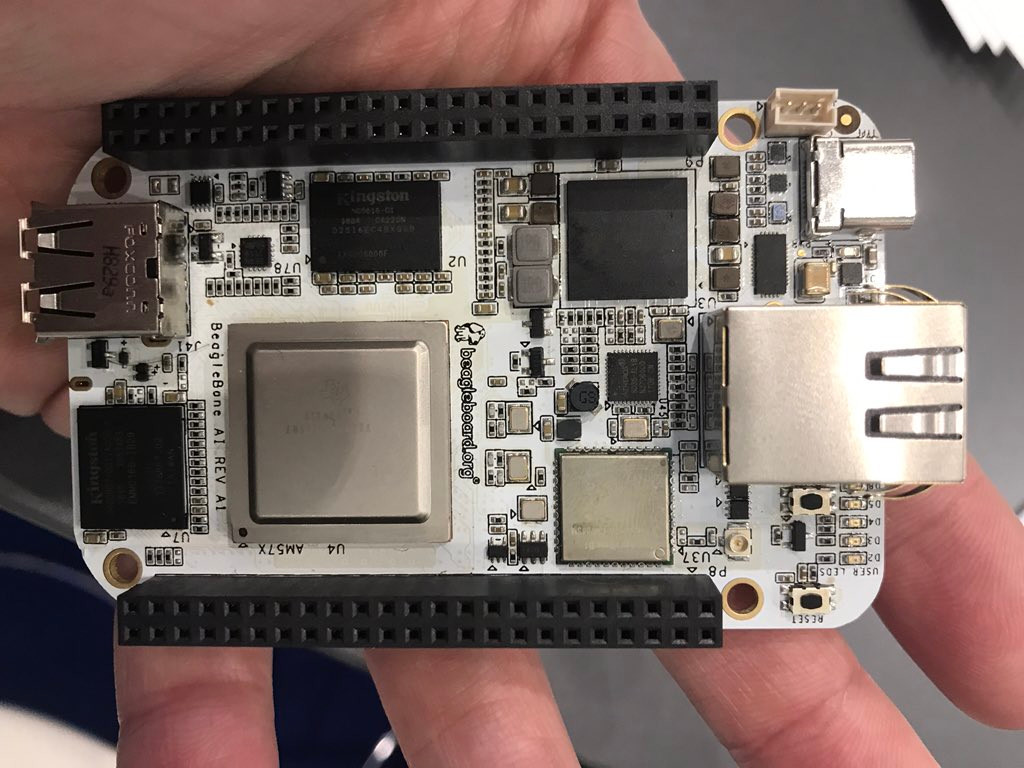 BeagleBoard claims that the calculations for computer-vision models on the AM5729 run at 8x times the performance per watt in comparison to the EVE-less AM5728. The EVE cores were designed by TI for automotive vision applications via a Vision AcclerationPac architecture.  BeagleBoard does not provide any clock rate for the AM5729’s dual -A15 cores, but judging from the AM5728 which clocks at 1.5GHz, the AM5729 might clock around 1.5GHz also. The SoC also features a PowerVR SGX544 3D GPU and Vivante GC320 Core 2D accelerator.

Built on the proven BeagleBoard.org open source Linux approach, BeagleBone AI fills the gap between small SBCs and more powerful industrial computers. Based on the Texas Instruments AM5729, developers have access to the powerful SoC with the ease of BeagleBone Black header and mechanical compatibility. BeagleBone AI makes it easy to explore how artificial intelligence (AI) can be used in everyday life via the TI C66x digital-signal-processor (DSP) cores and embedded-vision-engine (EVE) cores supported through an optimized TIDL machine learning OpenCL API with pre-installed tools. Focused on everyday automation in industrial, commercial and home applications.

Just like the other BeagleBone SBC variants, the AM5729 has 4x programmable, real-time PRU cores. The AI SBC’s RAM is increased to 1GB and the eMMC storage is increased to 16GB compared to the BB Black. The board offers GbE and high-speed WiFi. It is also further equipped with a USB Type-A port and a USB Type-C port, which enables power and superspeed dual-role controller. According to BeagleBoard.org. The BeagleBone AI will offer BeagleBone Black header and mechanical compatibility, as well as a “zero-download out-of-box software experience.”

The SBC will likely continue to run Linux and will ship with open specifications. BeagleBoard.org. Says the SBC is aimed at “everyday automation in industrial, commercial and home applications.” Information on pricing and availability are unknown for the BeagleBone AI, but you can sign up for notifications at the BeagleBone AI product page.