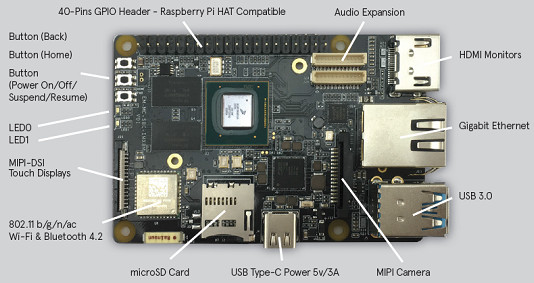 We have written about a host of i.MX8M based SBCs, like Seco’s SBC-C20, Boundary Devices’ Nitrogen8M, Arrow’s 96Boards CE Extended Thor96, SolidRun’s HummingBoard Pulse, and the armStone MX8M from F&S. However, we have come across another i.MX8M based SBC. Embest has launched a $60 “MaaxBoard” SBC which runs Yocto Linux or Android 9.0 on a quad -A53 i.MX8M, and features 2GB to 4GB DDR4, 4K playback, and a Raspberry Pi-like layout and 40-pin header.

We realize that often times, most individually priced SBCs under $100 ship with open hardware specs and community support features, but it appears to be a different case with the MaaxBoard. However, Embest offers hardware and software documentation, and also an image and source code for a Yocto Project based distribution based on Linux 4.14.78. It also offers support for Android 9.0. It’s uncertain if the lone $60 package offers you the i.MX8M Dual, QuadLite, or Quad model. The 1.5GHz Cortex-A53 i.MX8M also includes a Cortex-M4F real-time core and a 4K-ready Vivante GC7000Lite/GC7000VLX GPU. Embest clocks the SoC at 1.4GHz. 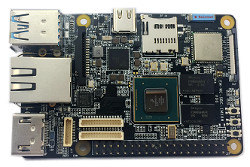 The $60 price seems to include 2GB RAM and an empty eMMC socket. The product page mentions “up to” 2GB DDR4 SDRAM and “0 ~ 64GB” eMMC, but Embest’s SlideShare preview presentation from June lists a default of 2GB RAM but no specific eMMC listing. The MaaxBoard is also equipped with a MicroSD slot, an 802.11ac/Bluetooth 4.x module, and a GbE port. Available also is 2x USB 3.0 ports, a power-only USB Type-C port, MIPI-DSI and CSI connectors, and some high-end SPDIF and SAI digital audio interfaces.

By the end of the year, MaaxBoard will be joined by a very similar MaaXBoard Mini SBC equipped with NXP’s i.MX8M Mini SoC, that should be even more efficient thanks to the 14nm processor, but the price has not been announced yet. Embest has already posted a teaser page with some photos but no details. The image indicates that the HDMI port has been removed and replaced with one of the dual USB 3.0 ports. The i.MX8M Mini offers up to four faster, 1.8GHz Cortex-A53 cores with lower power consumption but is limited to HD video.

The board ships in an anti-static bag with a generic safety leaflet. That means you need to source your own USB-C power supply and cables.

The MaaXBoard is available now for $60, presumably with 2GB DDR4 and WiFi/BT, and comes with an empty eMMC socket. The unpriced MaaXBoard Mini will ship later this year. More information can be found in the Embest (Avnet Manufacturing Services) MaaXBoard announcement, MaaXBoard shopping page, and Dropbox wiki, as well as the MaaXBoard Mini teaser page.

Specifications listed for the MaaxBoard include:

The MaaXBoard is available for $60, presumably with 2GB DDR4 and WiFi/BT, but with an empty eMMC socket. The unpriced MaaXBoard Mini will ship later this year. More information may be found in the Embest (Avnet Manufacturing Services) MaaXBoard announcement, MaaXBoard shopping page and Dropbox wiki, as well as the MaaXBoard Mini teaser page.