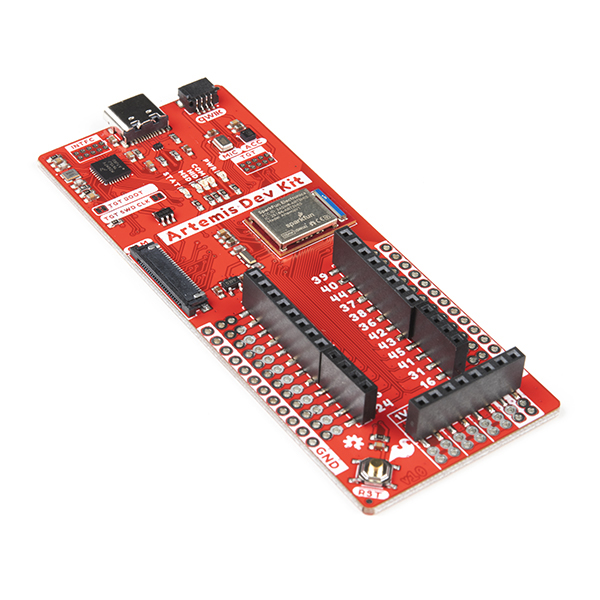 At this point, you may have heard from the Artemis module from Sparkfun, which revolved around the idea of bridging the gap between hobbyists and consumer products, packing all the power that is expected from a modern microcontroller into a small module but keeping in mind the easiness to use and the capability of being ready to the mass-market. Now, with the Artemis Development Kit, you can expect a fully-fledged kit that goes even further than the ones available for this module, allowing access to more software development features than its predecessors. Pretty cool, right?

As a refresher, the Artemis module that brings these kits to life is the world’s first open-source, US manufactured BLE module with FCC, IC, and CE certifications. It runs an Apollo3 ARM Cortex-M4F MCU, supports BLE 5.0, with power as low as 6uA per MHz. This new addition to the Artemis family also includes 24 Breakout I/O pins for your peripherals, a 3-axis accelerometer, a PDM microphone, and optionally a camera, so that you can develop your own computer vision applications on it. It even comes with a useful cheat sheet on the back, detailing all the pin functionalities, so you will not need to go back and forth between your datasheet and your IDE, nice touch!

Regarding the specs in further detail:

You have flexibility when it comes to programming the kit: as it targets both hobbyists and experienced users who want to take the leap and create a professional product, it allows for the Arduino, but also reccomends some more advanced IDE’s, such as the MBED OS and the AmbiqSDK. The board also counts with an updated USB interface from NXP, providing three different modes: Mass Storage Device (MSD), for drag and drop programming, Human Interface Device (HID), used as the debugging interface to the Artemis module and communication port (COM), providing serial UART communication between the module and the computer connected via USB.

As mentioned by the Sparkfun developers and throughout this article, this board is geared towards the advanced developer, who wants to take a concept all the way into final production. Do you think it can be useful for your ideas? What projects do you see it shining on?