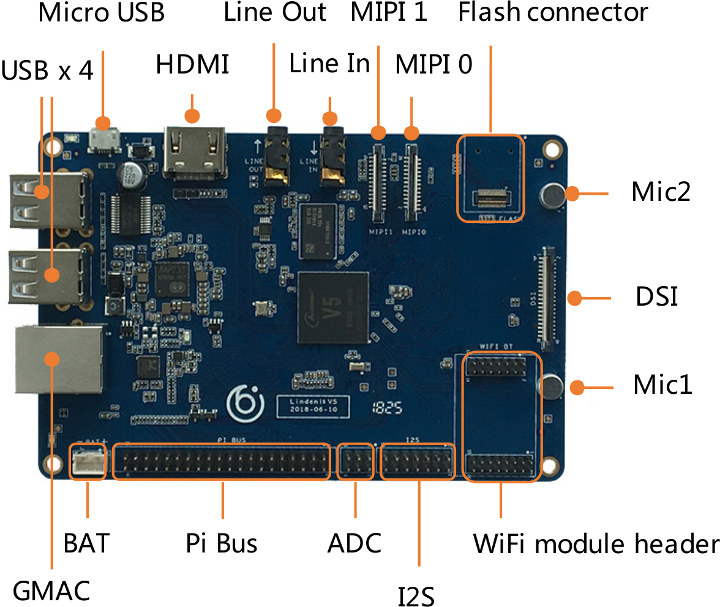 Compared to other Allwinner H3 boards and other various NanoPi and Orange Pi models, the price is quite high and thinking of the modest features such as 1GB RAM, and a lack of standard wireless or eMMC, it seems the high price comes from its camera and vision analytics capability.

The Embedded Vision Engine comes with a 360p detection resolution, has a minimum single-image detection of 64 x 64 pixel and a maximum 4K resolution input and internal scaling which supports region detection.It is also designed for rigid target detection like the human face, head, shoulders.

While the Computer Vision Engine is designed to detect moving targets such as cars, pedestrians, animals and supports a minimum 8 x 8 pixel for small object detection and a maximum image of 720p and has a D1 rate of up to 10fps. The Perimeter Intruder detection supports maximum warning region numbers of 32 and combining calibration algorithm and it can classify people and cars. It also provides support for warning line single/dual direction detection.

The board runs Linux 4.4 as well as Linbian OS based on Debian 9 stack which supports its AIE engine with compute library, Tensorflow, OpenCV and GStreamer with hardware acceleration. It also supports various applications such as panoramic, 3D/VR, as well as other smart cameras such as the smart IPC, VLPR, car DVR and various facial recognition applications.

The Lindenis V5 also has an RPi compatible 40-pin header and comes with 4 USB 2.0 ports, onboard headers for ADC and 12S, a micro USB port for power input (5V) and a 3.7V li-lion battery connector which makes it quite larger than the Raspberry Pi.

The SBC is available for $73 in China.