Skip to content
HomeBlog Gameduino 3x Dazzler is an Arduino shield with a GPU, FPGA and an HDMI Port onboard. 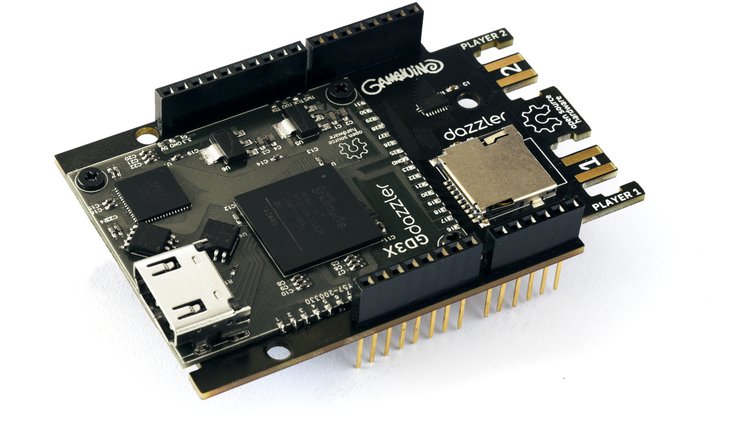 Gameduino 3x Dazzler is an Arduino shield with a GPU, FPGA and an HDMI Port onboard.

Following the general success of the first version of the Gameduino, an Arduino Shield which allowed users to connect devices like VGA monitors and speakers to the Arduino, to create high-quality sprite/tile-based video games,  James Bowman‘s excamera released improved versions of the device with built-in screens and graphics processors which were widely accepted within the open-source gaming communities. Spurred by these successes and the desire to provide users with a shield that reflects current technology realities, excamera recently announced the launch of a new version of the shield; the Gameduino 3x Dazzler.

A totally open-source, and hackable audiovisual platform, the Dazzler shield comprises of a BT815 GPU, a Xilinx Spartan-6 FPGA, an HDMI port, and two Wii Classic ports that give users the experience of a plug-and-play game console.

The combination of the BT815 GPU and the Xilinx Spartan-6 FPGA provided all that was needed to achieve the 1280×720 (full 720p) video (and sound) output over HDMI. In addition to this, the shield features a memory card slot which could house memory card on which game assets like sounds, images and sprites could be stored.

Some highlight features of the dazzler include:

According to James Bowman,

“the Dazzler is ideal for game designers using Arduino or CircuitPython, makers who want rich, responsive data and text visualizations, and perfectionists who want excellent video output for their Arduino project”.

The dazzler is totally open source, so all project resources including schematics and firmware will be made available.

The project is currently being prepped for a crowdfunding campaign on Crowdsupply. You can sign up on the project page to receive updates and be notified when the project launches.

Hii
Thanks a lot for sharing this awesome info . i personally like all the point about the shield along with its features ..keep it up with such useful contents