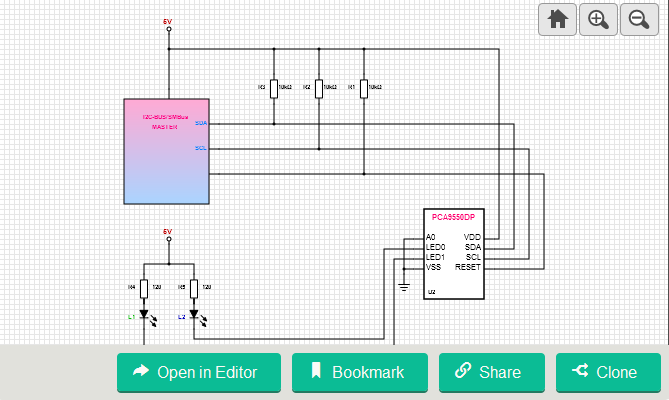 This project introduces the use of PCA9550, an LED driver that causes the 2 LEDs to ON/OFF or in a flashing state at programmable rate. It has 2 selectable, fully programmable blink rates between 0.172Hz and 44Hz or 5.82 seconds and 0.023 second respectively. Its internal oscillator does not require external components and I2c bus interface logic is compatible with SMBus.

The PCA9550 LED blinker drives LEDs in I2C-bus and SMBus applications where it is necessary to limit bus traffic or free up the I2C Master’s (MCU, MPU, DSP chip set, etc.) timer. The uniqueness of this device is the internal oscillator with two programmable blink rates. This LED blinker requires only the initial set-up command to program BLINK RATE 1 and BLINK RATE 2 (i.e., the frequency and duty cycle). From then on, only one command from the bus master is required to turn each individual open-drain output ON, OFF, or to cycle at BLINK RATE 1 or BLINK RATE 2. Maximum output sink current is 25 mA per bit and 50 mA per package. Any bits not used for controlling the LEDs can be used for General Purpose I/O (GPIO) expansion. The active LOW hardware reset pin (RESET) and Power-On Reset (POR) initializes the register to their default state, all zeroes, causing the bits to be set HIGH (LED OFF). One hardware address pin on the PCA9550 allows two devices to operate on the same bus.