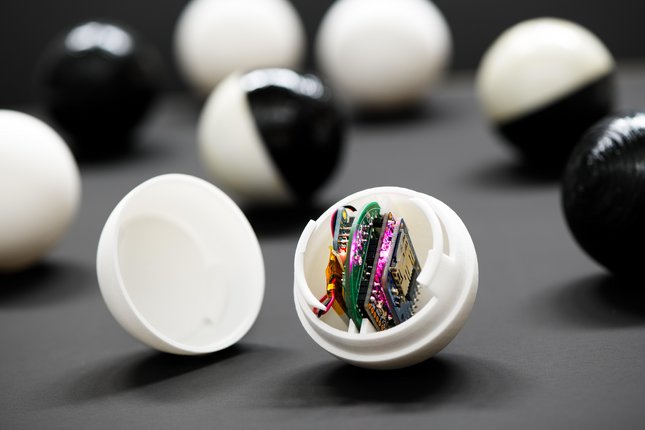 Smart Marbles and AI to detect flaws in pipelines

A small team of researchers led by Peter Baltus, professor of microelectronics at the department of Electrical Engineering at Eindhoven Institute of Technology, the Netherlands, has developed small circuit boards equipped with sensors that can easily fit into a small golf-sized ball. While moving inside a pipeline, these swarm of smart marbles or balls can detect any obstacles, damages or leaks that are present in the pipeline network.

When operating in an unusually difficult environment inside a pipeline, the researchers decided to use the power of AI (Artificial Intelligence). It enabled the marbles to evolve its own ability to adapt to the current situation inside the pipeline. This process was simulated accurately with software. After retrieving the realtime pipeline data, an initial model of the pipeline was developed on a computer. A programmed algorithm then simulated the environment which the marbles had to deal with. It took about 500 simulation cycles to develop an optimal configuration that almost matched the inside of the pipeline system. This simulation software was then put into the circuits within the marbles. Then the marbles were finally released in the same real pipeline system yielding significantly good results.

When you are unfamiliar with an environment, you also can’t know which features a sensor is going to need in order to explore that environment,” said Peter Baltus. “I draw a parallel with evolution because the process is so unpredictable. We don’t have a solution, so we let an algorithm do it. This algorithm mixes the most successful balls and works towards an optimum. We don’t know the results of that simulation process beforehand. Perhaps the algorithm decides to give each marble its own task, which could lead to location marbles and marbles that detect leakages. The fact that our first evolution experiment shows that the principle works are actually unbelievable, and they even evolve in the right direction as well.

The researchers came up with the idea of using low energy reversed magnetic fields with low frequency to communicate between the balls and the host. Though its range was short for this mode, the objective of exact location detection corresponding to the relative positions of the marbles was much accurate.

At first, the marbles were intended to flow smoothly with the current inside the pipeline to reduce power consumption. But, in the event of it getting stuck inside a damaged pipeline, there was no way of returning it to normal operation. And that is why the marbles were later fitted with an emergency system. When a marble gets stuck, it uses its last bit of energy to send out a distress signal to the other balls nearby. In doing so, the marble also sends all the information is collected, so that no vital information is lost.

As for the future of this new technology Baltus said, “We want to make the marbles even smaller, so that we can use them in healthcare, for example. Imagine that they’re small enough to flow through your blood vessels. That would bring entirely new possibilities to the detection of obstruction.”

At the moment, the marbles are only being used to detect leaks. But in the future, Baltus and his team look forward to developing a resin that fixes the leaks right away. More information can be found on this project page.