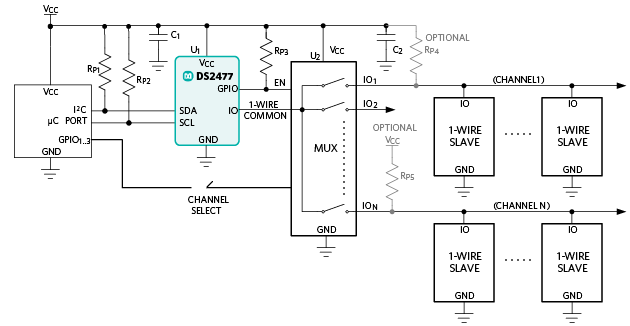 How to multiplex a 1-Wire master into numerous channels

This is an app note from Maxim Integrated on using only one 1-wire master on multiple 1-wire channels.

1-Wire® networks are originally designed for communication with a single 1-Wire master and numerous 1-Wire slaves on a single 1-Wire bus. Preferably, a linear topology, which contains insignificant stubs, is best for a 1-Wire network. However, a star topology, which contains long stubs, is often unavoidable, and makes it more difficult to determine the effective limitations. A method to eliminate these difficulties is to break up a star topology into numerous channels by using an analog multiplexer (mux). Advantages of using numerous channels include accelerating individual 1-Wire slave access time, improving network robustness, and mixing overdrive-only slaves with standard/overdrive slaves on different channels. These advantages can be gained while still having a single 1-Wire master.

How to multiplex a 1-Wire master into numerous channels – [Link]