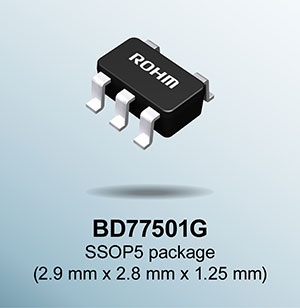 The proliferation of IoT in recent years has led to a significant increase in the number of electronic components used for advanced control in a variety of automotive and industrial applications. Among these, op amps are used and are capable of quickly amplifying minute sensor signals in anomaly detection systems that provide safety. However, board design can become problematic as conventional high-speed op amps are susceptible to oscillation due to capacitive loads (i.e. from wiring). At the same time, degradation of the noise environment resulting from increased electrification and mounting density is making it extremely difficult to implement noise design for small-signal devices. 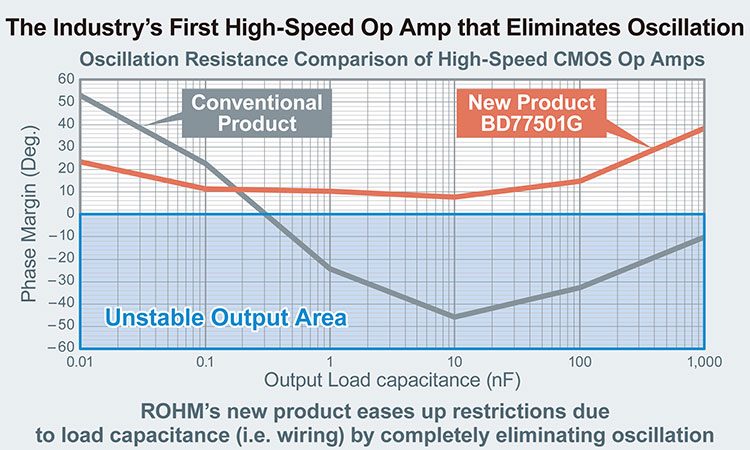 In response, ROHM developed the EMARMOUR™ series of op amps and comparators*1 that have been well-received in the automotive and industrial markets due to its superior noise immunity that allows users to reduce design resources to address noise issues. This time, ROHM has expanded the lineup by adding a new high-speed type ideal for anomaly detection that prevents oscillation over the entire load capacitance range.

The BD77501G is the industry’s first op amp that not only supports high-speed amplification (high slew rate: 10V/us) required in anomaly detection and other systems, but also completely eliminates oscillation caused by load capacitance (i.e. wiring). Unlike conventional high-speed op amps that can become unstable due to load-capacitance-induced oscillation, ROHM’s new product ensures stable operation with no unwanted oscillation. In addition, whereas the output voltage for conventional products can fluctuate by ±200mV or more across the entire noise frequency band, the BD77501G provides unprecedented EMI Immunity*2 (noise immunity) that limits variation to less than ±20mV (1/10th). This enables high-speed signal amplification without being affected by load capacitance or external noise when installed in the latter stages of sensor applications, improving reliability and reducing design time.

ROHM is committed to expand the lineup of this product to automotive market in the near future.

I love how the electronic industry went this far. Cheers for more.