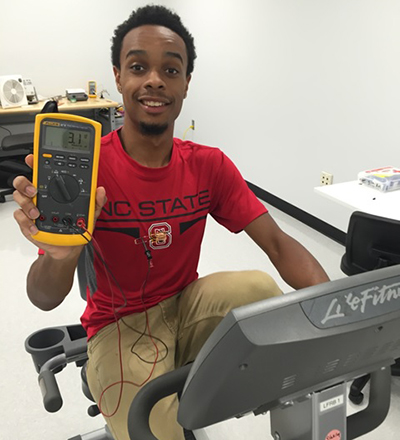 Powering wearable technologies using thermoelectric generators (TEGs) is becoming more efficient. An undergraduate student in North Carolina University, Haywood Hunter, is producing a lightweight and an efficient wearable thermoelectric generator. It generates electricity by making use of the temperature differential between the body and the ambient air.This converter produces 20 times more electricity than other technologies (20 µwatts) and it doesn’t use any heat sink, making it lighter and much more comfortable.

The design begins with a layer of thermally conductive material that rests on the skin and spreads out the heat. The conductive material is topped with a polymer layer that prevents the heat from dissipating through to the outside air. This forces the body heat to pass through a centrally-located TEG that is one cm2. Heat that is not converted into electricity passes through the TEG into an outer layer of thermally conductive material, which rapidly dissipates. The entire system is only 2 millimeters, and flexible. Some limitations to size can be solved by choosing right power settings for different sizes.

Even though the wrist is the best place to use heat-electricity converters because the skin temperature is higher, the irregular contour of the wrist limits the surface area of contact between the TEG band and the skin. To solve this issue, it was recognized that the upper arm was the optimal location for heat harvesting. Meanwhile, another experiment showed that wearing the band on the chest limited air flow and heat dissipation, since the chest is normally covered by a shirt.The researchers found that the T-shirt TEGs were still capable of generating 6 µW/cm2 – or as much as 16 µW/cm2 if a person is running. It was realized then that T-shirts are just not as efficient as the upper arm bands.

The work was funded by National Science Foundation (NSF) and the research was done in the Nanosystems Engineering Research Center for Advanced Self-Powered Systems of Integrated Sensors and Technologies (ASSIST) at North Carolina State. This center’s mission is to create wearable, self-powered, health and environmental monitoring systems, such as devices that track heart health or monitor physical and environmental variables to predict and prevent asthma attacks.

Further details can be reached at the university website and the project’s paper.