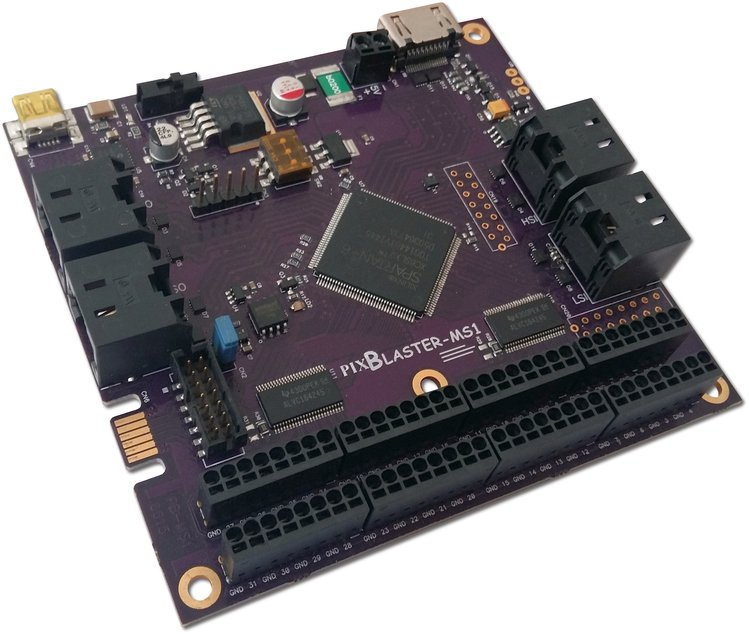 Combine LED strips to create a huge display that acts as a regular video monitor. All this with the FPGA based RGB LED controller that is capable of controlling up to 16,384 WS2812 based RGB LEDs at 60 FPS. Not only that, but you can daisy chain multiple controllers which can control up to hundreds of thousands of LEDs.

Due to their high cost and complexity, huge, shiny, beautiful video displays with thousands of LEDs have always been out of reach of enthusiasts and small business owners. Pixblasters MS1 changes all of that.

Pixblasters MS1 enables DIY enthusiasts and signage professionals, even those with minimal technical skills, to turn a bunch of addressable RGB LED strips into immense video LED displays. This FPGA-based LED controller enables new levels of professional-grade digital signage that cannot be attained by standard LED modules. The LED strips can be curved and glued to different surfaces to form giant yet economically viable video installations that can span entire buildings.

The project is live on Crowd Supply and basic pledge for Pixblasters Go costs $219.

the first photo is of Adafruit’s Neopixels, which are WS2812.nnThis is significant because WS2811’s are driven by 12VDC, and have a data input of 0 and 12VDC.