Arduino has launched a second version of their Arduino MKR family which features a range of sensors. The Arduino MKR IoT Carrier Rev2 is designed for Internet of Things projects. It provides a range of connectivity options, including Wi-Fi, cellular, and LoRa, as well as a variety of sensors like humidity, temperature, and pressure sensor. The Arduino MKR IoT Carrier Rev2 uses ST LSM6DSOXTR which is a 6-axis inertial measurement unit(IMU). The LSM6DSOX is a replacement for LSM6DS3 from the previous version.

The board also has a Bosch BME688 which is the first gas sensor with AI and integrated high-linearity and high-accuracy pressure, humidity, and temperature sensor. It can detect gases like Volatile Organic Compounds (VOCs), volatile sulfur compounds (VSCs), and other gases such as carbon monoxide and hydrogen in the part per billion (ppb) range. 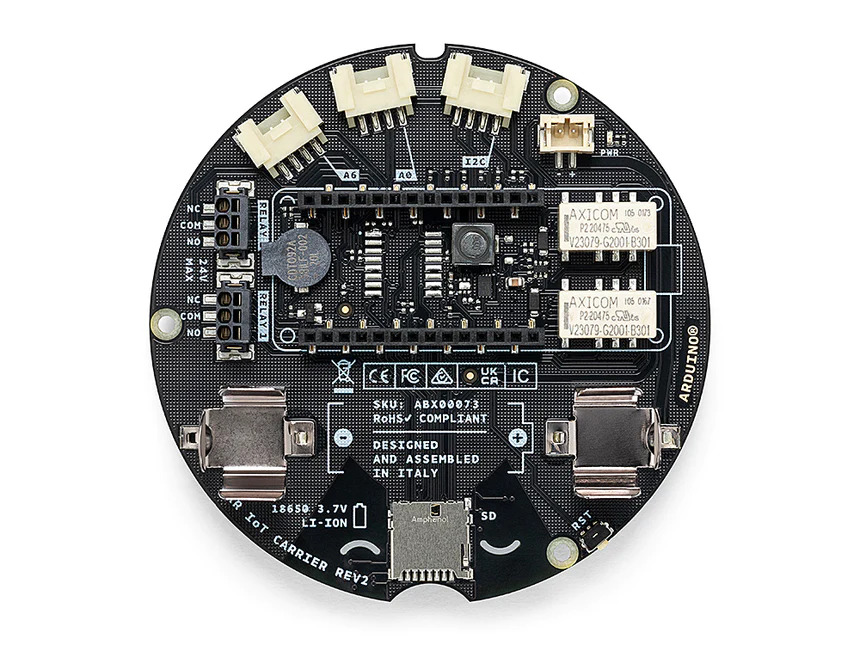 The Arduino MKR IoT Carrier Rev2 is compatible with Arduino MKR family boards. The board features Wi-Fi, Narrowband (NB-IoT) or 3G cellular connectivity. Low-power design makes NB-IoT devices suitable for battery-powered devices that need to last for long periods of time. NB-IoT networks have a wide coverage area and can penetrate deep into buildings, making them suitable for indoor use.

Users can program the board using Arduino IDE and use the Arduino_MKRIoTCarrier library for the MKR family. The library will allow users to control the IoT MKR carrier and all components included in exploring IoT kit.

The Arduino MKR IoT Carrier Rev 2 retails at $63.60 or 60 Euro on the official Arduino store. For more information visit the product page.