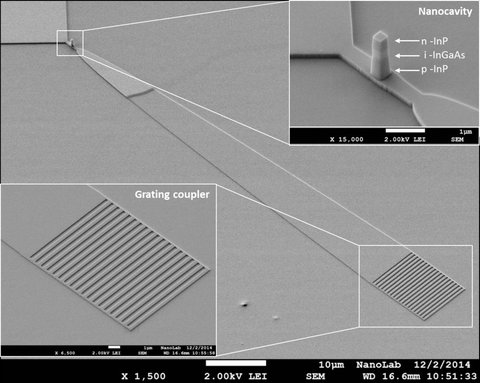 For the exponentially growing data traffic worldwide, the data connections within and between microchips are increasingly becoming a bottleneck. Optical connections are an obvious successor, but that requires an adequate nano-sized light source – and this has now been found. Researchers from the TU Eindhoven have succeeded in making a nano-LED with an efficiency 1000 times greater than its predecessors, and which can operate at a data rate of gigabits per second.

The data connections between microchips (the so-called interconnects) are responsible for the majority of the energy consumption of these chips – one of the reasons why there is a worldwide search for optical (photonic) interconnects. The problem here is the light source: it has to be small enough to fit in the microscopic structure of the microchips. The output power and efficiency also have to be high enough – and especially the latter was a challenge.

The LED that was developed at the TU Eindhoven has a size of only a few hundred nanometers and has a integrated light channel (wave guide) for transporting the light signal. The increase in the efficiency of this new LED was mostly due to the quality of the coupling of the LED to that light channel.

The research is described in the paper ‘Waveguide-coupled nanopillar metal-cavity light-emitting diodes on silicon’ that appeared in Nature Communications; it can be viewed here.
Source: Elektor