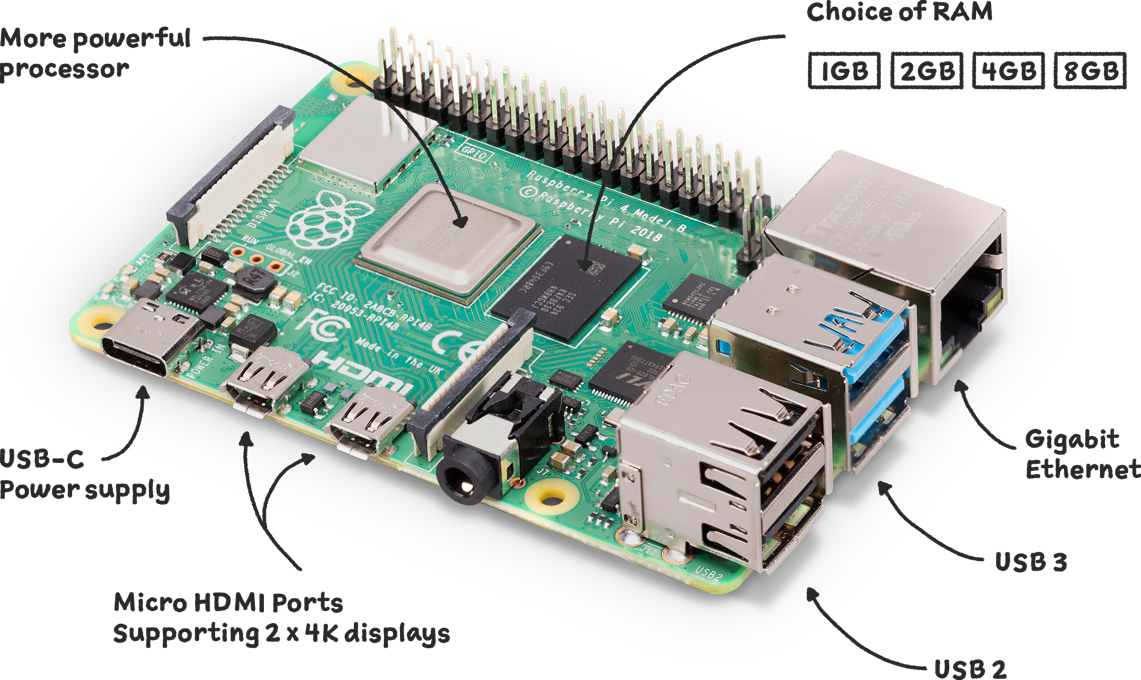 Engineers and makers can use and test new technologies for IoT projects quickly using development boards. The best SBCs are those that can be used for any project, including Internet of Things (IoT) projects. This means that a powerful board with the fastest technology might not be the best choice for remote monitoring. On the other hand, a low-power platform with good sensors is more than enough to handle the load. Still, too much performance has never slowed down project development, and “future-proofing” is a great reason to go overboard with the latest hardware, no matter what the application. This roundup will look at the best development boards for Internet of Things (IoT) applications, or any applications, that have come out in the last year or two and are used by engineers and makers alike.

The Raspberry Pi, 4 Model B, is still the flagship board of the Raspberry Pi Foundation. It has been the central component of a wide variety of applications, ranging from robotics to automation systems, and it continues to be the case today. The Raspberry Pi has established itself as the board that most people think of first in terms of the flexibility of projects, the price, and the performance. The Raspberry Pi, 4 Model B, includes a system-on-a-chip (SoC) manufactured by Broadcom with four 1.5-GHz Cortex-A72 cores, a Broadcom VideoCore VI graphics processing unit, and up to 8 gigabytes of DDR4 RAM. There is a large selection of available connectivity choices, some of which are Gigabit Ethernet, Bluetooth 5.0, Bluetooth Low Energy, and dual-band 802.11ac/b/g/n Wi-Fi. Ports and connectors include the typical 40-pin GPIO header, two micro-HDMI 2.0 ports, two USB 3.0 ports, two USB 2.0 ports, a 3.5-mm audio/video jack, CSI, and DSI. Additionally, there are two USB 3.0 ports. Because of its adaptability and user-friendliness, the Arduino Uno has quickly become a board of choice among engineers and makers. The Arduino Uno Mini Limited, which is based on the ATmega328P (2-KB SRAM, 32-KB flash, and 1-KB EEPROM) microcontroller and offers a footprint of just 34.2 mm 26.7 mm 8 mm, was recently announced by Arduino as a miniature-form–factor variant. The GPIO on the Mini is identical to that found on the Uno, with 14 digital pins, six analog pins, six power pins, and LED pins. In addition to that, it has a ceramic resonator operating at 16 MHz, a reset button, and a USB-C connector. The Arduino Uno Mini Limited Edition is a commemorative product released to mark the sale of more than 10 million Uno boards. It is individually numbered and packaged in a special collector’s box. The Tinker Board 2 was made to compete with the Raspberry Pi 4 in terms of raw hardware performance, but it costs more than the Pi 4, which can be found for as little as $30. (depending on the model). Asus gave the Tinker Board 2 a Rockchip RK3399 SoC with a dual-core ARM Cortex-A72, quad-core ARM Cortex-A53, and Mali-T860 MP4 GPU, along with up to 4 GB of RAM and 16 GB of storage. Like the Pi, the Tinker Board 2 has a 40-pin header for connecting a variety of add-ons. It also has an HDMI port, a USB Type-C port, and a 22-pin MIPI DSI header for connecting cameras. RTL8211F-CG GbE LAN and an M.2 slot for 802.11 a/b/g/n/ac wireless and BT 5.0 connectivity options (2T2R). Asus has also added a number of ports for connecting accessories, such as three USB 3.2 Gen 1 Type-A ports and one USB 3.2 Gen 1 Type-C port. As a drop-in replacement for the original Zero W, the Raspberry Pi Zero W maintains its position as one of the most affordably priced ($15) SBCs available. A Broadcom BCM2710A1 chip with 512 MB of LPDDR2 SDRAM and an RP3A0 SiP with a quad-core 64-bit ARM Cortex-A53 CPU is installed on the board. Furthermore, it features a microSD card slot, a CSI-2 camera connector, a USB On-The-Go port, and an unpopulated footprint for a HAT-compatible 40-pin GPIO header. Options for wireless connectivity include a 2.4 GHz 802.11 b/g/n wireless LAN, Bluetooth 4.2, Bluetooth Low Energy (BLE) compatibility, and modular compliance certification. The PocketBeagle from BeagleBoard is an SBC with all the features of the BeagleBone but in a more portable form factor. To make the PocketBeagle as tiny as possible, the board was stripped of practically everything save the processor, GPIO, and power-regulation circuitry. The board uses the OSD3358 System-on-a-Chip (SoC) from Octavo Systems, which incorporates an ARM Cortex-A8 AM335x processor, 512 MB of DDR3 RAM, a power management IC from Texas Instruments (TPS65217C), a low-dropout voltage regulator from Texas Instruments (TL5209), and 4 KB of EEPROM into a 21 mm ball grid array. In addition to its dual 32-bit/200 MHz PRUs, 72-pin GPIO headers, micro-USB connection, and micro-SD slot, the PocketBeagle offer plenty of room for growth. Hardkernel’s ODROID-C4 is better than the now-defunct C2 in terms of performance. It is smaller and has the same layout as the Raspberry Pi 4. The board has a quad-core Cortex-A55 Amlogic S905X3 chip, 4 GB of DDR4 RAM, and a Mali-G31 GPU. The C4 is strange in that it doesn’t have wireless, but it does have Ethernet, HDMI 2.0 (4K/60 Hz output), and 4 x USB 3.0 ports. Hardkernel kept the standard 40-pin header that works with the Pi, but it didn’t connect the DSI and CSI pins. The board does have an eMMC slot and a micro-SD slot, though, so you can add more storage. Banana Pi has given more information about a new board in the BPI-R2 Pro line that looks like the Compute Module 3 for the Raspberry Pi. To use all of the platform’s features, you need a carrier board. It has a Rockchip RK3588 SoC with four ARM Cortex-A76 cores and four Cortex-A55 cores running at 1.8 GHz in ARM’s new DynamIQ configuration. The board also has an ARM Mali-G610 MP4 GPU, 128 GB of eMMC, and up to 8 GB of LPDDR4C RAM. PCI 3.0, SATA 3.0, 2 USB 3.1 Type-C, 2 Gigabit Ethernet ports, 3 USB Type-A ports, a micro-SD slot, and 3.5-mm jack and ribbon connectors are all options for adding to the computer. The new board also supports Caffe, TensorFlow, TFLite, ONNX PyTorch, Keras, and Darknet. It can encode 8K video at 30 frames per second in H.265, VP9, AVS2, and H.264 codecs, as well as VP9, AVS2, and H.264 at 30 frames per second. 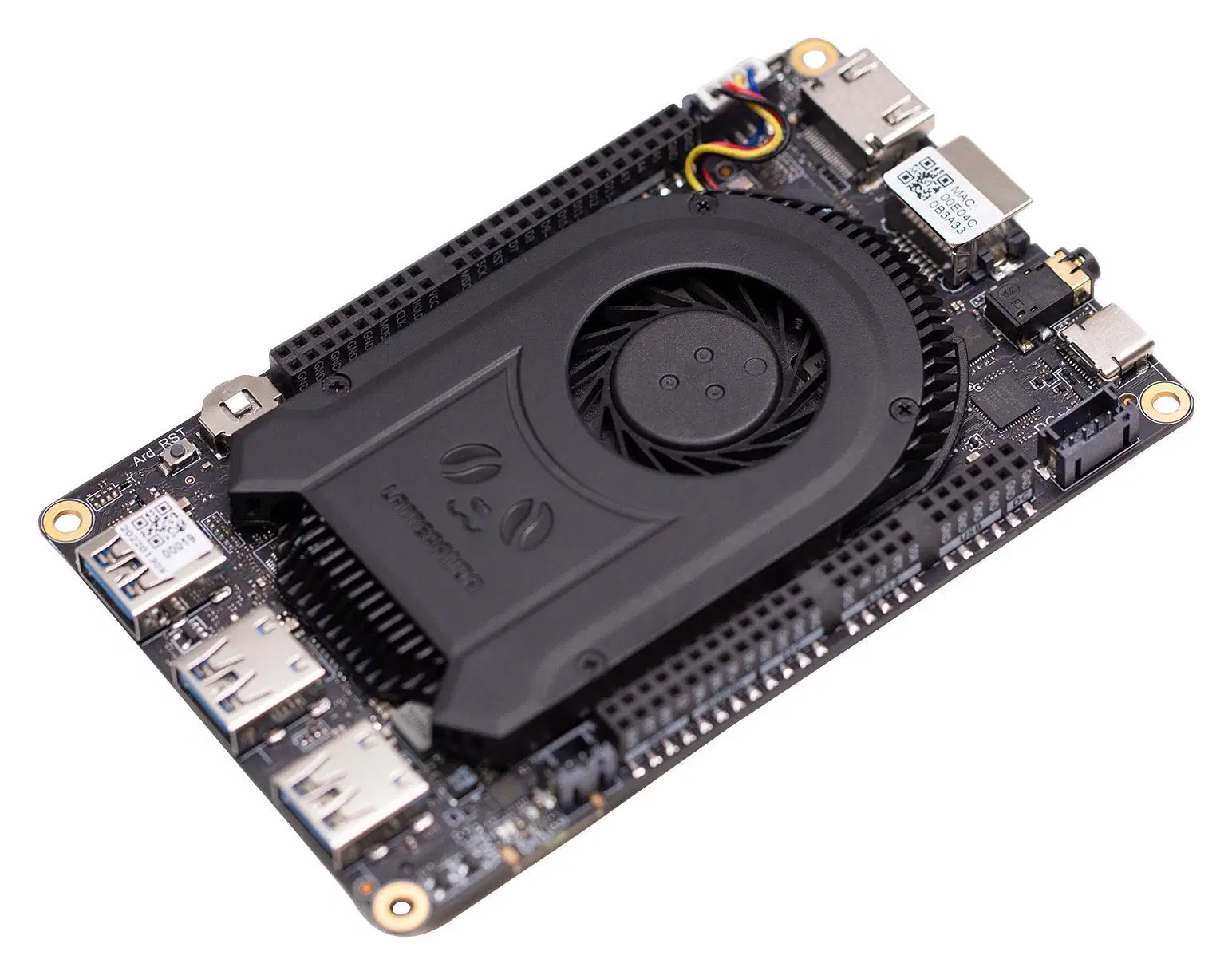 Odyssey (X86J4125800) from Seeed Studio is another great board that can use Windows 10 and the Grove ecosystem to make more applications. The main processor is an Intel Celeron J4125, and the co-processor is a Microchip ATSAMD21G18. It has an Intel UHD 600 GPU and 8 GB of LPDDR4 RAM, but it doesn’t come with any eMMC. You can buy 8 GB of eMMC separately, though. The Odyssey, on the other hand, has two M.2 PCI-e slots, a micro-SD slot, dual-band Wi-Fi, two Gigabit Ethernet ports, and BLE 5.0. There are also HDMI 2.0, two USB 2.0 ports, a USB 3.1 port, a USB 3.1 Type-C port, and a 40-pin GPIO header for more ways to connect. Udoo’s Bolt V8 is another board that blurs the lines between PC and SBC. The onboard processing power can even run AAA video games. The V8 has an AMD Ryzen V1605B processor with a Microchip ATmega32U4 co-processor and an AMD Radeon Vega 8 graphics processing unit (GPU). It also has two SO-DIMM slots that can hold up to 32 GB of dual-channel DDR4 RAM and 32 GB of eMMC storage. Two M.2 slots, Gigabit Ethernet, a Wi-Fi/Bluetooth module, two USB 3.0 ports, two USB 3.1 Type-C ports, two HDMI 1.4 ports, and two DisplayPort ports are among the other features (alternate mode via USB Type-C).