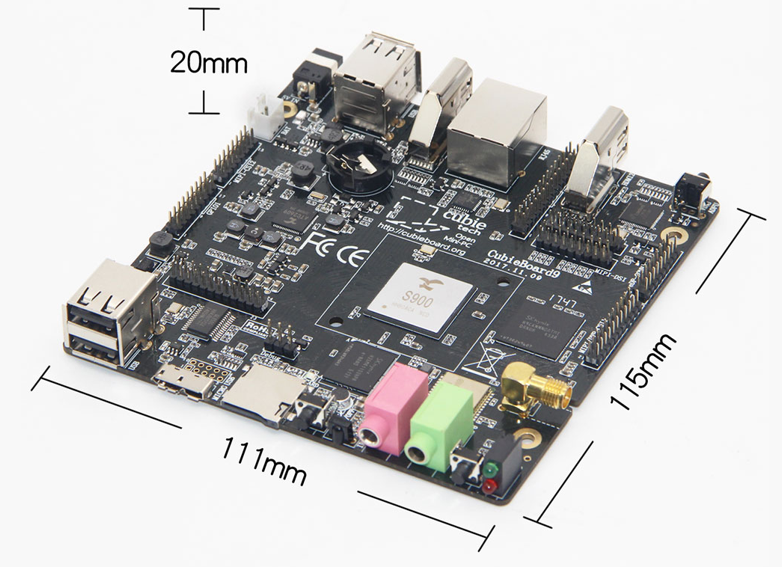 CubieBoard9 – An Actions S900 SoC Based SBC With 2x HDMI

CubieTech recently announced a new SBC CubieBoard9 on their product page. This SBC is yet unpriced and also not reached the CubieBoard.org community website. CubieBoard9 features a quad A53 Actions S900 SoC, 3GB LPDDR3, 16GB eMMC, WiFi/BT, and dual independent displays with HDMI, MIPI-DSI, LVDS, and eDP. Back in 2014, CubieTech announced Allwinner A80 based CubieBoard8 that was never launched in the market for some reason.

The CubieTech became an official distributor of Actions Technology application processors in July 2017 and since then they launched 4 open-source SBCs based on Action SoCs. CubieBoard7, built around the quad-core Cortex-A53 Actions S700, and the CubieBoard6, which instead taps the quad A9 Actions S500 are two of them. They also released the CubieAIO-S700 and CubieAIO-S500, two sandwich-style versions of their Action SoC based SBCs.

The CubieBoard9 integrates 3GB LPDDR3 and 16GB eMMC with a microSD slot. The product page mentions a 10/100 Ethernet port just like the CubieBoard6 and CubieBoard7. It lacks a GbE port for networking. Considering that the CubieBoard4 has a 10/100/1000 GbE port, it looks like a slight downgrade. But in terms of media interfaces, this new SBC is way ahead of its predecessor CubieDroid4. Now you get dual independent displays with a choice of 2x HDMI 1.4 ports for [email protected] video plus 2x LVDS and single MIPI-DSI and eDP interfaces. These are joined by dual MIPI-CSI connections and dual audio jacks. The CubieBoard9 also provides a wireless module with 2.4GHz/5GHz 802.11b/g/n/ac and Bluetooth 4.1 via an Ampak AP6255 module.

The key features of the CubieBoard9 are: